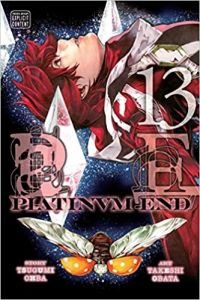 The battle of wits between Mirai and Yoneda continues with the bulk of the manga being taken up by Dr. Yoneda’s theories about the future and why there shouldn’t be a God. After a while, he requests to have a private one-on-one discussion with Mirai causing the others to leave; however, this was all part of Dr. Yoneda’s plan as he used Osamu to set a trap for the rest of the God Candidates.

During their one-on-one, Mirai and Yoneda talk about things such as happiness, sacrifice, predetermined futures, and some pretty deep philosophical things about humanity and their future. He then asks Mirai that if he can become God, what would he be willing to sacrifice. When Yoneda unveils that Saki is in danger of dying if he doesn’t surrender, Mirai chooses his own life over hers, thus creating a bit of a problem. People and Yoneda realize that Mirai’s priorities are Saki, then the rest of humanity, then Yoneda’s life. Yoneda questions how someone can become God by putting one person’s life above 7.7 billion others?

The showdown gets pretty intense after that and without spoiling much, Mirai gains a severe disadvantage; however, right when things are looking like they are over for Mirai… he’s saved by a certain someone which makes us question… was I right about Osamu all along?

As odd as it was, Mirai confessed his feelings for Saki during his discussion with Dr. Yoneda. Saki’s feelings have been returned and she even became a basis for Mirai’s own theory of happiness. Even Dr. Yoneda felt his statement had merit but still didn’t sway into believing what the true future would become 500 years from now.

Yoneda, on the other hand, continues to theorize that humanity will be extinct in 500 years. He claimed that is all based on science. Technology will advance and find a way to transfer the human conscience into machines or into younger flesh. Then, once humans achieve immortality through these methods, their curiosity still won’t be sated. They’ll want to master the next logical step: time itself. Not to control time but to see into the future. If humans live forever, they’ll want to know what futures are in store for them. Once they find a way to peer into the future, that knowledge will make life uninteresting and boring. What good is living forever and knowing everything there is to come? Humanity will begin to no longer desire life and, in 500 years, will make the conscious decision to go extinct by their own will.

It’s a pretty crazy theory but one that is highly interesting. While here in reality, you can see certain scientific advancements that may just end up leading to a future such as that. While semi-plausible, it’s still interesting to think about

Only one more volume of Platinum End to go. Yoneda is most definitely the final boss and we will see the results of the God Candidate Selection. For some reason, I can’t see Dr. Yoneda being swayed, therefore, I do see him dying; however, I think there’s going to be more to this than just his sacrifice. It’s very hard to predict the outcome but through some method or another, I really think Osamu is going to come out of this as the new God.

I see both Saki and Mirai dying; however, due to a Deus Ex Machina plot device, they don’t stay dead. Instead, Osamu somehow gives them what they want… a happy, peaceful life because of their own desire to not die.

Of course, I could be completely wrong and Mirai just ends up becoming God since he’s the main character and all of that. Otherwise, what was the previous 13 volumes of buildup truly worth? There’s a lot of ways this could actually go… including Saki becoming God after Mirai is sacrificed. It’s kind of fun thinking about the end of things but all will be reached in due time.

After all… our future with this series is already pre-determined. All we can do is live moment by moment and watch each present moment become an unchangeable past.

This item was provided for review by VIZ Media