Manga Review: Fly Me to the Moon Vol. 6 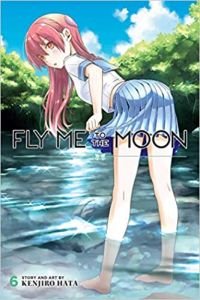 Fly Me to the Moon Vol. 6 has a couple of cute random events before it gets to the main event of the volume… going to a theme park! Up first, though, Chitose ends up meeting Aya at the bathhouse and develops a gaming rivalry with her. It was pretty hilarious to see the two of them interacting and it gave us a renewed sense of duty to make sure Aya is protected forever!

Next up, we are introduced to a new character named Ginga. He is Nasa’s cousin who came to pay him a visit with a problem… he found a stray cat and needs some help taking care of it. Nasa brings it to the vet to get checked up and then takes it in until he can find a home for it. Because of its brown fur and white square patch on its back, they name the cat Toast.

Then, we’re off to the theme park courtesy of a couple of tickets bought by Ginga to congratulate them on their marriage. Tsukasa is having a blast and, eventually, they run into Nasa’s teacher who is there on a date. In addition, Chitose and her maids show up and we get a stereotypical fireworks display for all of our lovely couples… and Chitose.

Ginga and Toast were the stars of this volume. Ginga has a… well… rather unique personality. He talks and acts like a yakuza member even though he’s just a regular high school student. Some of his lines are straight out of 1920’s gangster films and are incredibly corny but they make his character interesting. He even uses code words to describe basic stuff to make it sound as if he really is a yakuza member going out and performing epic jobs. For example, he talked about gang warfare which, in reality, meant class sports festival. Nasa is good at deciphering whatever he says but he is a handful at times. He’s still a fun character, though and I’d love to see more of him.

Toast has a lot of personality for just being a cat. Apparently, he likes Tuskasa a lot more than Nasa; however, Toast decided that instead of just hissing and clawing Nasa up, he is going to turn Nasa into his slave. Toast purposely wakes Nasa up at 5 AM to get fed and then snubs him to go lay down with Tsukasa. In fact, he only bugs Nasa whenever he needs something… whether it’s food, litter, or anything else. The rest of the time, he spends it cuddling with Tsukasa which makes Nasa wonders why Toast likes her more than him.

That was about it for the volume. The series isn’t exactly super deep but it is a nice way to sit back, relax, and enjoy a few laughs with some cuteness and that’s exactly what we got in this volume!

The theme park was a little too drawn out but that’s because I’ve seen this scenario in almost every slice-of-life series I’ve read. Eventually, the characters go to a theme park, a school festival, an onsen, the beach, etc. There are about five main tropes found in almost every manga story and since Nasa and Tsukasa are, quite literally, living in a bathhouse which could sort of count as an onsen, that one is like a free space on the anime trope bingo card.

So theme park it is and, of course, as with any theme park and/or festival, you have to have fireworks. It makes me wonder if this is what it’s really like in Japan and if people over there actually do anything else for fun aside from everything described in anime and manga. Although, I’d be lying if I said that I didn’t want to go and experience all of these tropes for myself one day!

Still, it’s another cute volume and if you’re already hooked on this series, you should find this latest installment enjoyable as well!