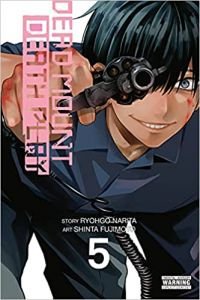 In volume five of Dead Mount Death Play, we are introduced to a few new characters and, because as such, Ryohgo Narita’s classic ability to tie multiple stories together is happening once again. In the last volume, Solitaire and Polka battled up on the roof of the building and it turned out that some Vlogger happened to catch the action. Now, the papers are debating whether or not it was one of Solitaire’s tricks or if it was paranormal activity.

Assuming it was the latter, a young journalist by the name of Eightport Kochou at the Weekly Dry tabloid takes interest in Polka as a fortune-teller; however, it’s not the only reason she is digging her nose into his business. She knows that a lot of events in Shinjuku are interconnected and she’s trying to get the scoop on it despite the fact that her story is going to only be run in the Weekly Dry Occult section.

Meanwhile, a really tall man by the name of Momoya Agakura has hired the former leader of the Sons of the Styx gang, Higuro, to help him. The Agakura clan employed snipers in order to take out Solitaire after he deployed his dirigible over the city. They receive a new mission after their snipers have absconded. They try to meddle in everyone’s affairs by killing Nishida, a bartender at Clarissa’s bar. After discovering where Nishida worked, he sets some plans into motion. They plant the body in the basement of the building that Polka is living in and wait in a building across the street.

Luck strikes them and the police show up based on tips involving a “mugging” which turns out to be Nishida’s murder. With Nishida’s body in the basement, all seems to be lost until Hosorogi speaks to Polka through the pen and Polka uses his necromancer powers to hide the corpse. Hosorogi states that this situation is extremely similar to his death five years ago.

Related  Manga Review: For the Kid I Saw in My Dreams Vol. 6

Since this has connections to Solitaire, Arase and Iwanome are on the case as well. This freaks out Higuro because he has a storied past with Arase. When Takumi sees that Arase is coming to do some investigating, he hightails it out of there and tells Polka to contact him via phone if he needs anything. Takumi flees back to his place but Momoya and Higuro are there waiting for him. Polka, sensing that Takumi could use protection, sends Misaki there in order to protect him. She ends up in a battle with Momoya and… well… the results of that battle is where we end our volume!

We have a couple of new characters in this volume so let’s dig in!

First off… Eightport… what a name! She’s a bit on the sassy side and definitely determined. No wonder she’s a reporter! As she pries deeper and deeper into Polka, she begins to connect the dots between a lot of different scenarios from the first four volumes… especially Solitaire. Because of this, her editor-in-chief wants to take her off the case because she is obviously trying to blow this story open when it’s not even her department. A compromise is reached for her to stay on the story but only if she sticks to the fortunetelling side of it.

Yeah, she’s not going to stick to that!

As a character, she’s definitely a reporter in the sense that she never gives up but she’s not really overbearing. She’s playing it safe and doing a lot more observing rather than prodding. She wants to get all of the information as she can so she’s definitely doing it in a way where she’s trying to watch her own back but since her editor sees through everything, I don’t think she did a good enough job. It also didn’t help that she was bragging about all of the connections she’s finding right to his face. That might have been the big giveaway to her true intentions. Just saying.

Higuro is probably the more interesting of the two new characters. He used to be the leader of the Sons of the Styx… the same gang that Takumi was a part of. One day, Higuro made a slip-up and it caused Arase, who had already become a cop at this point, to show up and single-handedly mow through all of their members. Their gang was decimated because of him so it’s no wonder Higuro doesn’t have any good feelings towards him. Why he’s helping Momoya and the Agakura clan is still up for debate but they are definitely involved with trying to silence Solitaire. The other interesting aspect is the fact that they keep mentioning Sarabamond… who was Polka’s master in the other world from 100 years ago.

Momoya is really tall and a very ruthless killer. He is a bit on a snarky side when he complained after one of his hit jobs that he could have died despite taking out his targets with ease. He seems rather obedient when it comes to the orders given to him… by whom is still a mystery. I have a suspicion as to who gave the order, though. For now, a lot is being masked about him and just who exactly he is but, for now, we’ll just view him as the really tall killer.

Another volume that was a lot to take in but you can see various paths intersecting and that is definitely one of Narita’s specialties. The same type of storytelling happened in Baccano and Durarara so it doesn’t surprise me that we are getting the same treatment here.

There was one part in the review I didn’t cover and that was Takeru Shinoyama telling Nezu to step down and take some time off. That was a very random thing to say and do in the middle of all of this and it wasn’t revisited in the rest of the volume. Given his underhanded tactics as well as his connections, I’m taking a guess that Nezu was given time off because Takeru was the one who contacted Momoya. With Takeru’s interest in the Fire Breathing Bug and the Bug’s new connection to Solitaire, it kind of makes sense and lines up. Plus, there is also the subtle hint of Higuro stating that connections are love. Well, if Momoya has a connection to Takeru, and Takeru is doing all of this in order to try and protect Polka under his father’s orders, wouldn’t that be a form of love?

The only thing that doesn’t add up about it is Momoya putting Nishida’s body in the basement of the building Polka was staying in. That would mean the police would find it and arrest him on suspicions of being involved with his murder. That doesn’t seem like they are protecting him to me. Takeru; however, is very cunning so maybe he has alternative plans?

Whatever the case is, it was just a small little theory I had. Only future volumes will tell me whether I was right or wrong!