ReZERO: Chapter 4 – The Sanctuary and the Witch of Greed Vol. 1 Review 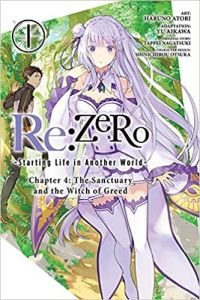 If you thought light novels had obscenely long titles, welcome to ReZERO – Starting Life in Another World – Chapter 4: The Sanctuary and The Witch of Greed Vol. 1.

The white whale and the witch’s cult arc is over(ish) for now! Even though we were introduced to two new members of the cult at the end of Chapter 3, we are taken to the events after that. Emilia and Subaru say farewell to Crusch and head back to the mansion with Otto as their driver. They were summoned to a place called Sanctuary by Roswaal but the problem is that they don’t know where it is.

When they get back to the mansion, we meet Frederica… a maid that was on leave by the time Subaru was introduced in the story. Now that she’s back, she’s watching over the mansion in Ram’s stead. There, Subaru reunites with Beatrice to some pretty interesting developments that I won’t spoil. After their meeting, Federica tells them about how to get to Sanctuary but to beware a man by the name of Garfiel.

As they pass into the Sanctuary’s domain, a pendant that Frederica gives Emilia starts to glow. Subaru grabs it and is transported to another dimension where he meets Echidna… the Witch of Greed! After a bit of a conversation with her, Subaru is returned and they arrive safely in Sanctuary. After meeting up with Roswaal, who is now bedridden, he informs them that those who enter Sanctuary are trapped… and this includes Subaru!

I left out a lot of details but there is a LOT going on in this first volume! There’s a lot of interesting character development as well as story advancement going on here. We also get a couple of brand-new characters that really shake things up in the story. We can definitely tell that there is a new story arc beginning and it is incredibly interesting… although… it may end up being a refresher course for those who have been keeping up with the television anime. This volume kicks off Season 2 Part 1 of the ReZERO anime series so if you’re reading it, you’ll know what’s coming in the next volume. If you haven’t seen it, perhaps this might interest you in checking it out and getting caught up!

I’ll skip over Subaru and Emilia as, honestly, they haven’t really changed all that much.

First off, we have Frederica. She was on leave due to personal reasons. She left three months ago; however, Subaru has only been in this world for, roughly, two months so he never got the chance to meet her. It was pretty hilarious seeing Ram take charge of cleaning the mansion only to neglect it and have Frederica pick up the pieces!

It’s pretty obvious that she has ties with Roswaal and the fact that she knows where the Sanctuary is suggests something deeper about her knowledge that she’s not telling us just yet. Still, she seems like a cool character and with her mouth full of fangs, I’m assuming she has some sort of beast powers akin to Rem and Ram’s demon powers. Typically people with teeth like that are beasts or shark-like members of the Akatsuki/Taka.

It was good to see Beatrice and, without going into spoiler territory, we did find out a bit more about the book that she’s always reading. It opens up a lot of questions about her true nature, though! All I will say is that she just got a LOT more interesting as a character!

Echidna is one of the many fabled witches of the world… the Witch of Greed to be more specific. She also makes delicious tea using liquids that were only thought to be obtained from Bell Delphine for a high price. She has a pretty keen interest in Subaru and almost seems to want to ally with him. Subaru ends up having a nice chat with her but it’s hard to really nail down what her true intentions are. It’s kind of funny that Echidna grants Subaru the opportunity to know anything he wants but all he wants to do is get back to Emilia. She grants him wish and they depart… for now.

Upon leaving Echidna’s “tomb,” he meets Garfiel. Right away, Subaru kind of recognizes him and puts two and two together, suspecting that he’s related to Frederica. I mean, it could be the teeth. (It was most definitely the teeth). Garfiel is… well… slightly vexed… all of the time. I mean, his Jimmies are in a constant rustled state if you know what I mean. It’s pretty obvious that he loves to get into a fight or two and is very protective of the Sanctuary. He is, no doubt, going to be trouble for Subaru later on.

ReZERO started a new arc and things are off to a hot and heavy start! We got some more world lore, got some new characters, met one of the witches of the world, and (most likely) arrived at a new savepoint that Subaru is going to return to many, many, many, many times! I mean, that’s how this series works, right? Present a problem, kill Subaru until the problem is solved, move on to the next problem!

Subaru is really dumb, though. I still can’t believe he was offered all the knowledge in the world and turned it down just to get back to Emilia. That’s some level of love right there that every girl should aspire to have in the man who is interested in her!

There are still lots of questions that need to be answered, though, but as we all know… they will get answered bit by bit. The only question we should be asking ourselves is “how much is Subaru going to suffer as we learn those answers?’ We’ll see in Volume 2!