Amazon is offering the standard edition with a $10 discount here (still listing it as Gods & Monsters). Gamestop has it listed at full price here as well Best Buy doing the same here. For PC users the game will be sold through the Ubisoft store (link here) and the Epic Game store (link here). 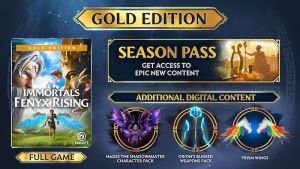 Along with the standard edition, Ubisoft is also offering a “Gold Edition” for the game that comes with a few in-game extras such as a season pass for future DLC, Hades the Shadowmaster Character Pack, Orion’s Blessed Weapons Pack, and Prism Wings. Preorders of any versions of the game will come with an in-game bonus quest titled “A Tale of Fire and Lightning” with completion of this quest earning you the Blazing Wings in-game item.

Immortals Fenyx Rising will be available for Xbox One, Series X, PS4, PS5, Switch, and PC on December 3, 2020. Owners of the Xbox One and PS4 versions of the game will get a next-gen upgrade for free if they get it within their console’s family.