In a recent press release from the official Star Wars website celebrating Star Wars Day that’s coming up on May 4, it was announced that the much-acclaimed Star Wars Jedi: Fallen Order by Respawn Entertainment would be receiving an upgrade for the PS5 and Xbox Series X|S this upcoming summer. While little was disclosed about the exact details of the new upgrade, one tidbit was revealed in that current owners of Fallen Order would get this upgrade for no additional cost. Both standard and deluxe versions already out for last-generation consoles and PC will also be on sale at 70% off its standard retail price from April 28 – May 12. 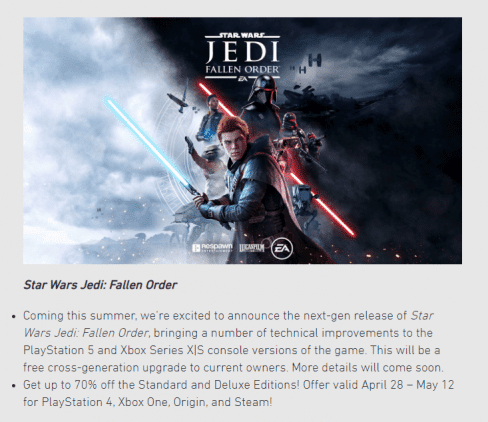 Interestingly enough, the last-gen versions of Fallen Order already received an official patch that utilized the extra horsepower of Microsoft and Sony’s new machines. The patch included improved framerates, higher dynamic resolution ranges, and enhanced post-processing resolutions. The fact that the title is receiving another next-gen upgrade could mean that more robust upgrades could be coming such as higher quality textures and possible Ray Tracing implementation.