Resident Evil Village arrives in just less than a week, but until then we have two demos for players to sink their teeth into. Previously, the two demos were set to only be available for a couple of weekends. However, Capcom recently decided to extend the demos for an extra week.

Still, players have only 60 minutes to explore both the Village Demo and the Castle Demo. To help, we put together a trusty guide to help you get through both of them in less than 8 minutes each. This way, you can use to rest of your time to replay them or explore the gorgeously creepy environments they take place in.

How much time do I have for the demos?

While the previous two weekends gave 30 minutes each, this weekend gives 60 for both. You can split the time up unevenly between the two. So if you want to spend 40 minutes in the castle and 20 in the village, you can do that.

Which one should I play first?

You can tackle either one of them first, but Village comes before Castle chronologically.

Which demo is better?

It depends on what you’re looking for. Resident Evil Village has more story content and cutscenes, while Castle has more combat and puzzle-solving. 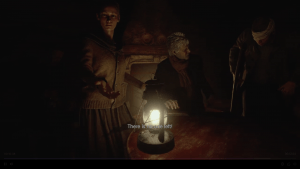 First off, the Village Demo has several cutscenes which take up a lot of time. If you’re looking to simply get through the demo, you may wish to skip them. That being said, the cutscenes shed a lot of light on what’s going on, so they’re worth checking out if you want to know about the story.

The demo opens an elderly Baba Yaga-like woman telling Ethan Winters the village isn’t safe. Skip the cutscene if you like and turn away from the red gates she goes through, and instead head towards the village. There is a house to the left with some items if you like, but it’s not necessary to go into it.

Entering the town square, you’ll see a statue of a young woman. Head past this and up the path where you’ll see a large gate with a torch on either side. You can’t go through here yet, but you’ll notice two openings for circular crests. If you turn up to the right, you’ll go through creaky black gates. Enter the church to find the first of these circular crests, the Maiden Crest. On a side note, the crest is surrounded by portraits of each of the four bosses of the game, with one of Mother Miranda above them. 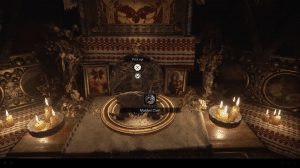 Not your typical church

Leaving the church through the back door, you’ll see a field up ahead. Hear some noises coming from it? Yep, those are werewolves- excuse me- Lycans. There’s a hut to the side with the shotgun and gunpowder, but since there’s very little combat in this demo they’re not really necessary. The game will tell you to ready your gun, but if you run through the field and stay away from the rustling grass you can avoid the Lycans completely. Try to open the gate at the end, and you’ll find it’s locked. But go to the small house near it and you’ll be told to shut the door behind you, which is a valid request. Here you’ll meet Elena and her father, who doesn’t look too great to be honest.

Elena will ask you to get those gates open. Head out the back window and over the broken wall, then open the gates from that side and let Elena and her father through to Luiza’s house. Make note of the little shrine by the gates, you can’t open it yet though. Knock on Luiza’s door and a young man with little manners and a lot of gun will answer it. Eventually, Luiza will let you all in, and tell you to wait for a moment. Peruse the picture book by the table if you like, but it’ll only take a moment for Luiza to come back and guide you into the main room of the house.

Here you’ll find the longest cutscene of the demo, but also the most story-driven. The few villagers left talk about how Mother Miranda was supposed to protect them and that the Lycans have brought their number down low. Right on cue, Elena’s father will turn into one and bring that number down even lower. He’ll come for you next, but Elena will shoot him just as he’s about to chow down.

Entering the garage, you’ll find a truck but of course, no keys for it. Go through the house until you reach the kitchen, and open the green drawer to the left of the sink. You’ll find a seemingly normal key, which will prove to also have a screwdriver hidden in it for reasons that aren’t clear but will be by the end of this demo. Return to the truck and ram it into the wall. Then ram it into the wall again. Then get out because everything’s on fire.

Head up the wooden paths with Elena until you reach the attic. You did it! You’re going to get Elena to safety and find your daughter! That is until Elena’s Lycan father returns, and let’s just say Ethan is not likin’ what happens next. Elena and her father meet a sad, fiery end. Head out the window and drop-down back to the front of the house. You can now open the small shrine with the screwdriver and get the Demon Crest. 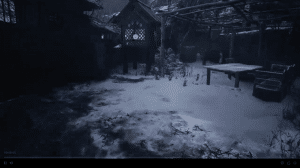 Time to use that screwdriver

As you open the gate next to the shrine again, you’ll hear screams, and arrive just in time to get your first real glimpse at Mother Miranda. Though she’s no Lady Dimitrescu, she seems pretty tall. Head back through the field, past the church, and up to the gates with the crest-shaped openings. Put the Maiden Crest into the left slot and the Demon Crest into the right, and turn them until you have what looks like a Maiden and a Demon, respectively. Ethan will head towards the castle, closing out the Village Demo.

The Castle Demo doesn’t have nearly as many cutscenes as the Village Demo, so you won’t have to worry about skipping them to make the most of your time. However, the Castle Demo does have more items to collect and rooms to explore, so you can wander around if you have the time.

The demo starts with Ethan waking up in a bedroom, but on the floor instead of in the bed. Too much drinking, my guy? The Crimson Glass seems to suggest so, feel free to grab that off the desk in front of you. Then turn around and go through the big white doors into a room with some fruit and a locked door. Guess you’ll just have to crouch down into the fireplace, where you’ll find a small passage after examining it.

At the end of the small passage, you’ll find a slightly bigger passage that will at least allow you to stand. Grab the Maroon Eye Ring from the statue at the end, at which point a secret passage will open. Head past the statue and through the doors to the left.

You’ll enter a grand hall where several statues will come up from the ground. Yes, it’s a puzzle, but you can’t complete it in this demo. If you head through the small door immediately across the hall you’ll meet The Duke. You don’t have to visit him, but he’s happy to sell you some wares, including a shotgun you have JUST enough money for.

Regardless, head up the stairs from the main hall into a large, fancy room with a large, fancy chandelier that would make even Sia jealous. Go up the curving staircase and ignore the doors to the left and front unless you want some exposition. Instead, head to the right and down the hall where you’ll find a locked door with an engraving of a face with one eye. Hmm. If you haven’t figured it out yet, open your item list and examine the Maroon Eye Ring you have to get a Maroon Eye. Pop that into the face and open the door…

I regret to inform you they do bite

Clattering down the hole you’ll find yourself in a storeroom. Head through it until you find another small passageway you can crouch into at the end. As you crawl through, you’ll spy Lady Dimitrescu at the end, everyone’s favorite extremely tall vampire lady. Unfortunately, or rather, fortunately, she leaves just as you enter the room at the end. Pick up the handgun ammo on the shelf if you like and then head around the table and down into the dark passageway.

Things will lighten up quickly, as you’ll spot a brazier with fire in it. For this puzzle, push the brazier into the two unlit lanterns to open a new passage. Heading into the pitch-black passageway, you’ll turn on your flashlight and find yourself in a jail cell. Or a torture dungeon. However you want to look at it.

Head through the various cells and don’t mind the body-shaped sack that falls on you. It’s probably just grain. Probably. As you turn the corner, you’ll come face to cloaked face with what looks like Emperor Palpatine. Blast him if you like, and a few more will arrive. Now that you know where all those Palpatine clones from Star Wars: Episode IX ended up, feel free to shoot them or run past into the small light-filled courtyard and up the stairs back into the castle. 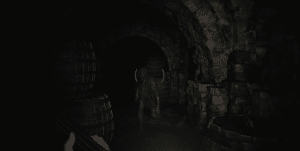 Once again in another jail, you’ll see another insect swarm. Fun. This one is named Bela, as it is also a vampire as you will soon see. Head through the cells and up another flight of stairs and then to the right. Examine the boards to the left, at which point Bela will knock you down and offer you a big ole’ vampire smooch. Ethan doesn’t seem pleased, but he is a married man after all. The screen then cuts to black, and that’s the end of the Castle Demo.

And there we have it for both demos for Resident Evil Village. Again, there are a few Easter eggs, items, and places to explore for both. These walkthroughs are just to get you through both as quickly as possible. Hopefully, they do just that. And if you enjoy the demos, the full game of Resident Evil Village arrives on May 7th.