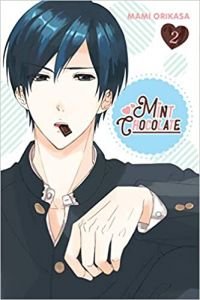 Volume two of Mint Chocolate picks up with Kyouhei and Nanami being left home alone while their parents are out of town. The antics continued which included a random classmate showing up at Nanami’s house and needing to use the bathroom. She had to do her best to hide Kyouhei which caused him to go out the bathroom window while his hair was still wet. This plays into another scenario where Kyouhei catches a cold and a fever leading to Nanami having to take care of him… and he takes care of her in a completely different way which leaves her flustered, confused, and embarrassed!

That one moment sets up the rest of the volume where things are a bit awkward between the two of them. It becomes a constant guessing game with Nanami on whether or not Kyouhei likes her, hates her, etc. Kyouhei was feverish so he didn’t remember what he did to set Nanami off and make her a bit of a recluse; however, after recalling the fever dream that he had, he realized that part of that dream wasn’t actually a dream. This leads Kyouhei to make things worse by completely avoiding Nanami. He’s even colder to her (if you can believe that) and that, in turn, really screws with Nanami’s feelings.

They try to reconcile through Christmas as they have a tradition to go see the Christmas lights in town. She invites Kyouhei but he flat out refuses. Of course, there needs to be a mechanism to get them to make up and that comes in the form of their friend Andou. Andou offers advice to both Kyouhei and Nanami and, of course, it gets Kyouhei to go see the lights with her. Still, it’s not enough for Nanami and she ends up have a chance conversation with Kyouhei’s father who explains the situation with his mom just walking out on them and how it has caused Kyouhei to be a bit pessimistic when it comes to love.

This all sets up the ending to the volume which leaves us on a bit of a cliffhanger… one that may be coming too soon and one that I think will lead into some misdirection come next volume… or… Orikasa-san will commit and gives us the words we want to hear!

There wasn’t much in the way of development in this volume which is odd since a second volume is usually reserved for initial character development.

The biggest focus was on Kyouhei. A lot of the interaction between himself and Nanami was more or less story development than character development but we did get some clues through Kyouhei himself as well as his father about what happened to him in their past. Kyouhei truly resents his mother finding another man and just walking out on the family. His fever dreams painted that picture and this his father reaffirmed that when he had his talk with Nanami.

Plus, the whole ordeal made him pessimistic towards love; however, some of Kyouhei’s actions say otherwise. I think it all goes back to what Andou said to Nanami about all guys being cowards and how it takes one person to show them what fear is like. It’s kind of true. For most men, when they find that one girl that they are really in love with, it’s difficult to talk to them and even worse when it comes to thinking about asking them out. They don’t want to embarrass themselves, they don’t want to feel the sting of rejection, etc. It really does bring out that fear in all of us and so it is true that all guys are coward.

Now, imagine being Kyouhei. You don’t care for love because you felt abandoned as a child but, suddenly, you found something that could reignite the love inside of you. Not only are you scared over the ordinary potential consequences of falling in love but you’re also scared because you’re afraid to trust after everything that has happened to you. Your natural reaction would be to become cold and distant until you could build up enough trust and/or figure things out for yourself.

When you think about it in that aspect, it really fits Kyouhei’s character perfectly and explains his personality on so many levels.

While the first volume felt rushed, the second one had much better pacing! I like how they took the time to explore the situation between Kyouhei and Nanami. Even though it took up the majority of the volume, it gave us some better insight into how both of them feel about each other and the roadblocks they both face as a result.

Even in the first volume, it was made obvious that they both love each other and that was reaffirmed in the second volume as well. With Kyouhei’s past being exposed (albeit not entirely but enough to give us a good understanding), it put a lot of things into perspective. It still doesn’t excuse Kyouhei for being a complete and total jerk to Nanami 24/7 but it does justify it slightly. There were some flashes of kindness in there which are more akin to chinks in the armor.

With the way the volume ended, everyone is expecting volume three to start a certain way; however, I truly believe it’s all misdirection. It seems a bit too soon to go down that path and even if they do pull the trigger on it, I’m sure it’s not going to be like a light switch that gets flipped. Stories like this tend to drag things out so even if it gets said, I don’t think anything will come from it outside of some more awkwardness. We’ll probably continue to see them squabble with one another and create more tense situations where they are going to end up second-guessing what they end up saying to each other. That’s just my prediction, though. I could be completely and totally wrong.

Only way to find out is to bring on Volume 3!