A TV show with millions of fans across the globe is bound to have astute viewers predicting where events are headed — especially if the show is based on beloved media like Marvel comics. The constant online discourse is healthy and fun to an extent, but it can also feel a lot like having a surprise spoiled. It takes away from twists that would otherwise be shocking, and that’s one big reason why this week’s WandaVision installment feels a little disappointing.

If you haven’t seen episode seven, “Breaking the Fourth Wall,” turn back now. Spoilers ahead! 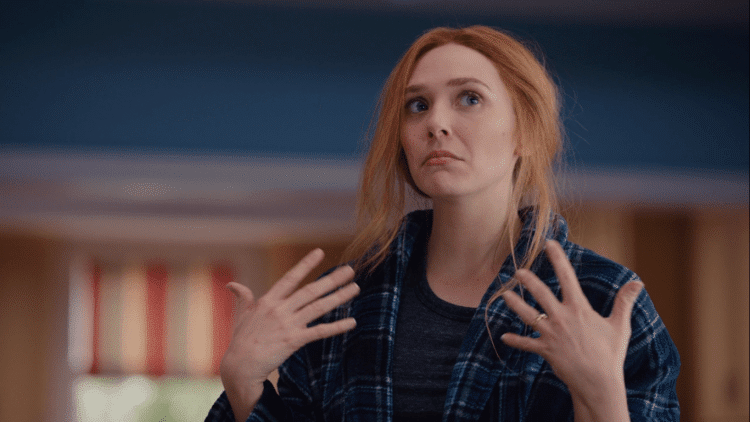 Agatha Harkness’s villainous reveal may have been predictable, but it salvaged an episode that seemed bent on keeping its characters from having fun. Vision (Paul Bettany) spends its second half sitting at a traffic light, and Darcy (Kat Dennings) is released from the SWORD circus before taking part in any wild acts. Wanda (Elizabeth Olsen) spends her time moping around the house, while Jimmy (Randall Park) and Monica (Teyonah Parris) meet with Monica’s highly anticipated “contact,” who turns out to be a generic SWORD agent.

Marvel productions should aim to be fun before anything else, and WandaVision seemed to understand that in the way the best MCU movies do. It has a different brand of humor than the Guardians of the Galaxy films, but episode 2’s magic show starring a drunken Vision was almost as funny as Rocket mocking Taserface. Like Spider-Man stealing Captain America’s shield on the tarmac, Evan Peters standing in the Visions’ doorway felt like a seminal MCU moment that would change the universe forever. “WandaVision” executed every scene to perfection in earlier episodes, racking up laughs and smiles from its sitcom within a Marvel movie concept. 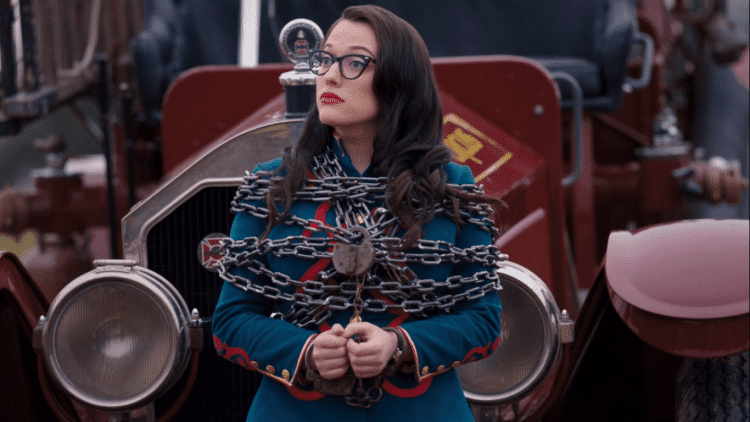 It doesn’t take away from what came before, but the show’s previous success makes this week’s underwhelming mockumentary tribute even more disappointing. Shows like The Office are among the funniest television has ever seen, but “WandaVision” is shockingly sterile. Pre-Agatha reveal Agnes (Kathryn Hahn) delivers a couple of excellent cutaways, but she, Wanda and Vision are the only characters to sit in a chair and look at a camera more than once. Darcy, a notoriously sarcastic MCU funny girl, having only one interview feels like a cardinal sin and a waste of Dennings’ talent.

After seeing Paul Bettany’s comedic chops in the show’s first three episodes, it’s clear that WandaVision has erred in its direction for Vision. He is as straight-laced as they come in the movies, but that doesn’t mean he should be here. Bettany’s facial expressions and comedic timing can carry scenes, but he’s been pulled away from the “com” part of the sitcom and placed on a serious mission to fix the Hex. His role this week is a little more lighthearted than last week, but after two scenes he’s stuck in a car listening to an exposition dump. With just two episodes remaining, I don’t think we’ll get to see much more of funny Vision, and that’s a bummer. 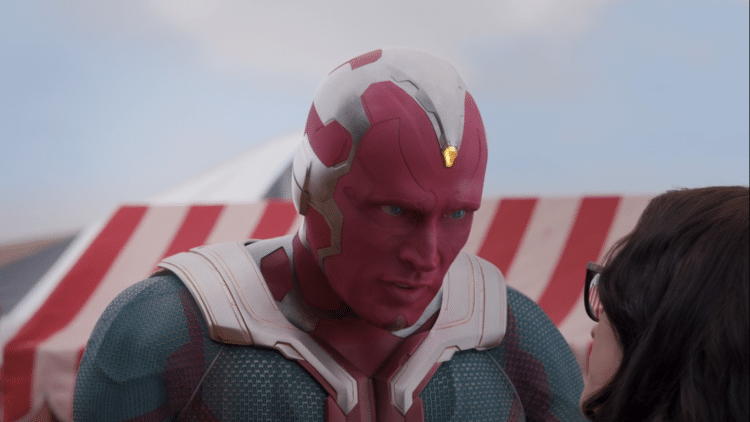 While Elizabeth Olsen has done a phenomenal job bringing Wanda to life as a sitcom mom, she also feels misused in the wake of Agnes’ villainous turn. Olsen looks most comfortable portraying the character’s more dramatic side, from turning soldiers against SWORD Acting Director Hayward (Josh Stamberg) to mournfully reflecting on the death of her brother Pietro.

Instead, she has been tasked with almost single-handedly carrying the lighthearted sitcom stuff. She’s more than capable of doing it, and this week she turns in some of her funniest work yet. When her concerned offspring ask who Uncle Pietro is, she masterfully replies “I’m your Mom, and as such you were counting on me to have all the answers, right? Well, I don’t! … I’m starting to believe that everything is meaningless.” Tommy and Billy may be ten, but you’re never too young for a lesson in Friedrich Nietzsche nihilism! 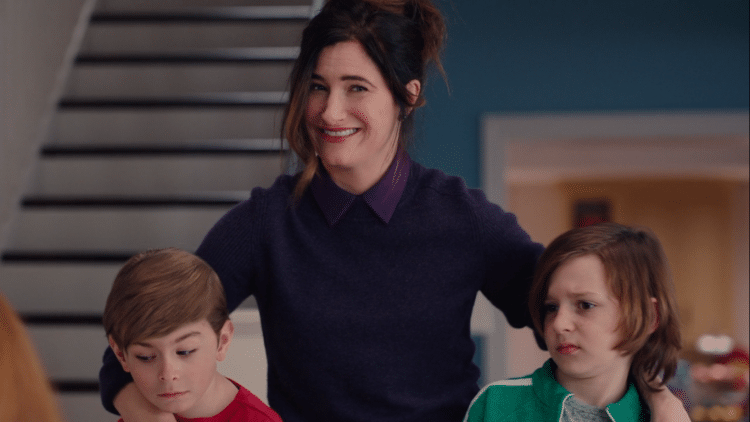 Even so, WandaVision’s closing episodes would be far more intriguing if the Scarlet Witch and her trauma were the show’s big bads. There are hundreds of fiction stories that plunge into the depths of grief, but the cartoonish nature of the MCU actually makes it uniquely capable of providing an interesting take on coping with losing who you love. Raphael Bob-Waksburg, creator of “BoJack Horseman,” notes that stories that feel separate from the real world are capable of hitting dark themes without driving audiences away. The “very dark” meeting the “very wacky” can lead to some profound, yet entertaining stories.

The Agatha Harkness reveal guarantees that won’t be happening. Instead, we’re likely to watch to a more traditional MCU final boss fight. That’s not the worst thing in the world – there’s a reason the MCU has been so successful — but WandaVision has been more than just another Marvel offering so far. After this week, it doesn’t feel quite as special.

MVP: Kathryn Hahn – Despite all my criticism, the Agatha Harkness reveal was perfectly executed, even if I wish the show went in a different direction. It’s one of a few genuinely fun moments this week, as Kathryn Hahn gleefully revealed her treachery and turned WandaVision into “Agatha All Along.” Hahn’s performance in her show’s intro sequence leaves no question that she is perfect for the role. She’s both funny and insidious, and her “I killed Sparky too” line is an electric mic drop. 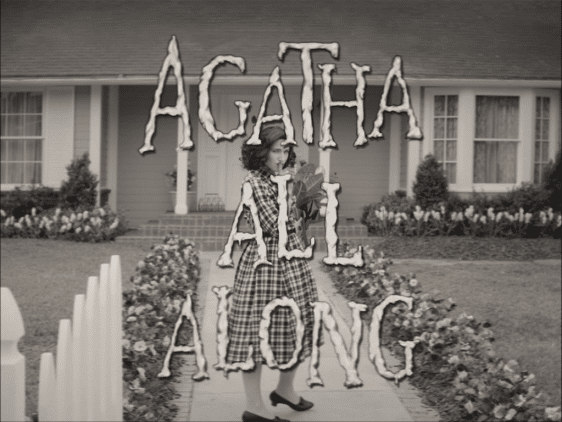 Most Improved Award: Jimmy Woo’s Concerned Scream – Back in episode 4, Woo delivered the most underwhelming concerned scream of all-time when Monica got sucked into Westview. When she once again charges the Hex in “Breaking the Fourth Wall,” I was getting ready for another round of ripping Randall Park for a pathetic shout (he has been very good in the series overall, but that scream was bad.). Instead, he delivered a very convincing shout! The chemistry between Woo and Rambeau has come a long way.

Least Surprising Development: Monica Became A Superhero – Wow, crazy! I can’t believe she got those powers. Rough Monica episode, even if the shot of her fighting through the Hex was dope. She deserved a better power discovery scene. I’m also not entirely sure what her powers are.

Gallant Award for Responsibility: Tommy and Billy Using a Rubber Wii Remote Cover – Wanda will never need to throw out a TV with a Wii Remote sized hole thanks to her responsible children. They may not have been using the wrist strap, but kudos to them for following the safety manual.

Greatest Darcy Moment: “Oh Your Bad Back!” – When Darcy was under Westview’s spell, she was at her all-time best. Just about every one of her lines was a winner. (“Not likely. I’m notoriously self-involved” is my GDM runner-up.) The funniest line came right when Vision went to snap her out of her trance. He distracted her by pointing to a mime “dropping” a heavy tray, and she turned and sincerely shouted “Oh, your bad back!” Great writing, better delivery. I wish we got more mind-controlled Darcy. Maybe it’ll happen next week.