I felt I was going to be at a disadvantage going into Monster Boy and the Cursed Kingdom. The game is the spiritual successor to 1989’s Wonder Boy: The Dragon’s Trap, a Master System game that apparently is widely beloved by a generation. Despite fancying myself a platforming aficionado, I never heard about Wonder Boy until its remake caught my eye in 2017. I never did buy it, but after playing Monster Boy and the Cursed Kingdom, I may very well have to.

Don’t worry if you haven’t played its predecessor – outside of a few easter eggs, Monster Boy is an entirely new experience. Developed by Game Atelier, Monster Boy and the Cursed Kingdom puts fun twists on the Metroidvania genre and combines them with strong controls and top-notch presentation. If you enjoy games like Hollow Knight, I highly recommend giving Monster Boy a look – $40 price tag and all. 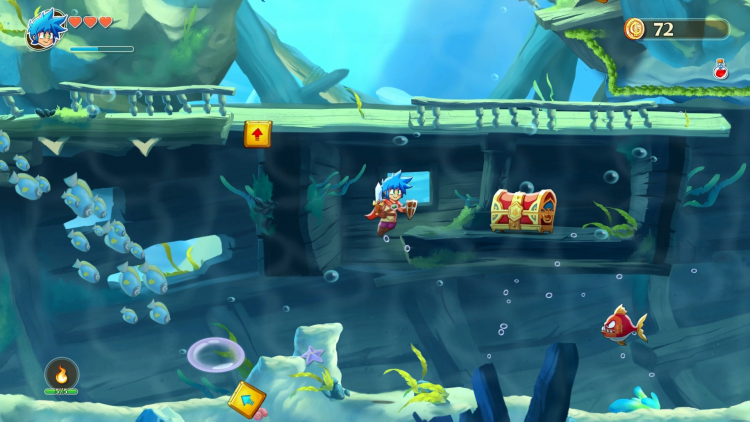 Back in December, FDG Entertainment announced that Monster Boy sold 50,000 copies and thanked fans for supporting “premium and quality gaming”. Premium describes Monster Boy and the Cursed Kingdom perfectly. The game is packed with content that goes the extra mile. There’s a beautiful anime introduction sequence, complete with an original tune available in both Japanese and English. The hand drawn artwork pops off the Switch’s screen in handheld mode (my preferred way to enjoy the title), with charming animations for friend and foe alike. The score stands out as well. I can’t stop whistling the Village of Lupia theme, but everyone will have a different favorite. 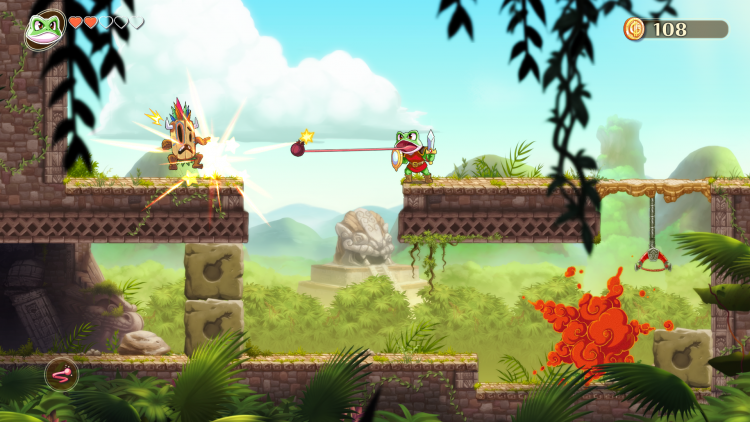 There’s even a fleshed out narrative to follow, completely unnecessary to enjoy the game but nice nonetheless. It stars Jin, a blue haired hero, as he tracks down his mad Uncle Nabu. Nabu has turned the residents of Monster Land into animals, and it’s up to Jin to reverse the curse. You won’t be surprised by how the events unfold, but I enjoyed the story for what it was worth.

The characters you meet along the way are memorable, even if the plot isn’t. Jin and his brother Zeke have some fun, well written dialogue, and Pepelegoo’s animations are just so charming. That goes for everyone, really. When an aztec-styled minion hits you with a bomb, it covers its mouth and laughs for a few moments. There’s this ninja rabbit hanging out in the background of the Lupia Village, and even though you can’t interact with him he just looks so cool. It’s a premium game, packed with little touches that elevate it above your standard platformer.

A Blessing and a Curse – Mastering Jin’s Six Forms

About 15 minutes into the game, Jin gets transformed into a pig and looses access to his human form. He gets dropped into some sewers, with seemingly no way to escape. Fortunately, pig’s snouts can smell secrets, so Jin sniffs out a hidden door and begins his journey in earnest. Before long, he’s slinging lightning spells as a pig, transforming into a frog to sling across chasms, and soaring through on-rails shoot’em ups as a dragon. 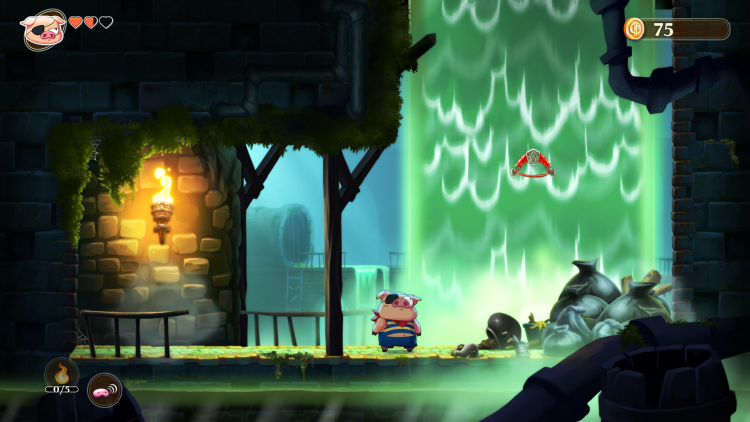 These transformations are the key to Monster Boy. There are five different animal forms to unlock by defeating bosses, ala Mega Man. The pig, snake, frog, lion, and dragon have dramatically different abilities that change the way you play the game. Each serves a unique purpose, so you’ll never be able to just stick with one. Even after unlocking the powerful dragon, you’ll have to revert back to pig form to solve certain puzzles.

Some transformations are more fun than others. I really didn’t care for the pig after the first act, as he can’t equip gear, swim, or move quickly. The snake can cling onto mossy walls and slip into small nooks, but I had trouble with the controls when I need to cling to a ceiling. I would often get stuck on corners despite holding the stick, which is very unfortunate when lava is coming to roast Jin to a crisp. The frog was wonderful, as his tongue could stick to hooks and sling Jin through the air. Charging through tight corridors as the lion was my favorite part of the game. He can run on water and leap into the sky to smash through rocks. Finally, the dragon empowers the player like no other. His flame breath and unlimited flight makes both combat and platforming a breeze, but you get him so late that those abilities feel earned. 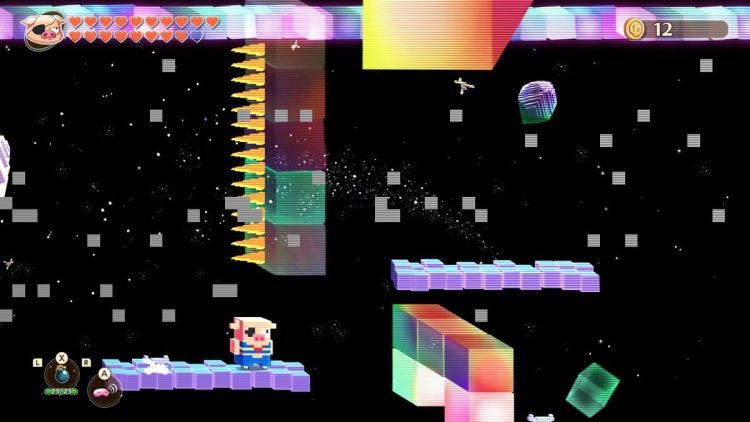 You see that multicolored bar in front of me? That’s not a platform.

For the most part, the platforming is rock solid. That said, the game’s gorgeous art occasionally hurts the gameplay. Throughout the adventure, I found myself leaping onto a what appeared to be platform only to fall into the abyss below. The background and foreground can be a bit tough to differentiate from actual platforms. Enemies scattered throughout can make these segments a little too frustrating as well. For some reason, only Jin’s human form can attack above his head with a sword. I can’t tell you how many times a bat dropped above me at a 45 degree angle and knocked me off a ledge because I couldn’t swing at him cleanly. Those moments were really frustrating, and they happen quite often.

The biggest problem with Monster Boy is that it never explores every transformation to the fullest. I would play an entire game based around the frog’s gameplay style, but Monster Boy and the Cursed Kingdom never got overly creative with how his skills were used. Although the game is hard in an odd sense, its platforming segments never hit the challenging peaks I thought they would. It’s a lot of fun to transform into a Lion to run across a lava pit as a ceiling slowly falls to crush you, transforming on the fly into a snake to squeeze into a gap, and then into a frog to grab a hook before falling to your doom. That said, those moments are a little too few and far between. 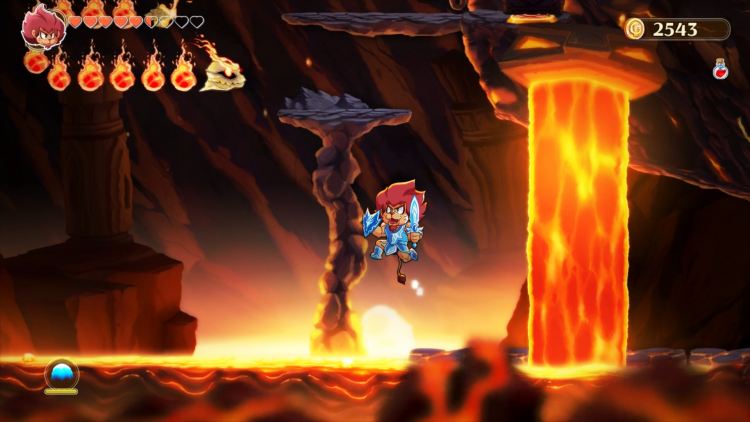 Commitment to premium hurts Monster Boy and the Cursed Kingdom in that way. The gameplay is varied to a fault. Instead of simply focusing on making a great platform game, Game Atelier squeezes in so much additional, less enthralling content. You’ll traverse a haunted mansion that focuses on puzzle solving, which freezes your momentum and leave you scratching your head. Most of the puzzles are simple enough, but I got stuck on one because a visual cue made me believe I needed to hit a switch somewhere when all I needed to do was strike a mirror that looked a whole lot like an intangible foreground item. There’s a stealth mission as well, and while it works, it’s just not particularly fun. More isn’t always better, and I would have preferred more speedy platforming over the game’s slower moments.

There is a lot of gear to collect in Monster Boy and the Cursed Kingdom, and it enhances moment to moment gameplay. You buy various boots, bracelets, weapons, and armor sets in shops scattered throughout the world, upgrading them with gems found in treasure chests. For the most part, these are optional, although you will need a few specific items found by exploring. 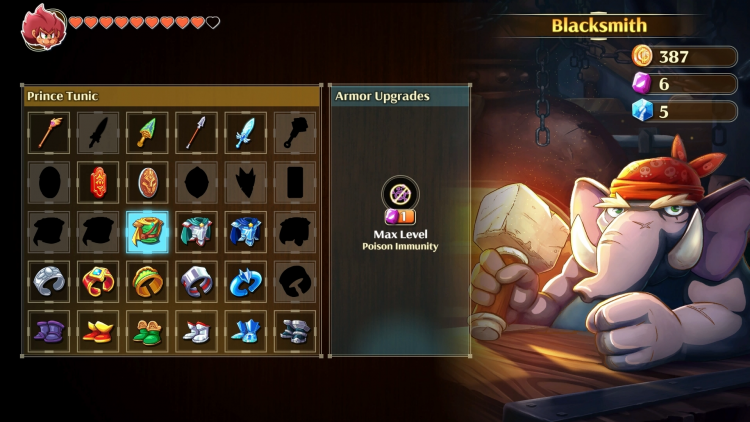 Crimson shoes melt ice beneath your feet, while cloud boots let you double jump and run on clouds. The ice sword can freeze enemies and objects, creating platforms that reveal new secrets. The prince tunic makes you impervious to poison, and knight mail prevents confusion. You could absolutely clear the game without having most of these in your collection, but they make certain challenges easier and give you more to do.

These items are expensive though, a little too much so. A golden version of each type of gear has five parts hidden through the game, and once you find them all you need to pay $1,000 to forge them. Most regular gear costs $500 each. After beating the game, I was still missing one weapon and three gold gear just because I didn’t have the money for them. You only make cash through killing enemies and opening chests, and they don’t drop enough to give you the money you need to 100% the game. That means grinding, and for me it wasn’t worth it.

Monster Boy and the Cursed Kingdom Compliments and Nitpicks 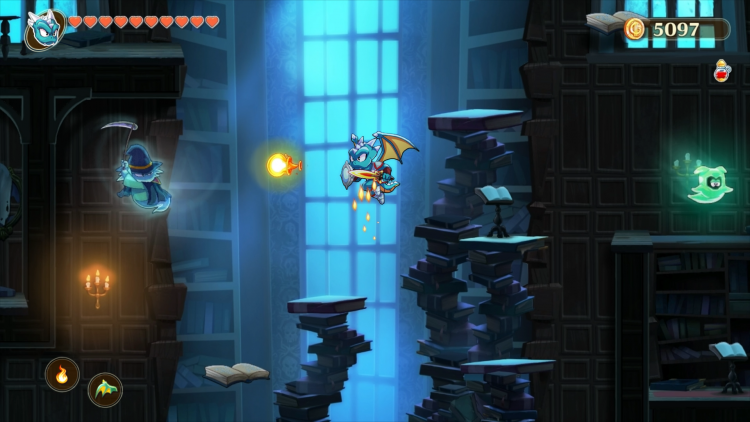 Without dragging on for too much longer, here are a few little extra pros and cons:

Monster Boy and the Cursed Kingdom lives up to its premium billing thanks to tight platforming, amazing presentation, and well-hidden secrets. I don’t think the game justifies its $40 price tag for everyone though. For Wonder Boy fans, this is a must buy. For platformer lovers, it shouldn’t be missed. That said, there are platform games that provide a little more on the gameplay front for less. You should get between 15-25 hours of gameplay here, depending on how much you want to 100% it. I really liked Monster Boy and the Cursed Kingdom, and would recommend it to just about everyone when it’s on sale next. 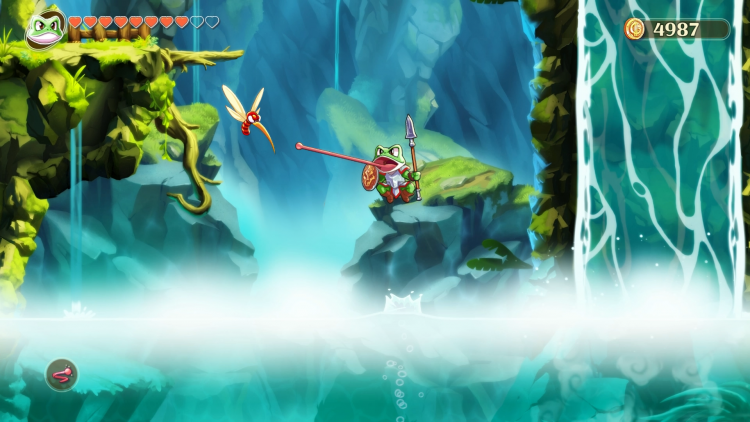 Review Disclosure Statement:A retail copy of Monster Boy and the Cursed Kingdomwas provided for review purposes. For more information on how we review video games and other media/technology, please go review our Review Guideline/Scoring Policy for more info.

Monster Boy and the Cursed Kingdom brings a long dormant franchise back into the limelight for a whole new generation to enjoy.