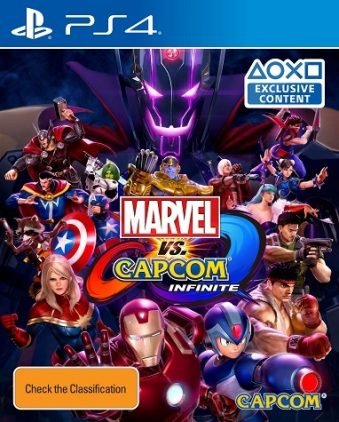 The Marvel and Capcom universes collide as heroes and villains battle together to save their merged worlds from a sinister new threat, Ultron Sigma. A combination of the robotic foes known as Ultron from the Marvel Universe and Sigma from the Capcom Universe, this psychotic villain is obsessed with infecting all organic life with a cybernetic virus. History’s greatest gathering of warriors must now unite to fight back against Ultron Sigma and save their newly formed world.

What follows is a story about collecting the Infinite Stones and using them to stop Ultron-Sigma before he can turn the whole world into its robotic slaves. Along the way, you will get some hints at other sub-stories like a cool little tidbit about A.I.M.brella (The combined Advanced Idea Mechanics and Umbrella… how cute) taking soldiers and combining them with the T-Virus and Symbiotes! Another subplot has the mad titan Thanos taking the power of the Satsu no Hado from Ryu to destroy Mistress Death. But overall the story is just like Pokemon: Gotta Collect’em All. Frankly, it’s a boring plot with some characters only appearing as a tease of what you can get when you drop that $30 on a character season pass. The lack of fun and much more entertaining characters like Wolverine is really felt. It will likely stay this way as the House of Mouse refuses to let the X-Men play along with everyone – Since Fox owns the movie rights. Yet, somehow not the gaming or comic rights. 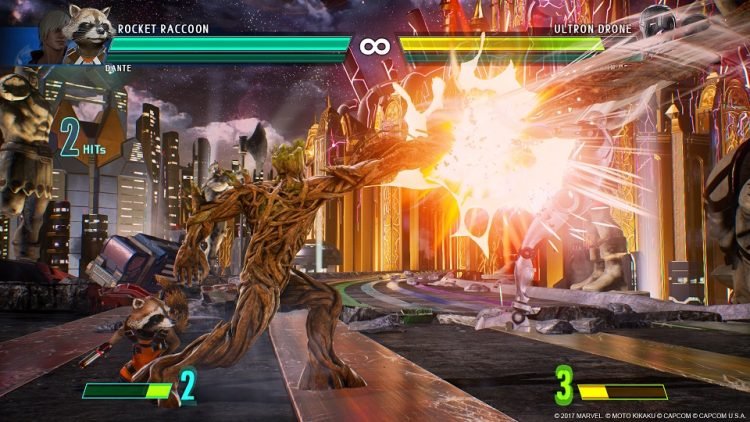 Gameplay in Marvel vs Capcom Infinite is pretty much like every other game in the series. Mash away at buttons and you might pull off something flash and interesting; hell they turned one button into an auto combo button to make you feel awesome. Otherwise, you have the usual array of quarter and half circle inputs with a light/heavy punch or kick to pull off the special moves and a combination of the light/heavy buttons to pull off the flashy super moves… Which the computer always blocks even on the lowest difficulty settings. As for the characters… Character balance… what’s that? This game is all over the place with people finding and exploiting every documented and undocumented frame in the game. Playing online at this point is shit since you’ll find the Spider-Man Web Ball & Reality Stone combo on every team and once you are hit with it, it’s game over. But at the end, it’s all the same shit we’ve seen before. Even the Infinity Stones, which give different boosts and powers, are enough to make this game interesting. 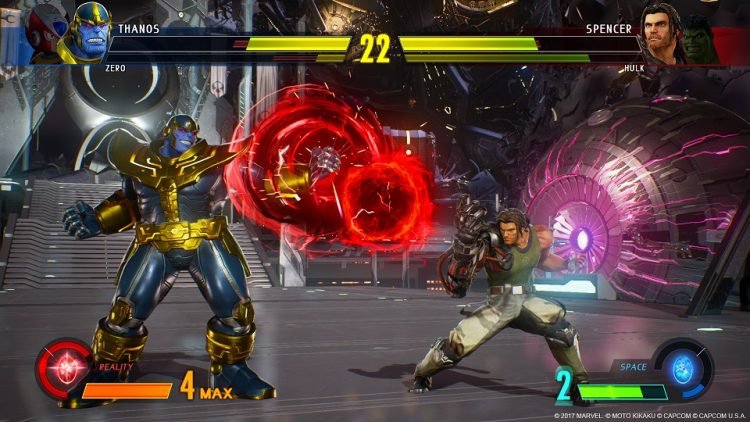 Graphically, Marvel vs Capcom Infinite is very shiny… And that’s it. While Ultimate Marvel vs Capcom 3 had a good mix of a comic book and cartoon style to its characters and backgrounds, Marvel vs Capcom Infinite opts for a more realistic style approach, looking like some of the more modern video games. I’m sorry, but everything just comes off as a bunch of sub-par action figures with a high gloss coating to them. The backgrounds are also subject to the same coat of gloss that the characters have; leaving all of the background stages, some of which are pretty creative cross-overs of stages from places like Mega Man’s city stage and Asgard, New York and Mad Gear City, and many others as nothing more than shiny metallic streets and other robotic looking “buildings”. The highlight here are the effects of the Infinity Stones. The world goes into a single color background style of the area while the animations play out. For example, the space stone activates a trapping field of electricity that looks cool. However, the same can’t be said for the story cutscene animations. The story snippets just look like an afterthought, with characters looking way out of proportion and the way they move looking nothing like they should. Again, there seems to be some care given to some parts of the game, but others just end up looking like a mess. 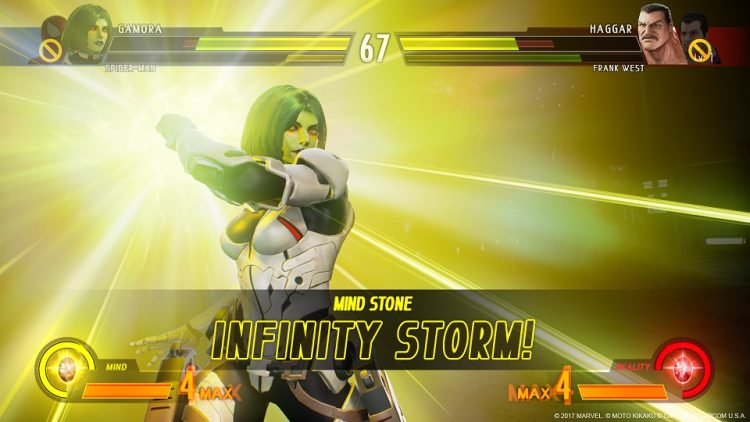 The sound is just as standard as ever. The music tracks pump with adrenaline to help to smash face, the hit sounds are somewhat realistic with proper clangs of metal when needed. Beam sounds and other non-natural sounds are cartoonish as they need to be. The best point here is the voice acting, with quite a few of the characters sounding like their movie counterparts which is pretty cool. The Capcom characters, on the other hand, seem like they have just been thrown to whoever could use the money. The levels of care in Marvel vs Capcom Infinite range from good when dealing with Marvel to absolutely crap when dealing with their own brands… Seriously, why is Ashley Burch playing Chun-Li? Capcom has done so many other games with much better voice actors. (And ones who don’t cross picket lines when they are hard up for a few bucks.)

Related:  'Free Guy' Trailer Will Make You Feel for an NPC 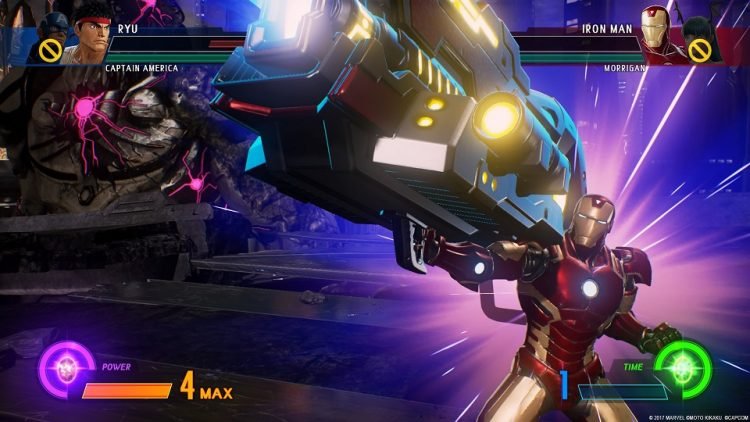 In closing, Marvel vs Capcom Infinite seems like something that should work, but at the end of the day what we got was something that feels halfway baked and rushed to meet a badly decided deadline. The lack of X-Men characters and “The Mouse” having so much control over the use of Marvel characters have gimped what could have been an interesting roster, leaving nothing more than a movie universe advertisement in its wake. Marvel vs Capcom Infinite tried to be something that it’s not, and that’s a good competitive fighting game that appeals to both the newcomers and veterans alike. Plus having an expensive character DLC pass hurts the game more than it should. Capcom needs to stop doing this practice before it has more games underperform… oh wait, they have done this… twice! No wonder Dragon Ball FighterZ has taken over as the must-have fighting game of 2017-2018.

Review Disclosure Statement: Marvel vs Capcom: Infinite was provided to us by Reboot PR on behalf of Capcom for review purposes. For more information on how we review video games and other media/technology, please go review our Review Guideline/Scoring Policy for more info.

A very flawed attempt of a return to greatness

Marvel vs Capcom Infinite tried so hard to be Marvel vs Capcom 2, one of the best entries into the franchise, but ends up falling short in terms of roster, character depth, and gameplay. A lot of interference by Marvel’s overlord: The Mouse; leading to a lot of fan favorites and X-Men characters being left out of the lineup. The story, for what it is, isn’t anything near the depth and interest that other games like Tekken 7 and Injustice 2 have done this year.

Capcom was once the innovator and leading name in fighting games. While the Fighting Game Community might get some mileage out of the title, the casual player has already moved onto the game that does the Marvel vs Capcom formula right: Dragon Ball FighterZ