Nintendo’s newest IP, ARMS, has everything a potential franchise needs to become successful. It’s built around a fun concept, has vibrant characters, and features accessible yet deep gameplay mechanics. Still, this fighter has a few critical weaknesses that prevent the first go-around from being a knockout. At its core, ARMS is a lot of fun and a very enjoyable game, but I can’t help but feel it could have reached even greater heights.

ARMS shines brightest when two players go head-to-head in one-vs-one action. Players choose one of 10 colorful characters (with more coming as free DLC), each with three unique extendable ARMS and a personal ability. “The Air-ess” Ribbon Girl can jump multiple times in the air, “The Scrapyard Scrapper” Mechanica doesn’t flinch when punched and can glide, and “The Student of Stealth” Ninjara can disappear while guarding or dashing to surprise foes. Every character feels unique, and all of them have distinct personalities that exude from their every expression. 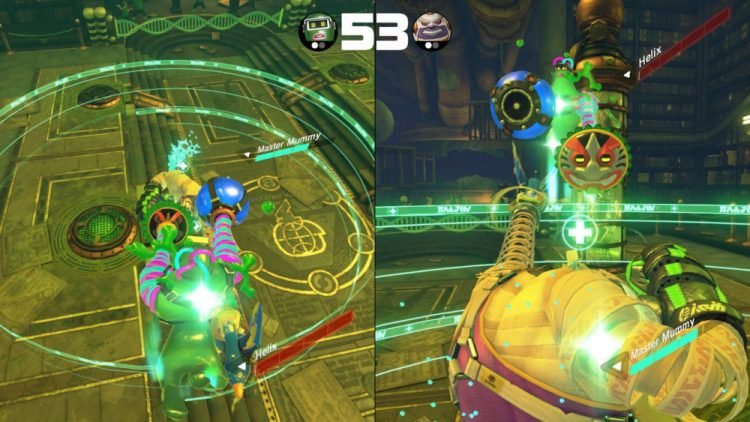 Helix can plunge low to the ground when dashing to avoid punches, and stretch tall to escape punches that would otherwise hit!

Customizing those great characters with ARMS that best suit their abilities adds a layer of strategy to the game as well. When you first start, every fighter will be locked to just three ARMS, but by earning coins you can play a mini-game and punch targets to earn more. I found myself gravitating towards the character’s original weapons, but it was nice to be able to swap Master Mummy’s Phoenix in favor of Kid Cobra’s Slamamander. 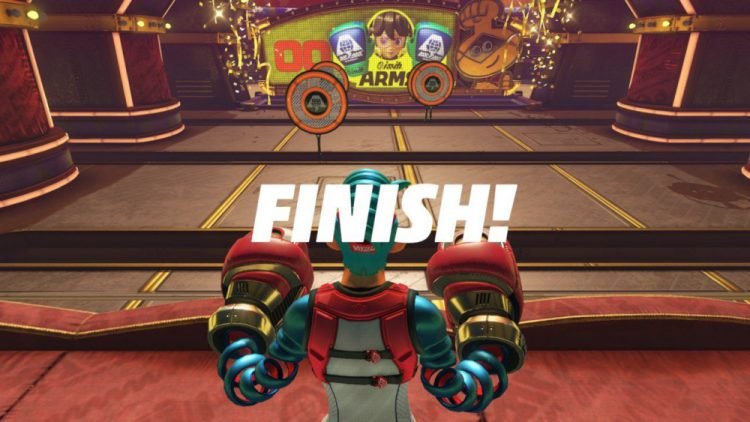 The ARMS you unlock are random, but it seems like the character you bring into the target test gets the most new gloves.

Once you’ve selected your ARMS, the match beings and you’re free to start throwing punches either by actually punching with the Joy-Cons or by using the triggers or A and B buttons on the Pro Controller. Personally, I enjoy the motion controls, but both options have their drawbacks. It can be difficult to move precisely with the motion controls. You have to tilt both Joy-Cons in the same direction to move, and when you’re focused on throwing and hooking punches it can be tough to keep everything in order. The Pro-Controller makes moving easy, but unless I’m mistaken you can’t twist two ARMS at once. If you can, it’s definitely way more complicated than it needs to be. At the end of the day, I just flat out had more fun actually throwing my punches. It felt like the authentic experience the developers aimed to achieve.

Earning victory in the ring requires quick reaction time, good strategy, and an overall feel for the flow of the fight. Playing Ranked matches is as exhilarating as it is addicting. Like any fighting game should, every opponent feels like a new challenge with new lessons to learn in both victory and defeat. Knowing when to punch, how to condition your opponent, and when to unleash your rush attack is vital to finding success against your rivals. The above video does a great job of showing the depth of the game. Watching Mr. Yabuki play opened my eyes to just how much depth there is behind the game’s relatively simple mechanics. 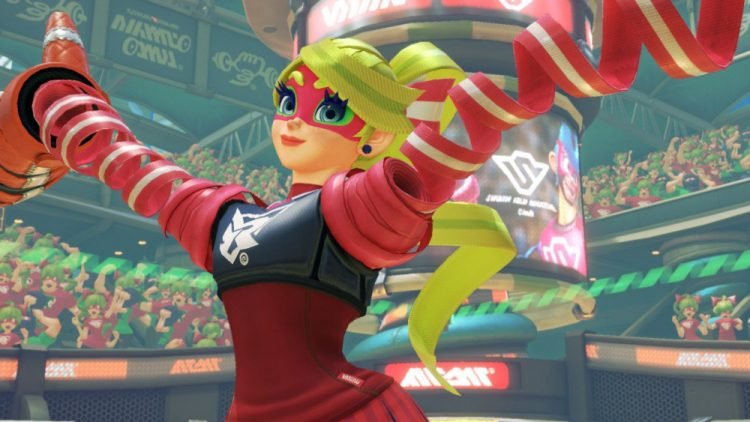 The online connection works shockingly well. Mario Kart 8 Deluxe really gives me trouble online, but ARMS rarely had a hiccup. There’s definitely the occasional lag, but it only made the difference in one of my many battles. Still, there’s more to ARMS than Ranked Matches, and that’s where the game begins to fall short.

By far the biggest weakness in ARMS are the fairly terrible mini-games you’ll be forced to endure. The first, V-Ball, could have been a lot of fun if it was designed better. You (and a teammate in doubles) play volleyball with a bomb filled ball that explodes after a bit of time or when it touches the ground. The idea is a natural fit for ARMS, but without any way to add power to your shot the game just devolves into a game of waiting for the ball to explode on its own. Characters with lighter ARMS, like Ribbon Girl, are at a severe disadvantage because they just don’t have the power to hit the ball hard enough to score in a traditional way. 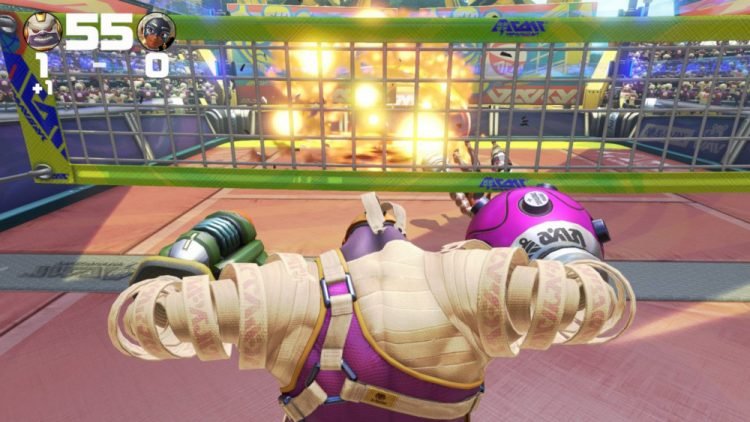 Next, and by far the worst, is Skill Shot. Much like V-Ball, characters without the right preset equipment find themselves at a severe disadvantage. The goal is to hit more targets than your opponent, with each punch scoring bonus points if it hits extra targets or your opponent standing across from you. If you have an ARM like the Tri-Bolt, which shoots three shots in one, you’ll be able to hit so many more targets than someone stuck with traditional gloves. There’s absolutely no joy to be found here.

Hoops actually has some fun to offer, but again character’s equipment (which cannot be changed before the game begins) goes way too far in determining the outcome. Two characters face off on half of a basketball court without a ball, their objective being to dunk each other into the hoop. Grabs are the only way to score (aside from rush attacks), and that does add a layer of difficulty that keeps things fun. Still, two key flaws hold this game back. First, if you get the grab, there’s a chance that your character will still miss their shot. During one particularly frustrating game, I grabbed my opponent seven times and they grabbed me four, but I lost because Twintelle kept missing her shot. Second, characters with electric or ice ARMS have a clear advantage, as hitting with normal punches lets them get a grab for free.

All of these modes add nothing to the ARMS experience, but with a few minor design changes, they could have been great. It’s a huge missed opportunity, and they’re really the only bonus content supplementing the main game.

Still, the moment ARMS boots up, charm bursts from the screen. The game’s theme song strikes a great balance between fun and competition, fitting right in with what’s to come. Unfortunately, there aren’t many game modes. Grand Prix (1-2 players), Versus (1-4), Party Mode, Ranked Battle, Friends, and Local are your only options, and they all offer a similar experience. It would have been really nice to at least get some sort of extra mode like Mortal Kombat’s Kyrpt that went further into the world of ARMS’s lore.

Grand Prix serves as the classic arcade mode. You’ll take control of any fighter and battle through 10 fights before taking on Max Brass. Mixed in with your standard fights are two of those dreadful mini-games, so even if you wanted to you can’t ignore them. The AI may make you want to pull your hair out as well, although generally, the mode is fun and a good way to learn how to play. I’m curious if others will experience the same thing, but I felt the computer was way more competent with some characters than others. Fighting AI Ribbon Girl and Byte and Barq always was infinitely more challenging than any other opponent. That could just be the result of my fighting style, but they consistently stymied me at the higher difficulties. 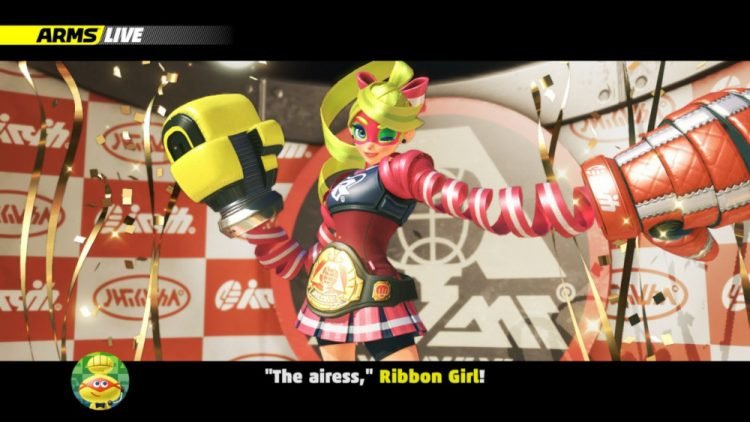 The one true champion

Winning the championship earns you the belt, and if you were playing on level 4 or higher you’ll unlock Ranked mode for online play. There are no character endings outside of a thank you screen, which is a huge shame. The characters are easily one of ARMS’s biggest highlights, and seeing Ribbon Girl perform her concert or learning more about what goes on in Helix’s head in little cutscenes would have been great. 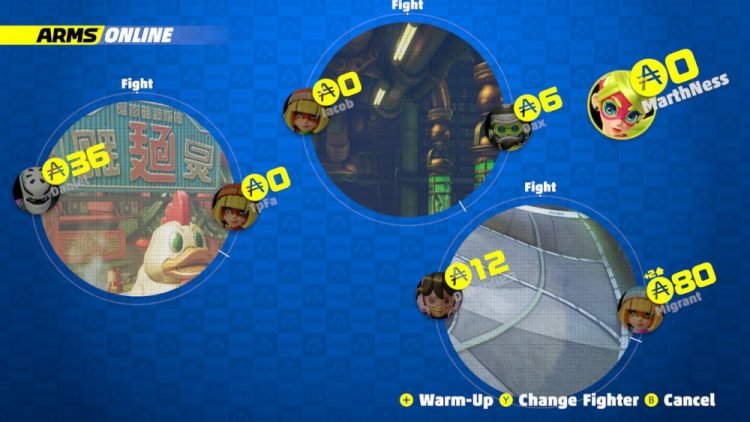 You could definitely get caught up in and endless cycle of “just one more game!” in party mode.

Party Mode turns up the fun from medium to high, and it’s the best way to earn coins which you can then use to unlock new ARMS. You’ll enter a lobby of up to 10 players and the game will put you into all sorts of different modes. There are boss battles against Hedlok that have you working with two allies, free-for-alls, 2 v 2 battles, those dreadful minigames, and 1 v 1 duels. Most of the time you’ll play 1 v 1, and the other games mix up the rhythm nicely.

The 2 v 2 battles and free-for-alls have a lot to offer. I’m especially fond of the former because there’s a lot of strategy and teamwork to be found beneath the chaos. The free-for-alls often leave you being either targeted or completely forgotten about, but I still liked them a lot.

I’m torn on the final mechanic of Party mode, however. If you go on a winning streak, the game starts slashing your life away. You’ll start with significantly less health than your opponent, but winning rewards you with additional coins. I’m cool with the idea, but it’s frustrating that you can’t turn that off. I’m pretty solid at ARMS, so I often found myself with a winning streak, only to face an equal opponent who would steal a victory because of my handicap. Losing repeatedly gives you a free rush attack to open the battle, and again I feel players should be able to accept or deny that charity. The idea is actually pretty neat, but I’m not crazy about the execution.

ARMS‘s final issue has to do with the amount of content in the overall package. ARMS really needed a story mode like Injustice and Mortal Kombat that gave us a look into its vibrant world. The characters don’t speak outside of a few one-off lines after a battle, but they all seem so carefully designed and have an incredible personality. A story that explains how the ARMS League came to be and showed the characters interacting would have been great. There are tons of hints about the world hidden for players to discover, but a full blown story would have added some much-needed meat on the bones. 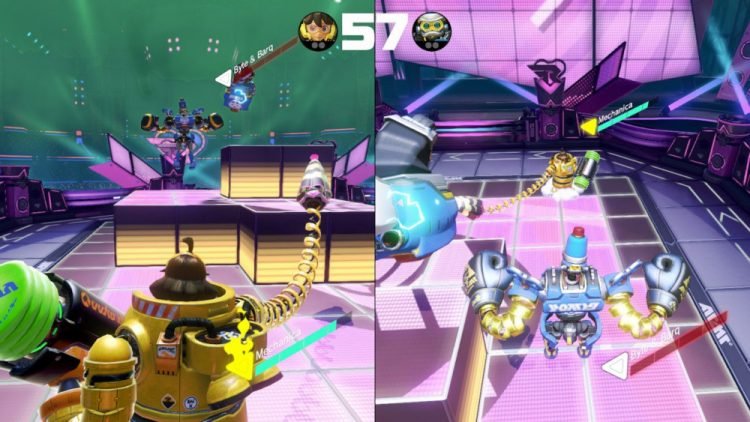 And yet, after all those complaints, I can’t help but gush when I talk about ARMS. The fighting mechanics, the main staple of the game, are too much good to score this game any lower than a four out of five. Hopping online, or playing locally with friends, always leads to a good time. At the games, roots lies an excellent concept, and Party and Ranked mode fully deliver on that promise.

Those searching for a high energy fighter to enjoy with friends or against foes around the world will get a lot of joy from ARMS. If you were planning on getting this game for its single-player content, however, stay away. 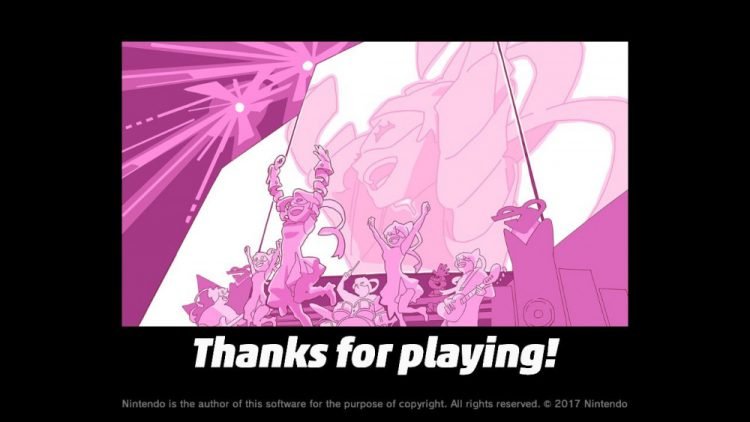 Although ARMS may not be perfect, it’s a really good time playing both online and locally with friends. Its single player offerings are underwhelming, and more story content to experience and the removal or refinement of the three bland mini-games would have pushed ARMS to near perfection.