It must be nearing the magical time in September when the regular NFL season kicks off and the country (and some people outside of the USA) begin to don team jerseys and yell at the TV screen. This is Football season, which I guess you could say begins in August when EA Sports releases their yearly update to the 25+-year-old franchise of Madden NFL with the aptly titled Madden NFL 17 . Last year EA Tiburon focused on getting passing and defense into more technical yet newbie friendly controls and mechanics; so what do they have in store this year? Let’s take a look. 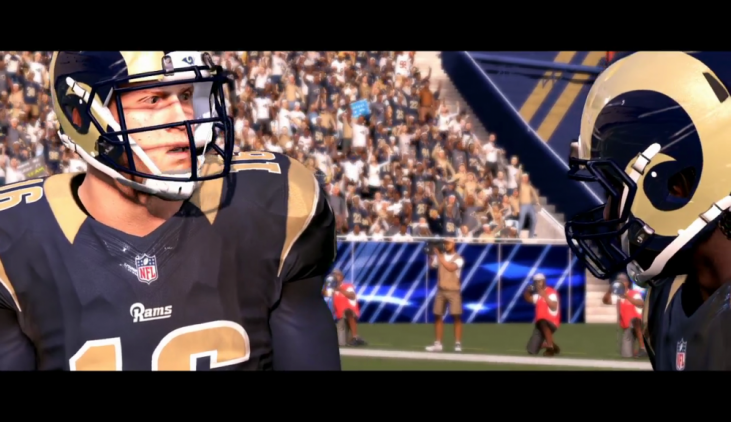 Now the biggest updates to the game itself is in the gameplay mechanics, which I’ll cover later. What has remained untouched are the modes in which you are introduced and expected to play through for the next 12 months. Leaping off from the Steelers/Cardinals matchup to introduce you to the new gameplay mechanics, Madden NFL 17 begins with a matchup between the Rams and Redskins with the Rams down by a touchdown and through the use of cinematic sequences and actual gameplay, have you leading the Rams to victory… Or in my case, a loss due to an interception at the Goal line.

Once in the game proper, you are greeted with all the usual options in which to play Madden NFL 17 . The main three modes are here once again: Madden Ultimate Teams, a mode in which you use randomly drafted cards to build your Ultimate team and play through a bunch of challenges or online matches. Once again this mode is the one in which EA Sports is hoping that you’ll spend actual money for points that can be traded for more and more packs of cards or special packs that are available for a limited time. The other mode similar to this is the Draft Champions mode, which is more akin to your fantasy drafting game that you would play online with friends. The final main mode, Franchise mode, is the core mode where you can play as a Coach, Player or Owner and make decisions that will lead your team to victory and hopefully a Super Bowl ring.

Personally, I like to play Franchise mode out of all these three, and as a player, because I’d love to play an actual Football game one day… And also the number 24 is open for use since Marshawn Lynch is now retired. Rest Well Beast Mode. An added bonus to Franchise mode this year is the ‘Play The Moment’ time feature. This new addition breaks the game down to just Red Zone and other special moments in the game before you have a need to step in and actually play, leading to a faster and more exciting gameplay experience. 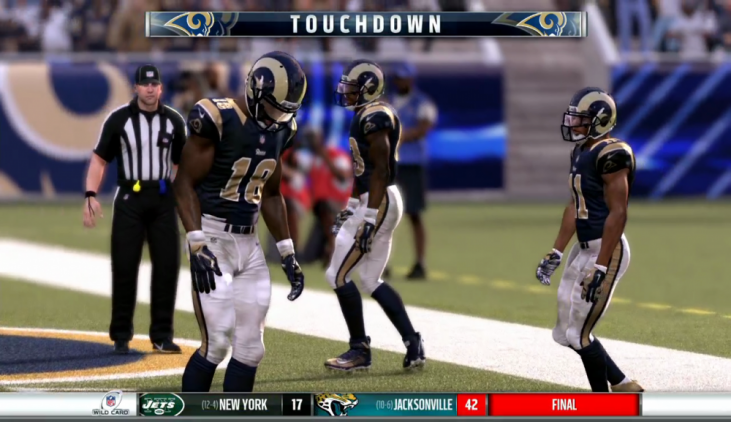 There’s nothing that can be said about Madden NFL 17 ‘s graphics that hasn’t been said before. The characters are great and look full of personality, even if they still drop like a bunch of rag dolls upon contact with each other. During the small scenes between plays, everything looks so good that it looks like it’s come right from an NFL broadcast. Hell, the grass on the field is so well done that you can see each blade of grass being trampled underfoot as the football spirals through the air glistening off the sunlight as it travels from Quarterback to receiver.

The only real drawback is that the crowd still looks and feels like a bunch of low-resolution cutouts with two frames of animation. Surely in this day and age of insanely complex graphics processors, we could have a full crowd that moves and acts like a bunch of people instead of pre-programmed puppets.

The on-screen displays for things like which button will throw to which receiver, the newly added run direction arrows, and other prompts are not that out of place that it draws away from the game, in fact, they work so well into the gameplay and on-screen presentation that I miss seeing them when I watch an actual NFL game during the year. 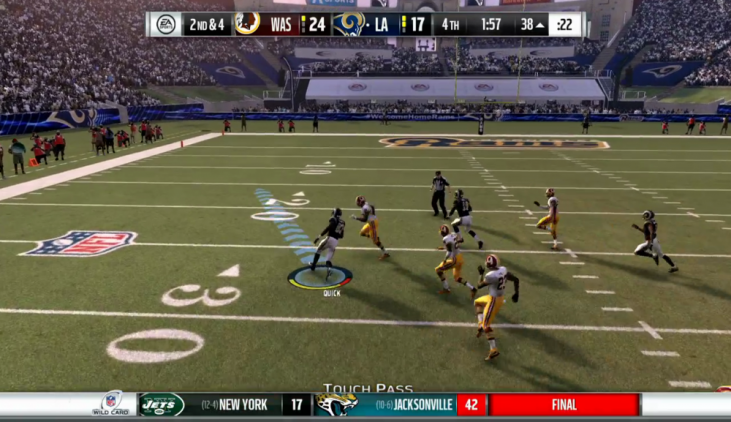 Madden NFL 17 ‘s sound design is as crisp and clear as ever. You can hear every impact of body on body as defenders rip into the offense. Every grunt from a Quarterback throwing the ball harder and further than he intended is amazing. To add to the excitement of the game, the commentary is right on point with every play that you do. To add a bonus into the mix, the game will be constantly updating and adding to the commentary as the year progresses, leading to a more real conversational nature of commentary rather than the robotic repeats that we are used to. Frankly, after hearing this for a few games, I pray that other sports games take notice of this bonus and include it in their games. Madden NFL 17 is a trendsetter in something that is sorely needed in the sports game genre for years. 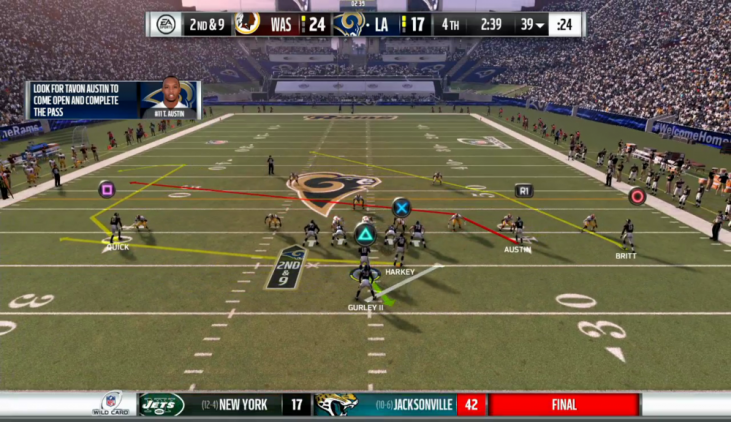 EA Sports has focused on improving a few things in Madden NFL 17 . They have focused on a more Enhanced Ground Game, meaning that they are given the player more options when it comes to the running game. The addition of a directional arrow to show where you are headed helps you move around defenders better than the blind leading the blind method in previous games. You also have a button struggle mini game to help you get through defenders if they give you a light enough tackle, and finally, they have refined the sudden movement system to the right stick to make juking and jiving a lot better and smoother.

The next big improvement in Madden NFL 17 is new Zone Defense system. This is more of an expansion of the Zone Defense from the 4 zone types to 13 expanded types. This expands the defensive options for those people who love to have more options to smash their opponents on their drive to the end zone.

The final improvement is to the Special Teams. Instead of the old right stick flick method of kicking the ball, you now have a three button set up. One press begins the turn upwards, the second sets the power of the kick and the third sets the accuracy. Your left stick now controls the aim of the kick and must be held in place while kicking the ball at all times, which is a pain in the ass for someone like me who has sudden ticks in his hands from years of speed tying nerve damage. Otherwise, it’s a welcome change that gives the kicking game a bit more of a randomness than the previous version did.

These new improvements in Madden NFL 17 have made the game a lot closer to a perfect simulation that it was intended to be since it began. 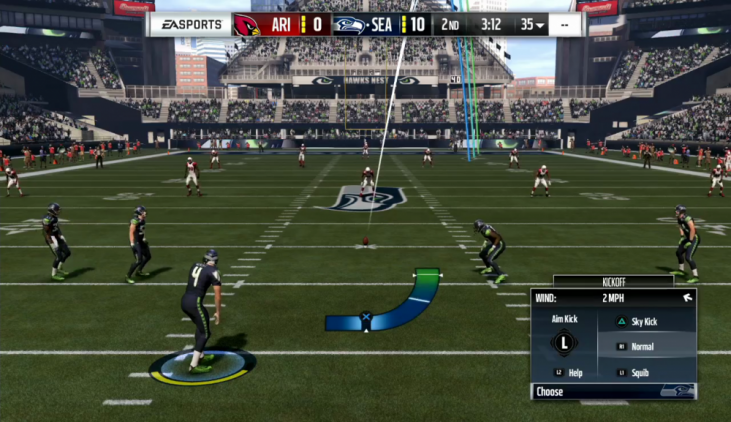 Madden NFL 17 is as close to a perfect simulation game as you can get. While 2K has stripped the title from EA when it comes to the NBA games, there is no company on the planet that I would rather have handling my NFL Football games than EA. While there are no new game modes this time around which might keep people from playing Madden NFL 17 , the changes in gameplay are worth the purchase price. Honestly, after playing this year’s game, I’m not sure how much more EA can do before they break something that didn’t need to be fixed.

*This game was provided to The Outerhaven Productions for review purposes. You can find additional information about our review policy here.

Madden NFL 17 is the perfect blend of technical yet accessible game play that a game like this needs. It’s technical enough to keep the die hard players satisfied, yet keeps those same mechanics simple for newer or not so advanced players coming back for more. While I’d still keep away from the random online match ups in things like Madden Ultimate Teams due to that being fore the more hardcore crowd, I’d happily give playing the Franchise mode a go with my friends once again.