Elgato is usually a name that most gamers are familiar with when it comes to gaming capture devices. The company has released many devices that have allowed gamers and content creators to capture their best gaming moments. Not too long ago, Elgato released a portable 4K capture device that could be a game-changer for streamers, both new and old, but is it really the game-changer that it claims to be, or is it just another device to sit on the shelf?

I purchased the Elgato Game Capture 4K60 S+ capture device to see if it could take full advantage of the PlayStation 5 and Xbox Series X consoles, which I am lucky enough to have in my office time. While I already have access to an internal capture card capable of capturing 4K, having access to the same amount of power in a portable device is handy. I tend to move my consoles throughout my home as I’m constantly looking to optimize my office space. I also like to have something available when attending conventions like PAX and E3, where I tend to get access to games directly from the booth or through private viewings. With the Elgato Game Capture 4K60 S+, I can do all of that now with 4K support. 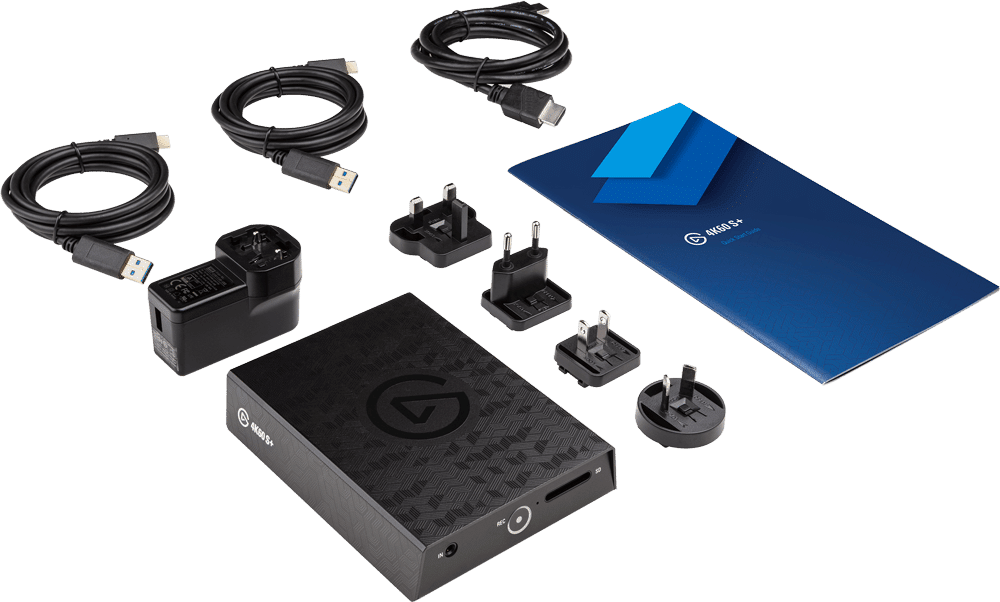 Similar to other Elgato recording devices, everything you need to get started is included inside the box. Inside the packaging, you’ll find the Elgato Game Capture 4K60 S+ capture device, 2x USB  Type C cables, an HDMI 2.0 cable, a power supply with multiple swappable heads so it can be used in various regions and an instruction manual.

Surrounding the device’s top and sides is a very slick futuristic design featuring a slightly raised surface. The record button is accompanied by the SD card slot and a 3.5mm jack for adding an audio input to the front. The device’s back features an HDMI input and output port and 2x USB Type C ports, one for power and the other to connect the Elgato Game Capture 4K60 S+ to a PC. At the bottom of the device is a vented plate, which allows the device’s heat to vent out. And believe me when I say that the Elgato Game Capture 4K60 S+ gets plenty hot when recording – especially recording a 4K60 HDR signal.

The Elgato Game Capture 4K60 S+ also supports zero-latency delay, so when you plug in a gaming console/PC or another HDMI input, you’ll experience no latency.

The beauty of the Elgato Game Capture 4K60 S+ is that it can be used with or without a PC. All you need to do is insert a formatted SD card into the slot located at the Elgato Game Capture 4K60 S+ front to get started in the standalone mode. After a few seconds, the device will write a configuration file onto the SD card (more on that later), and it’s ready to rock. When the middle of the button is solid red, it’s ready to record. Pressing the button, the circle’s outer edge is flashing red, which means it is now recording. When finished, pressing the button again will cause the smaller circle to flash rapidly, indicating that it is currently saving your footage to the SD card.

When you’re connected to a PC via a USB Type C cable, you don’t even need to bother with the physical button as you’ll be able to use Elgato’s recording solution, OBS, Stream OBS, XSplit, or whichever capture and streaming software you utilize. However, when you are connected to a PC, you will then need to make sure that your PC meets the requirements, which you can see below.

Sadly, as pointed out by the requirements, if you use AMD’s Radeon GPUs, you won’t be able to use the Elgato Game Capture 4K60 S+ with your PC. Nor will you be able to do so if your processor isn’t up to the task. Definitely pay attention to the requirements before deciding to pick this up.

You’re looking at one of the most versatile and powerful capture solutions around, and it’s completely portable to boot. The Elgato Game Capture 4K60 S+ is a damned interesting capture solution. Mainly as it is the only portable device capable of recording up to 4K, 60 frames per second that can also capture HDR (HDR 10) content, this makes it the perfect companion for both the PlayStation 5 and Xbox Series X, as power next-gen consoles will continue to push HDR in upcoming games. This easily makes the most capable capture device if you’re looking to get the best-looking encodes from either console.

You’ll get quality video encodes from the Elgato Game Capture 4K60 S+  as well, thanks to the onboard video encoder. To best the absolute best from the device, you’re going to need an SD card that can handle the high bitrate. I’d recommend one that is rated at that supports V30 or UHS-3. Attempting to use a lower-end SD card will result in frustration, and your recorded footage will full of shudders if it even records.

It’s time to address the elephant in the room; 1440p. The Elgato Game Capture 4K60 S+ does not support this resolution, well, not completely. The device can take a 1440p signal but will only record up to 1080p and 4K; it will not record at 1440p. It’s a compromise, for sure, but it’s better than nothing.

The Elgato Game Capture 4K60 S+ doesn’t keep track of dates when you record content. Using the device without connecting it to a PC will record using the same date. Some random rate that you can’t set is annoying, and when you take the SD card out and plug it into an SD card reader, the dates will all look similar. The only way to pick out what media is newer versus the older media is by looking at the timestamps. This has been brought up to Elgato, and they said they were working on a solution to this, yet we’re nearly a year in, and nothing has been done as of yet.

While you can change between recording between 1080p and 4K, it’s a bit difficult to do so. To record at either resolution, you’ll need first to take an SD card and format it so that the capture device can read the card. You then have to insert the SD card into the 4K60+ to populate the card with the proper folders and a config file. Afterward, you’ll have to take the SD card and plug it back into your PC to update the config file. From there, you can change between 1080p and 4K,  encoder selection and HDR signal, video format type (MP4/MKV), recording bitrate, and which input the device pulls audio from. All of which is done via a text file! Again, this is frustrating for advanced users, and I’m not a fan of how unfriendly this process is. This is something that Elgato needs to address either through updates or a hardware revision.

Then there’s the problem with Elgato’s 4K Capture Utility software, which still has the same issues as when we first reviewed the 4K60 capture card. The application becomes unresponsive when retrieving recorded videos from the Elgato Game Capture 4K60 S+ when connected to a PC. In this regard, I resorted to using an SD card reader. You also can’t use the superior Elgato Capture software to make things worse, as it’s not compatible. Thankfully, OBS, StreamLabs OBS, and XSplit work, yet not being able to use Elgato’s own software is puzzling. Hopefully, this gets addressed.

Lastly, the 4K60 does not support Instant Gameview, which is frustrating. Up until now, every Elgato capture device since the HD60 has supported this feature, which provides a low-latency preview of what you’re capturing on a second display. According to Elgato, with the Elgato Game Capture 4K60 S+, there’s a noticeable delay between 200-250ms. It doesn’t affect you if you’re using the device for recording purposes. However, when live streaming, you’ll have to adjust to compensate for the delay.

There’s no denying that the Elgato Game Capture 4K60 S+ is a fantastic gaming capture card for both gamers and content creators. However, it’s also not exactly clear who this device is for. Sure, it can do 4K60, but we’re still not at the point where 4K is the only resolution that most care about. The price of $399.99, which is more expensive than all of Elgato’s existing capture devices or its competitors, could also be something people would shy away from when looking at capture card devices.

My final thoughts are this: If you can afford the Elgato Game Capture 4K60 S+, you won’t be disappointed. Especially if you own either the PS5 or Xbox Series X, you’ll love it. Outside of that, I don’t believe the market is ready for this high level of a capture card device. If you can utilize it, Elgato’s 4K60Pro Mk2 is the better option at this time.

While the 4K60 S+ has a loaded feature set, it misses a few marks, and the high entry price point may put people off.