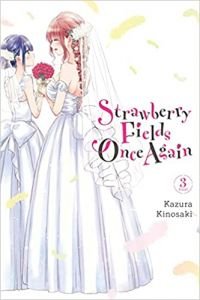 Here we are at the final volume of Strawberry Fields Once Again! A lot of things happen in this volume that is a bit hard to follow but by the end of it, you get a sense of what took place.

We find out that Ruri’s plan was to build a time machine after learning about his Master, Sumire Tokioka’s, ability to travel back through time. As a side note, how ironic her last name starts with Toki which means Time in Japanese?

When he completes the time machine, Sumire says that her power had vanished. She had been struck by lightning when she was younger and started to experience headaches. Whenever she had a headache and thought about a specific moment from the past, she could travel there. Ruri entrusts this time machine to Sumire by asking her to do him a favor. She wants Sumire to go back in time and kill Ruri and Akira’s parents… that way neither one of them would exist. Sumire puts on the helmet and time leaps; however, she can’t bring herself to do as Ruri asks.

In the last volume, Pure also went back in time once again and she has been searching for Akira for over a year. Ruri, fully aware of this, has been paying the private detective that Pure hired to feed her false information. Sumire, now back in the past, tracks down Pure and tells her everything. Plus, she gave her Akira’s address.

Pure heads off to find Akira when she runs into her at a broken-down building. A steel beam is about to fell when Pure pushes her out of the way and gets injured in the process. As she’s being wheeled down a hospital hallway, we jump into the future.

Here, the roles are reversed. Pure and Akira never met; however, Akira was the one injured by the steel beam. She had become a teacher but decided she was going to quit because the pain medications were no longer helping her cope with her injuries. This was a bit confusing as it seemed as if this was what ended up happening but, instead, they were just giving us a look into a future that was being changed by Pure’s actions.

Back in the redone present, Pure wakes up. Akira is at the hospital to be by Pure’s side. Since Pure went back in time, memories of her were semi-wiped from Akira’s mind. All she had were recurring dreams of Pure but she could never remember who she was until the two of them met. Ruri visits them at the hospital and discovers that Sumire left behind a social media tag from their mother, leaving them a final message before she passed away. After reading it, Ruri gives up on his plan and apologizes to Akira for everything.

We then are taken seven years into the future where we get the ending to the series.

I left a bunch of the details out because there’s some nice backstory in there about Akira and Ruri’s parents, the role Sumire played in their history (or histories in this case), and more. It was a lot of information to take in but it made a lot of sense once everything was all said and done.

Overall, I wasn’t sure if I was going to like this series. The first volume was really iffy when it came to the plot. Pure was really overbearing and annoying while Akira was just too precious for words… even in her dark and emotionless state. By the time we got through with the second volume, things took a huge turn and became extremely interesting. This went from about a 5 on a 1-10 scale to about an 8 just like that.

With the final volume, things were a bit contrived and a little confusing. Even with this being a short series, I felt that it could have benefitted from a fourth volume to really take the time to flesh things out and explain things. I really felt that the final volume was a bit rushed which is why things didn’t seem to add up from page to page at times. Of course, it does pull everything together and you do understand it all but it went by way too quickly.

If you are looking for a quick read with an enjoyable yuri romance with a lot of sci-fi and time travel mixed in, this should be an instant grab. It was a pretty decent series and that that I wished it had more shows the potential it could have had if the story were stretched out and slowed down a bit. Otherwise, it’s still a great read and you should check this one out!