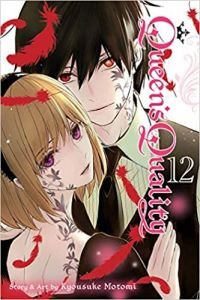 Volume 12 of Queen’s Quality shows the aftermath of Kyutaro’s battle with his snake. He gave the snake his wish that he wanted to remain himself; however, the snake began to break his mind, telling him that his wish wasn’t good enough and that he would make another and another until he ate all of his wishes, leaving Kyutaro as an empty husk; however, in the heat of the moment, Fumi steps in as The White Queen and forms a pact (or sacrifice) with Kyutaro and it allows him to turn the tables on the snake. He makes a deal saying that the snake is no different, wishing to get his true self back. They end up forming a pact that allows both Kyutaro and the snake to use the power of the queen while they each fulfill their own wish.

Just as soon as that ends, the Genbu are alerted to a dire emergency and have been summoned to the Seiryu headquarters. There, they meet with Ranmaru but before they can carry out an operation, they are forcefully pulled into Aoi’s mind vault. Here, the battle to save Aoi and defeat his snake begins!

Yes, that is a bit of a short summary but the entire back half of the volume consists of the fight against the snake and figuring out a way to save Aoi without killing him in order to kill his snake. It’s a bit of a puzzle but, apparently, they may have found a way to accomplish it. The results of their theory will not be on display until the next volume. The volume does end with snake vs snake being teased so we’re sure to get a nice start to Vol. 13!

Honestly? There wasn’t much development with our main characters. Fumi is becoming more and more confident in her queen powers and that is leading her to taking a more commanding role while Kyutaro is kind of back peddling. He started off in QQ Sweeper as a really strong-minded and strict individual but now, he’s really degenerating into more of a character who can be broken easily. We’ve seen him in quite a few situations where he was on the verge of breaking and while, yes, he did overcome these situations, he never did so alone. It’s odd to see these two characters slowly reversing roles but it is, at least, adding new layers to them which is always nice.

Outside of that, we did get some nice backstory between Aoi and Ishiki and the significance between the two of them. The snakes themselves are a bit different where Aoi’s is more heartless and ruthless but Kyutaro’s is more… persuasive. Or, at the very least, it can be forced to be swayed in another direction. No wonder Aoi’s snake sees Kyutaro’s as weak!

Also, can we give a Boy’s Scout badge to Ranmaru? He’s definitely earned it after this volume!

This was a bit of a slower volume that felt like any and all evil entities were standing around spouting forth their evil claims while all of our main characters boasted about how they won’t get away with it. Just classic good vs evil rhetoric and while the action was kept to a minimum, the development of the story ramped up and that’s what held your attention from beginning to end.

If the job of this volume was to set up a big conflict, then it did its job perfectly. It established where the battle lines were drawn and all that is left is to fight along those lines. Next volume promises to be action-packed even though it’s a bit predictable that Aoi will be saved. What happens to his snake afterward, though, is going to be the truly interesting part. Plus, this whole pact/sacrifice between Kyutaro, his snake, and Fumi is also pretty interesting. Makes me wonder if there is a way to turn Kyutaro’s snake to the side of good permanently?

There’s also the bit surrounding The White Queen who simply acknowledges that Fumi made her decision. All of these Queens just popping in and out, talking about decisions, then disappearing is getting a bit old, though. Is Fumi black? Gray? White? What is she? How many queens is she going to get power from? It is a little convoluted but there have been times where it has been that way in this series and things just end up getting straightened out. Hopefully, they can focus on the queens themselves and end all of this monotony once and for all.

Until then, we can just prepare ourselves for a snake vs snake battle in the next volume!