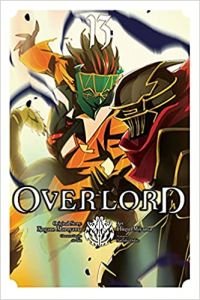 Volume thirteen of Overlord is divided into two major sections: the truth behind Demiurge’s plan and the aftermath of it… plus some bathing.

Ainz goes to meet Demiurge to discuss the reasoning behind his demon attack on the kingdom. Demiurge then breaks down his reasoning into four main benefits for Ainz and the Tomb of Nazarick. After discussing the reasons behind the plan, Ainz agrees with it and has Demiurge rough up his armor to make it seem as if the two of them did battle with one another. They break out of the room they were talking in and put on a little public display before Demiurge as Jaldabaoth takes his leave.

Climb reports back to Princess Renner who informs him of the fates of some of the evacuees. There is still some definitely foreshadowing here with Renner doing nefarious deeds. What will come of that in the future still has yet to be revealed.

Back at the Tomb, Ainz hands out rewards to Albedo and Solution and then wants Albedo and Demiurge’s advice as to what the Tomb’s next steps should be. Demiurge says the Tomb should focus on Ainz’s plan for world domination but Ainz realizes right then and there that Demiurge misunderstood his true plan of just getting his name around the world in case some of his friends are trapped in the game like him. Still, he feels that they’re in too deep to back down now and agrees. Demiurge says their first step is to expand the Tomb to become its own country.

Related  Rakuten Viki Streaming Service Has Your Next Binge: J-Dramas

Then they all take a hot bath together to end the manga.

The main focus of this volume is on Demiurge. He is proving his intelligence but with the way he’s acting, it seems more and more likely that he has his own personal agenda. In fact, he blatantly came right out and said that he wants to become the King of Demons. During his report to Ainz, he stated that they already have a major foothold in the underworld and that with only a few more moves, they could conquer it completely. Putting those two pieces of information together, it’s clear to see what his ulterior motive is… if he even has one. He could just be doing all of this for Ainz but he’s taking way too many liberties as of late.

Then again, it was Ainz who scolded Demiurge for being way too reserved and that he needed to become this way. Maybe he took that a little too harshly and this is how he’s rebelling? Or… he could just be doing what Ainz said.

Renner is still up to something and that part hasn’t changed but you can see a bit of a change in Climb with each and every volume. There is no telling right now if he actually suspects anything of Renner but he is become more and more deeply devoted to her. Makes you wonder how he’s going to react when he finds out the truth!

Man, it’s been a while since we’ve had the last volume. It was a little over a year ago that volume 12 came out. I was surprised when I went into this blind and remembered everything that happened! Eidetic memories are good for some things, I guess.

This was a nice cooldown volume that explained Demiurge’s plans, explained the aftermath, and set up the next goal and/or story arc in the series. Although, with world domination being the new focus, it makes me wonder how much longer this series is going to go on for? Usually, series such as this has a shelf life of around 20 volumes. That means we’ll have Overlord for quite some time to come if that is the case but it definitely does seem as if we are over the halfway mark.

One thing that was a bit odd is that Ainz, towards the end, began to recount his memories of Japanese culture. For the majority of this series, it doesn’t really remind you that this is an isekai. You’re more ingrained with the lore of the world and the events that are happening that you often forget that Ainz is just a Japanese guy stuck inside of a game world. That little reminder was like an “oh yeah” moment since it’s not really referenced as much as it is in other series. That’s actually a good thing because it’s trying to make you immersed in this fantasy world but, at the same time, a little jolt of the memory is needed as it is the root cause of everything that’s happening!

If you liked this review, consider following me on Twitter @JJPiedraOELN