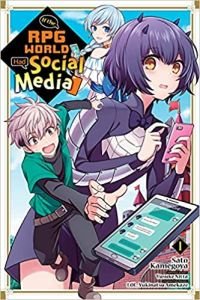 At first, I thought this was an isekai but this turned out to be just a regular fantasy RPG-style story that just so happened to have social media. It follows a 16-year-old boy, simply known as Hero. Hero learns that the princess has been kidnapped by the Demon Lord so he texts the Demon Lord and lets him know that he’s coming to kick his ass.

Except the Demon Lord is a girl… and she’s cute… and sweet… and kind… and captures his heart! He swears to meet up with her but thanks to 108 curses put on him when he was five, he can’t even beat the easiest of monsters. In fact, his HP is permanently set to 1, he can’t gain experience or even level!

Feeling sorry for him, the Demon Lord sends her strongest general, Mako, to aid him. Mako can’t help but speak in cat slang and constantly repeats herself whenever she doesn’t use any slang, fixing the problem. After a while, the second of the four generals, Nicoletta joins then, followed by Pino, and finally Oniko. Hero has quite the entourage with him now as he journeys across the land in order to reach the Demon Lord’s castle!

All the while, the Princess is becoming a love rival for Hero… but not because she likes him, she likes the Demon Lord!

There are quite a few characters here… even for a first volume!

First off, we have Hero. He was cursed with 108 curses at the age of five causing his father to go to the land Down Below to find a cure for them. He finds his mother annoying even though he’s a shut-in that has social anxiety. He can only converse through texts… which is what he does throughout the entire volume on his journey. Outside of this, he’s a bit a half-open, half-closet perv. Sometimes he’s open about it, other times, not so much.

Mako is one of the four demon generals sent by the Demon Lord to help Hero reach her castle. Mako is in the form of a girl but she is actually a tiger. She can’t help be speak in cat sometimes and when she’s not, she catches herself and repeats what she said, adding the whole cat dialogue. It’s actually pretty cute and she seems the most normal of the four generals.

This brings us to Nicoletta. She says that she wants to go defeat the Hero so there is no threat to the Demon Lord but what she really meant that she wanted the Hero to beat her… and yell at her. She’s a masochist and is always looking for someone to hurt her but she is denied each and every time!

Next up we have Pino. She has a crush on the Demon Lord but she’ll never admit it because she’s a Tsundere. She goes to defeat the Hero but like Mako and Nicoletta, she gets sucked into joining the party and protecting him.

Finally, we have Oniki, the last of the demon guardians. Even though she’s “normal” compared to the others, she has some sort of southern drawl that she likes speaking in.

As for the Demon Lord herself… she’s just like the Hero. She’s socially awkward, prefers speaking in texts but has this dislike for most men. In fact, she got rid of all the typical men in her kingdom when they were caught hitting on all of the female demons. She’s also learned to suppress how powers because when she was 5, they were uncontrollable to the point where anyone who came near her would instantly die. No wonder she’s lonely. There is a great moment, though that after Hero pays her a compliment that she got so flustered, her control over her powers weakened for a moment and her room exploded!

Next up we have the Princess who wasn’t kidnapped against her will. She wanted to be kidnapped and admits that the Demon Lord treats her better than her father did at the castle. In fact, she doesn’t want to leave and is actually in love with the Demon Lord which poses a bit of a problem for Hero since he now has a love rival.

There’s also a couple of side characters such as Sunege, a prince of Tomorrow Castle, and REALLY bad rapper… like… he makes G-rated raps seem like a great alternative to anything he says. The Princess’ father assigns him to the party but Hero has Mako take him out before anything can happen. This angers his older brother, the self-proclaimed greatest swordsman in Tomorrow Castle, Hamige. Hamige wields the divine sword Eidrian and…. Can’t even touch Pino. She Team Rockets him out of the picture and causes him to fall in love with her!

Well… that was a ride! The story is about as simple as it can get but the wide variety of characters keeps the laughs coming. The humor isn’t annoyingly over the top like in some series (cough Girlfriend, Girlfriend) and they throw in enough references to make otakus happy… just like when Hero’s mom talks about her “Three-hit Multi-target Attacks.” They even make fun of RPGs by calling the starting area Beginnerland, followed by Nextland. Heck, the place they start in is called LMAO Castle.

Thankfully, the laughs will come for years upon years as this series is set to be a long-running manga that is sure to entertain the masses for copious amounts of time! There’s absolutely no way that we’ve already finished 50% of it after the debut volume! Such a thought is absolutely asinine to even conceive or waste any cranial capacity on! We’ll be with these characters for so long, they will become a deep and entrenched portion of our lives!

With that being said, pick up Vol. 1 if you want a good laugh with a series that doesn’t take itself too seriously and we’ll see you next time in volume tw– the final volume!

If you liked this review, consider following me on Twitter @JJPiedraOELN