If you’re one of the millions who opted in for the Halo Infinite tech preview, you should check your email. Invites for the first of many tech previews have started going on, so you may have already received one. The first tech preview is taking place from July 29th – August 1st, 2021.

This invite is to check out the Halo Infinite multiplayer component, which 343 had teased that Halo Infinite beta (or tech preview) would start shortly. Well, this is what they were referring to. So check your email, in case you missed the invite. 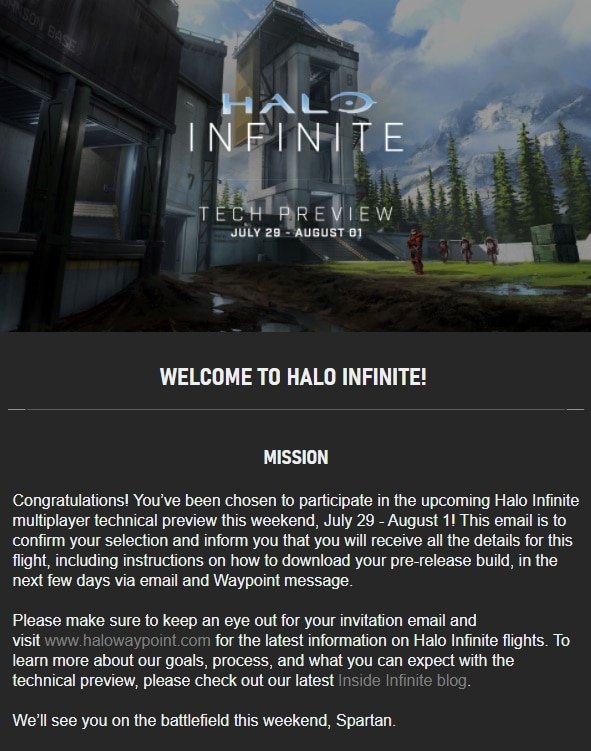 In addition, 343 tweeted out that on July 28th, they’ll host a live stream that will provide the first look at the Halo Infinite tech preview and how those who got the invite will be able to access the tech preview. If you’re either a fan of Halo Infinite or receive that golden ticket, er, invite, you’re going to want to check out this live stream.

Tomorrow, we’re going live with the first look at #HaloInfinite’s upcoming technical preview! Hear directly from the team about what’s in store, and how you’ll get in if you’re selected.

Also check out:   There won't be a Forza Horizon 5 demo according to Playground Games

Oh, and yes, I did get my invite. So expect lots of footage and talking about the tech preview — if I’m allowed to talk about it, that is.

Halo Infinite still doesn’t have a release date but is planned to be released later during the Holiday season of 2021.