Intel Gaming is currently giving away Back 4 Blood beta keys, for the upcoming beta that takes place from August 5 – August 12, 2021. If you’ve been following our content, you know that Back 4 Blood is one of our most anticipated games of 2021. Our buddy Karl even had a chance to get some early hands-on wiht the game and he loved it.

So, how do you claim your free key? You just have to head on over to this link. You’ll have to supply your name and email address and log in to one of the several social media platforms, but that’s it. It takes about 1 minute, maybe longer as the captcha kind of stinks. But that’s it. Once you do, you’ll be provided a key for Back 4 Blood. 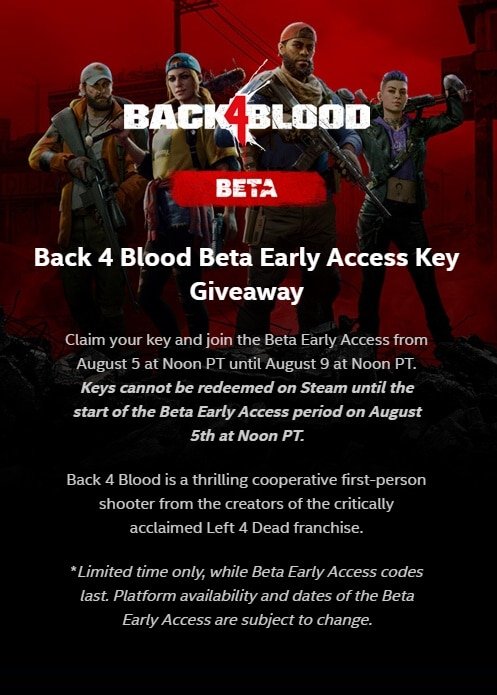 Be sure to jump all over this as the beta keys will not last and you don’t want to be that person wishing they had listened to me. Do you?

The open beta and will be available for all platforms. In addition to this, the open beta will also include cross-gen and cross-play support for the Xbox One, Xbox Series X|S, PS4, PS5, and PC. The game will also include DLSS support for RTX 2000 and 3000 series GPUs. The open beta is also quite beefy and will include two PVE and PVP maps, five playable characters, six of the Ridden (the nasty baddies), all of the in-game weapons, and access to the central hub, Fort Hope. Hey, I did say it was very beefy.