After being absent in the world of fighting for over a decade, Sega has dusted off the Virtua Fighter license and thrust it into the modern age. While we all knew Sega was working on a Virtua Fighter esports project. We didn’t know it would mean the company would re-release a familiar face, yet that’s what was done with Virtua Fighter 5: Final Showdown… I mean, Virtua Fighter 5 Ultimate Showdown.

Oh how I’ve missed this game

If you played the heck out of Virtua Fighter 5 Final Showdown, you’re probably wondering what’s changed here. I’m happy to report that in terms of gameplay, nothing has changed. If you were a beast in VF5FS, you’re going to be a beast here as well. Sega hasn’t touched any of the gameplay, and all of the moves, balancing, and everything else are the same. This is actually smart on Sega’s part, as it means both old and new can jump in and start smashing buttons.

There’s something to say about the mechanics of Virtua Fighter. Despite being left in the past, while other fighting games have seen several updates, the formula is still as solid today as it was when first released. While not as flashy as, say, Tekken, there’s still a lot of combat to be had here. Lots of small strings, leading to ground jungles, or wall bounces, into the fists or kicks of the punishing character. Even today, I’m amazed at just how well this game has aged and how it can still stand toe to toe with the fighters that have been released in the past 2-3 years. 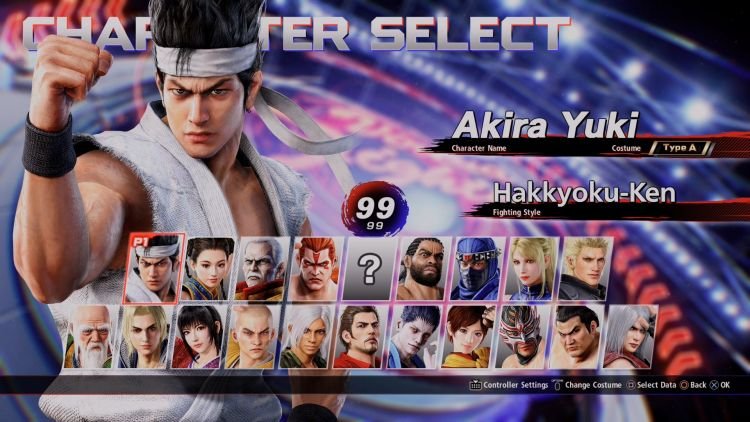 As for what did change, there’s plenty to talk about. So let’s address the visual changes – every character has been given a visual upgrade. Gone are the decent for its time, but still somewhat blocky looks. Other characters that looked odd, including Eileen, have been given a more natural look. While others have been keen to point out that Akira looks a bit younger than he previously did. The characters aren’t the only ones to get a visual bump, as the stages also look crisp and detailed. It’s a huge difference if you played, well, Virtua Fighter 5: Final Showdown. The animation of every glorious blow looks incredible and is the biggest upgrade in this version. Gone is the 720p, replaced with silky smooth 1080p @ 60 frames per second. Yes, it is not 4K, and that’s fine. Not everything needs to be 4K (I can’t believe I said that), and it works just fine here.

In terms of character customization, things have changed for the worse. Gone are the quests that would award you for your efforts with items that you could use to customize your character. Instead, you’ll have to purchase the Virtua Fighter 5 Ultimate Showdown Legendary DLC. Priced at $9.99 and only available for those who purchase the game. Yet, there aren’t as many options here to customize a character as there were in the previous game. Where you could recreate characters from other games or anime shows, now you’re severely restricted. This is a stripped-down version, and it hurts as someone who loved spending time crafting bizarre and interesting customizations. 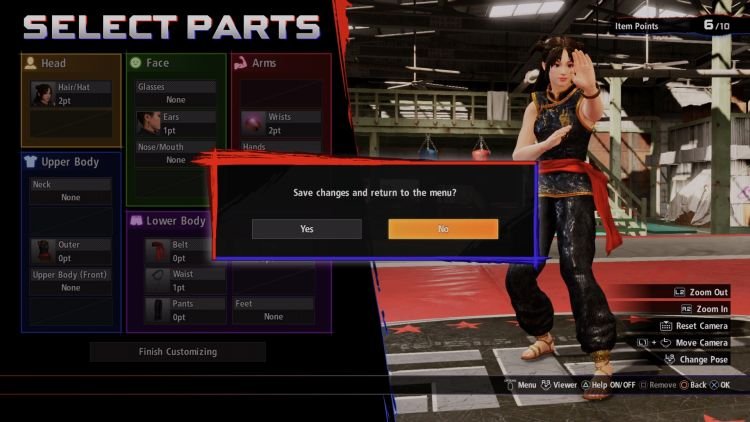 Seeing how Sega wants to push Virtua Fighter as an esports game, there have been several changes to the games’ UI. When you start the game, you’re presented with a slick yet focused menu that highlights all of the available modes in the game. This includes the arcade mode, offline versus mode, room match, tournament (which is not available yet), and training modes. The training modes are surprisingly well done and help get you into fighting form by teaching you the basics if you’ve never played a Virtua Fighter game before. As well as showing you more advanced mechanics, and they’re appreciated more than ever, especially when certain other fighting games lack explanations on how to play them.

However, several beloved modes available in prior games, such as time attack, survival, or the quest mode, have been dropped. Again, this is an “esports” game, and thus everything included in the game is meant to capitalize on that attempt. I can’t say I agree with this move, but the damage has been done.

Lastly, something that may not be a big deal to some, but I loved it, is the ability to change the in-game soundtracks. In the options, you can select from all of the previous Virtua Fighter soundtracks, instead of listening to the VF5 soundtrack. For me, I have a crush on the Virtua Fighter 2 soundtrack, so being able to listen to it while playing the game was a nice touch.

Let’s talk about the online experience

One of the biggest concerns with any fighting game is the netcode. What type of netcode is being used, how is it implemented, and ultimately, does it suck? This is sadly something that Virtua Fighter 5 Ultimate does suffer from. Depending on close or far away you are from, these locations will dictate your online experience. As you can see, certain regions are fine, while others are completely screwed over.

For example, if you play VF5Us in North America, you’re pretty much going to have a good experience. The same can be said for the UK and most of the Eastern hemisphere. However, South America and Australian players aren’t going to be saying the same thing and will likely have a terrible time playing online. 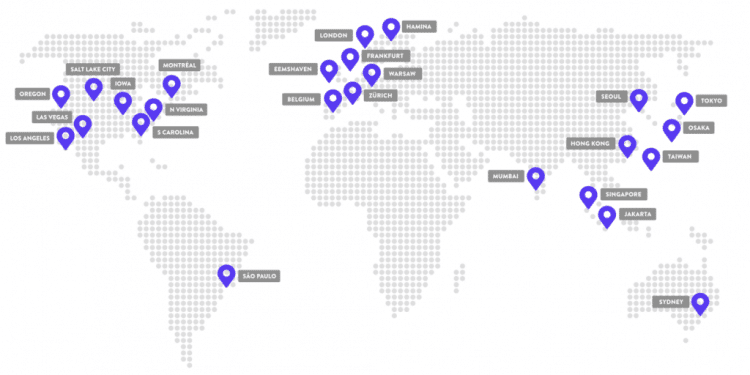 As for my experience, I’ve yet to experience a laggy game. Of course, I’m also dead smack next to one of the relay locations, so that’s expected. Though that was also before the game was released, and not many people were playing it. Thankfully, you can restrict the connection of who you fight against and avoid lagged out players. The cost is you miss out on fighting a bunch of different players. I hope Sega revisits this because I think this is an issue regarding the games’ longevity. Assuming the game lasts that long and Sega actually cares.

Creating rooms or inviting friends for a quick match is more of a pain than it should be. First and foremost, there is NO way to invite anyone to your game. A feature present in Virtual Fighter 5 Final Showdown is gone and is a complete miss on Sega’s part. As for the room matching, it’s not much better there. Sure, you can create a room and customize it to your liking; it’s all good there. However, when it comes to getting people into that room, this is where things fall about.

There’s a room browser that randomly shows about 15 rooms at any given time, and when you refresh this list, you get more random rooms. So if you’re trying to find a friend’s room or vice versa, it becomes an exercise in frustration. You’ll have to keep refreshing and searching before you find the specific room, and that’s terrible – especially for a game that’s being pushed as an esports game. What’s the point of having the ability to play online when matchmaking is this busted? Other games such as Street Fighter V, Tekken 7, and others have this ability. This is as bad as the lobbies in Guilty Gear Strive that I experienced in the beta a few months back.

Sega, please address this. If you want this game to thrive for online play, this needs to be fixed. 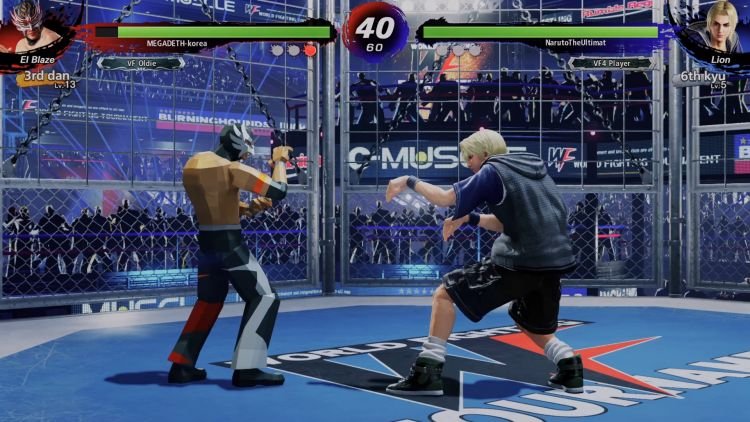 I’m just going to come out and say it – making Virtua Fighter 5 Ultimate Showdown a PlayStation exclusive was a dumb move. A remake of a game that did well on both the PlayStation 3 and Xbox 360, now excluding an entire console for one reason or another, is bad. At best, you’ll have fewer players playing the game; at the worst, this game dies out quicker than Battleborn due to excluding players who don’t own a PlayStation console.

To rub salt on the wound, it isn’t even begin released on the PC. I can see why not the Xbox, especially since the brand doesn’t do well in Japan. A country that Virtua Fighter does extremely well in. But it also isn’t making its way to the PC. A platform that Sega has been supporting more and mover over the past year.  It’s definitely an odd move to me. 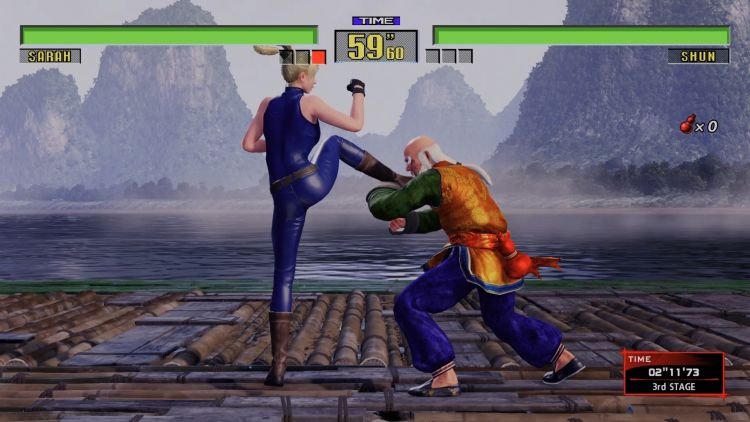 Virtua Fighter was a powerhouse when it was first released. The second 3D fighting game, and one that created the 3D fighting game genre. And despite it being absent for more than a decade, there’s little doubt that Virtua Fighter 5 Ultimate Showdown has brought the title back to the forefront. The king of 3D fighters isn’t something I’d toss around lightly. And yet, if you asked me if I’d rather play this or Tekkken (No disrespect to Tekken), I’d play this all day. Sega has worked its magic, and I’m happy to see that I’m not the only one enjoying this game. My only concern is three-fold; does the game have staying power, and is this merely a test to see if the fighting game world is ready for the next chapter in the series? Lastly, and not to beat a dead horse, did this need to be a PlayStation exclusive?

Review Disclosure Statement: Virtua Fighter 5 Ultimate Showdown was provided to us by Sega for review purposes. For more information on how we review video games and other media/technology, please review our Review Guideline/Scoring Policy for more info.

Affiliate Link Disclosure: One or more of the links above contain affiliate links, which means at no additional cost to you, we may receive a commission should you click through and purchase the item

Despite having a few flaws, such as missing modes and the lack of being able to invite friends for some online bouts, Virtua Fighter 5 Ultimate Showdown is a solid title. If and when Sega addresses the online issues, this will be a title that everyone will be playing, there’s no doubt about that. Now if it was only available for the other platforms, it would be even better.