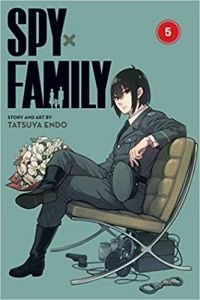 There are some new dynamics opening up in the fifth volume of Spy x Family! Mid-terms are coming up and Anya needs to pass these as if she fails, she will receive a Tonitrus Bolt. Scoring in the top will earn her a Stella Star, though. She also realizes something about the moon… if there is a New Moon, she loses her ability to read minds so she cannot cheat during the exam! This causes Yor’s brother Yuri to show up and tutor her. He tries for hours and gets nowhere.

After the exams, Twilight realizes that he’s going to have to take measures into his own hands and tries to sneak into Eden Academy in order to alter Anya’s test answers; however, he runs into some opposition in, quite possibly, the world’s worst spy Daybreak.

After that event passes, Anya needs to participate in arts and crafts and ends up at the same table with Sy-On boy (Damian). Damian wants to do his family crest and Anya sees this as a chance to help, get on his good side, and allow Twilight to get closer to his father. Of course, Anya utterly fails; however, not all is lost. The results of their efforts were rather hilarious!

This brings us to the final arc of the volume where we meet Nightfall aka Fiona Frost. She is a member of Twilight’s agency and has been paired up with him for a side mission; however, she’s trying to interject herself into Operation Stryx and is seeking to replace Yor as Twilight’s pretend wife!

None of our main cast has significantly developed with the exception of Yor wanting to take the role of the housewife a bit more seriously. There is a section in the volume where she is trying to learn how to cook and while she is able to nearly replicate a stew her mother used to make, anything else she touches is still, pretty much, poison. Nice to see her trying to fit her imaginary role, though.

Daybreak was a bumbling spy that makes you wonder just how he got into and survived in his line of work? He’s ungraceful, not stealthy at all, way too obvious, and braggadocious! In fact, instead of hiding his mission, he wants his name to be broadcast everywhere, thinking that it would lead to fame, fortune, and higher-profile jobs. He is, for all intents and purposes, a bumbling idiot. So much so that Twilight felt that the best course of action for dealing with him was to just let him do whatever he wants until he was done and out of the way!

The next spy we meet is Nightfall. It’s made pretty obvious at first and then it is flat out stated that she’s in love with Twilight. He was her mentor when she became a spy and she took every word of his as seriously as humanly possible. When she was assigned to be his partner for this side mission, she saw it as an opportunity to interject herself into his main mission in an effort to become his pretend wife all so she could one day hope it would lead to a real-life marriage.

Anyone ever see the Hot-Crazy Matrix on YouTube? She’s right up there with girls named Tiffany. This should be interesting; however, I don’t see her replacing Yor anytime soon. Besides, we already know that Yor is best girl and that they will probably become a real family in the end once this Cold War is over and done with!

There was some nice side content here between Anya and Damian although my only little gripe is Yuri’s usage. He just seems like a comedic relief character that’s being called in whenever the book needs a few laughs. What happened to his main mission of catching Twilight? Sure, it’s mentioned here but there wasn’t really anything that suggested that he was working on it. Oh well… it’s just a minor thing, anyway.

Even though it’s pretty predictable that Nightfall won’t get her way in the end, it’ll still be fun giving it the old Eden Academy try. She’s expecting her own Stella Star but we all know that this entire thing is going to end up in a Tonitrus Bolt for her.

I will say, though that it was pretty interesting to know that Anya’s powers are negated by a New Moon. While her powers were sealed for the mid-term exam, it makes you wonder if that plot point is going to come back around in the future at a moment where it’s really going to count? Then again, with Bond being able to show her the future, she has a bit of a failsafe to work around something like that.

All-in-all… another great volume! Many laughs were had with this one and if you’re not checking it, you probably should be!