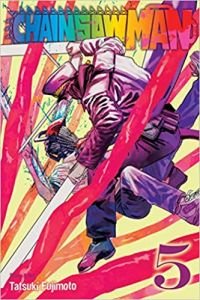 Volume five of Chainsaw Man sees a pretty interesting development. Denji has another encounter with Samurai Sword. Things get settled once and for all between the two of them and Denji gets rewarded by going on a date with Makima! She tales him around the city to different theaters as they watch movie after movie together. It’s actually pretty cute that they have the same exact reactions and thoughts to the movies they saw together! After the dates conclude, Denji swears that no matter what, his heart belongs to Makima…

…until he meets Reze! It starts to pour so Denji takes shelter at a bus stop with his new partner, a Shark Fiend named Beam, in tow. If you’re wondering what happened to Power… simply put, she drank too much blood and had to be borrowed for a blood draining.

Reze “works” at a small café. By work, I mean she hangs out there, occasionally helps customers, but spends most of her time just sitting around not doing much of anything, much to her manager’s chagrin. Denji shows up there every day and has a bit of an internal conflict. Reze comes onto him pretty hard so he’s torn between giving his heart to Makima and his body to Reze. Since Denji has never gone to school, the two of them go on a pseudo date to a school where she teaches him some things… including how to swim.

We are also introduced to a hunter who has made a contract with the Typhoon Devil. The obvious goal is that Typhoon wants Chainsaw’s heart. He heads to the school where he assaults Reze.

Denji going on a date with Makima was super cute. It was some nice misdirection by having Denji pledge his heart to Makima but get instantly swept away by our new character, Reze. Just makes you want to smack Denji around a bit. Still nice to see their relationship growing, though.

Speaking of characters, Denji wasn’t the only one to receive a new partner. Aki received one as well in the form of the Angel Devil. Aki wants to kill more powerful demons so he can get on the Gun Devil Hunter team so he enlists the Angel Devil’s services since it was said that he was one of the strongest in all of Division 4… even stronger than Kishibe. The only downside is that he’s incredibly lazy! This makes the two of them like oil and water. It’ll be interesting to see if Aki can actually get along with him.

Then we have Reze! Man, she is a tomboy and a half! She’s cute yet very forward and probably the best kind of personality to match up with Denji! You’d think that she would end up becoming best girl and competing with Makima but there seems to be more to Reze than meets the eye. Where have I seen this before? Hmm… Reze… Rize… Devils…. Ghouls… café worker… café worker… I’m starting to wonder if there is some sort of tribute going on here? Still, she’s an interesting character and I want to see where her story takes her! Hopefully, she’s not just a “story arc” character and ends up sticking around for the long haul.

A bit of a slower volume even though there was some action in it. Chainsaw vs Samurai Sword was a good fight, albeit too short for my liking. I really wish some of these fights were longer than they were… especially since they built him up to be such a threat. To have it end in just a couple of pages felt pretty underwhelming.

The date was cute and having Reze try and teach Denji was even cuter. I didn’t like how they introduced the Typhoon Devil and then just ended his plans almost immediately. So much for building up the next big “threat” to Denji. Although, I guess it does further the overall plot of the Gun Devil wanting the Chainsaw Devil’s heart and is employing any and all demons who want to try and take it. Still, I just wish there were some more depth to these. So far, all of these devils seem like nothing more than expendable cannon fodder and that’s a bit annoying.

Despite that, it didn’t prevent this from being another great volume. I’m having a blast reading it and it’s already made me add the anime adaptation to my “To Watch” list!