Fly Me to the Moon Vol. 5 Review 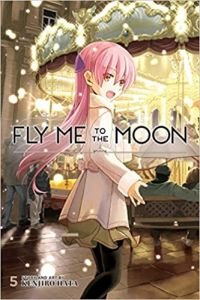 Fly Me to the Moon Vol. 5 goes beyond what was adapted in the television anime… sort of. While the anime ended right after the Takoyaki Party with Nasa getting sick, him getting sick wasn’t in this volume. However, there were some later chapters that were adapted so the anime did things a bit out of order but through it all, there was some new content.

In addition to the “Takopa,” Nasa took Tsukasa out to buy a smartphone and take her on a date to the aquarium. The date was pretty hilarious as Nasa was expecting something bad to happen so that they could learn a bit more about each other. In fact, he was actually hoping something would happen but nothing did.

Later, Tsukasa learns how to use her phone and discovers just what kind of online presence Aya has. She’s on Instagram, Twitter, and YouTube where she does video game reviews and playthroughs. She also discovers that Aya writes poetry and even remarks that she has more layers than people give her credit for!

Later, Kaname and Chitose show up and try to distract Nasa while he’s doing some programming. There’s a challenge over who will eat the last fig but no matter what they do, Nasa’s concentration can’t be broken… even with Chitose dressing Tsukasa up in her maid outfit!

And thus ends another wholesome and cute volume of Fly Me to the Moon!

Honestly? The only character that saw any kind of development was Aya (aside from a new character we got introduced to.) We knew Aya was good at video games but discovering just how big her online presence was a bit fun. Learning that she can write poetry was in direct opposition to her normal airheaded personality, too. It was funny seeing someone like her be good at a polar opposite skill from who they are. Then again, maybe she’s a genius in her head but just can’t express it outwardly? Someone who is good at games like that and can construct poems can’t really be a dunce, can they? Makes me wonder if there’s a smokescreen to all of this!

The new character is Yanagi, Nasa’s middle school teacher. She’s worried because grades are slipping and since Nasa isn’t in school any more that the only thing holding up their curve is gone. I’m sorry, but I laughed out loud when it was revealed that Nasa alone was responsible for the entire school’s grade average. I won’t speak negatively about the children but it makes you wonder about the quality of the education vs the quality of the people attending there.

After Yanagi runs into Nasa and finds out he’s married, she makes a house visit to meet Tsukasa. She suspects something is amiss as she figured that Nasa would have married a street thug. Tsukasa seems almost too perfect for her but she can’t really find any evidence to support her feelings so she just leaves after accepting some of their hospitality. Not sure if we will see more of Yanagi-sensei in the future but she did make for some nice comedic relief! She did learn a life lesson from Nasa which made me laugh. I know it was supposed to be a sweet moment but when someone of Nasa’s age can teach a teacher an obvious lesson, it REALLY makes you question the quality of that school.

Fly Me to the Moon continues to be an overly cute series (as if this were anything new at this point.) I don’t what I can say that I haven’t already said about it. Nasa and Tsukasa as still perfect to a fault, the comedy is still very natural, Chitose is still a tsundere that refuses to acknowledge her love for Nasa even though it was called out blatantly by the narrator, etc., etc.

It continues to be a wholesome ride from beginning to end but I find myself like Yanagi. In fact, I have found myself that way this entire series… why did Tsukasa do what she did? She did she save Nasa and why did she marry him? I mean, some of her past was revealed but we still don’t know the true answers to those questions. Maybe this series is so simple that there is no answer and we’re supposed to just accept it or maybe there really is a deep, dark, mysterious secret that she’s hiding?

Whatever the case, it’s still a fun ride!