Surprise! On top of being a horror fan and TV/Film maven, I also crochet. I know, I contain multitudes. So when I found out there was going to be adorable Final Fantasy crochet patterns to try, I grabbed my hook and dug through the ole yarn bin to make me some cuteness!

Final Fantasy XIV Online teamed up with an Australian mom to make five absolutely adorable patterns for different characters in the Final Fantasy Universe. These patterns were designed by Natalie Schwarz from Little Cosy Things and include the Moogle, Namazu, Spriggan, Korpokkur Kid and Great Serpent of Ronka. 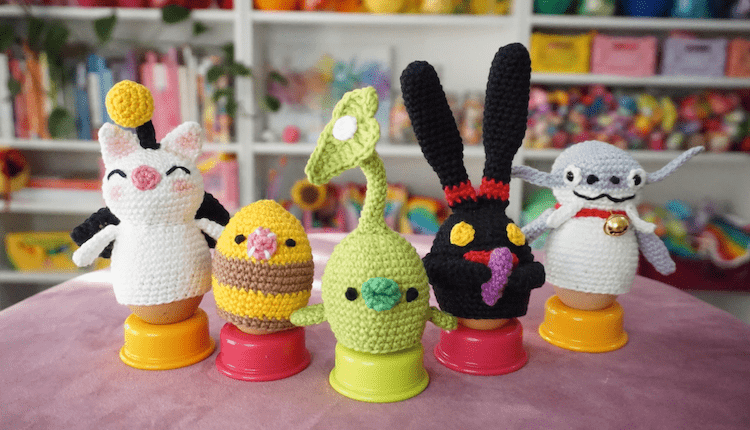 Now, being me, I had to give one of these a whirl, and being a fan of both Final Fantasy and Kingdom Hearts, I had to go with the Moogle. I have to say that the patterns themselves are actually fairly accessible for beginners, and will be a breeze for those intermediates and above. They come with nice guides on the stitches in case some are new to you, and have lots of pictures to help along the way.

I will say egg cozies aren’t as big in the U.S. since we don’t have a tradition of eating hardboiled eggs in egg cups (I know, we’re the worst). You can repurpose them to cover just about anything or use like a finger puppet. Or, if you’re particularly experienced in crochet, you can always add in a row at the end of single crochets in the back stitch, followed by a row of single crochets and then do rows of decreasing stitches to close the hole (don’t forget to stuff though!).

For the Moogle design, there were several parts, including two wings, antenna, poof, nose, arms, ears, body and head. You also use black yarn to make some eyes (though hot glueing some felt will also do) as well as using pink powder/blush/eyeshadow for the tint on the cheeks and ears. For the latter, you could use a pink paint marker though it will come out darker than the picture, or felt, which I recommend. I had a lot of trouble with eyeshadow and frankly cannot recommend that method and used paint.

So, as any crocheter worth their stitch markers will tell you, trust in the pattern. Schwarz’s patterns are easy to follow, but definitely check your gauges before you start. I think these patterns also work best with fingering weight yarn, i.e. weight 2 yarn, though the pattern calls for worsted light (i.e. weight 3). I ended up using a weight 3 yarn because it’s the easiest for me to find at my local craft store. I still found that the body and head ended up way too wide at the bottom, so add decreasing rows as needed. I went to a decrease every 2 single crochets on the head, and should have done so on the body as well but decided to leave it as instructed. I would also recommend sizing down your hook from the recommended 3mm to a 2.75mm if you’re worried about size. 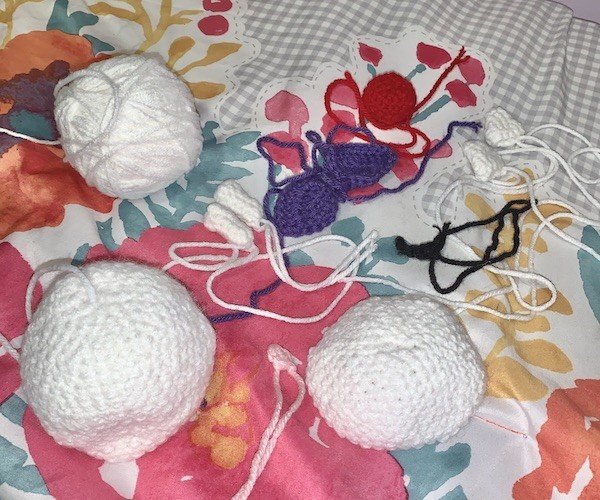 All of the separate parts for the Moogle (also yes I crochet in bed, what of it?)

One issue I had was the antenna wasn’t strong enough to hold the pompom on its own. It is only a row of single crochets, and the pompom is stuffed so it does weigh more. This was easily remedied with a toothpick. Looking through the other patterns, all of the other creatures have more than adequate support for their upper portions. Also I really should have measured the arms to the length of the body, so definitely check your gauges while making these.

Ultimately, this took me about two and a half hours to put together (shave off a good 15 of those minutes for my first head attempt), and we easy enough to sew together. My Moogle isn’t as perfect as Schwarz’s but hey, whose first run at a pattern ever is? As long as it’s cute, it works. 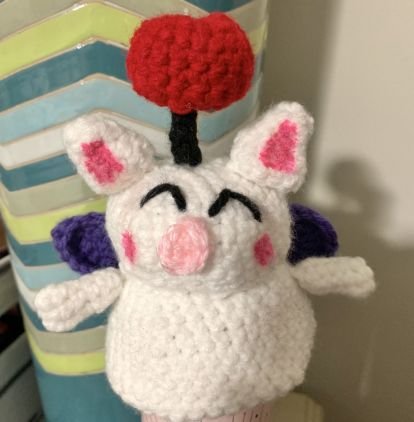 I tried and therefore no one can judge me