There’s just something so funny and yet sweet about the concept of an all-powerful killing machine hanging up his sword and deciding to go domestic. It’s even funnier when said all-powerful person literally cannot give up their intimidating nature. Gokushufudou or The Way of the Househusband follows Tatsu, former yakuza legend in his new everyday role as a stay-at-home spouse, applying the same level of intensity to chores as he once did to beating up gangsters.

Based on the ongoing manga by Kousuke Oono, The Way of the Househusband chronicles househusband Tatsu as he goes through his day, be it shopping for groceries, cleaning the apartment, or working out with local housewives. Of course, he is still an incredibly scary figure, what with his tattoos, dark shades, deep voice, and intimidating head-tilt. He often defaults to his old ways of doing things, like accepting responsibility and offering to be thrown in the ocean after losing a friendly volleyball game, or burying a broken figurine inside of a metal drum in the backyard like he’s hiding a body. He’s dedicated to his wife Miku, a designer by trade, and does everything he can to help support and cherish her, even learning how to cook and buying her things he thinks she’ll like. 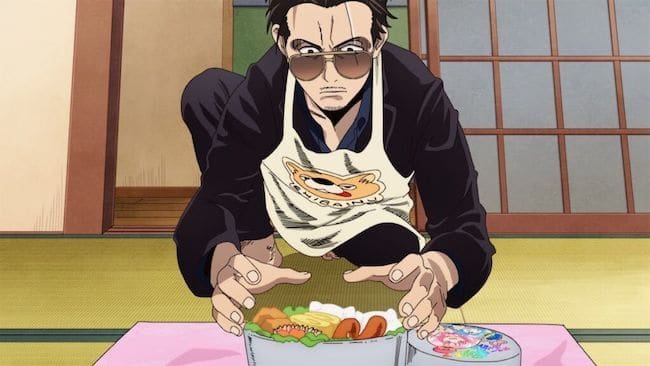 The show is only five episodes long, though each episode is broken up into smaller episodes, more a series of vignettes rather than an overarching narrative. The majority of them focus on Tatsu as he navigates chores and shopping, or encounters other yakuza who want to fight him, only to become immediately confused by his new occupation. There are also three shorts that focus on Gin, Tatsu and Miku’s cat, going on adventures which are especially hilarious. I definitely wish there were more adventures, and maybe a little more backstory, in this season but I’m also pleased with what there was. It’s an easy show to watch in one go.

The center of the show is the way other characters react to Tatsu. I thought his relationship with his father-in-law was the best, given that both are eager to have the other think well of them. His relationships with the other housewives of the neighborhood are really cute too, as they embrace him pretty readily and forgive his eccentricities while including him in activities. He’s also a doting husband who works hard and does his best to keep the household running smoothly, especially after a long day of work.

I think the best part of the show is not just the juxtaposition of Tatsu’s yakuza habits and househusband chores, but also just how good he is at it. Whether it’s his previous experience coming into play or genuinely taking the time to learn new skills, Tatsu’s able to handle anything that comes his way. Cooking, cleaning, caligraphy, shopping sales, making furniture; he takes on everything with gusto and never complains. Even when he does struggle, he manages to make it work. The humor is strong, though the barrier for entry might be a little high for those who are less familiar with tropes about the yakuza and Japanese day-to-day life. 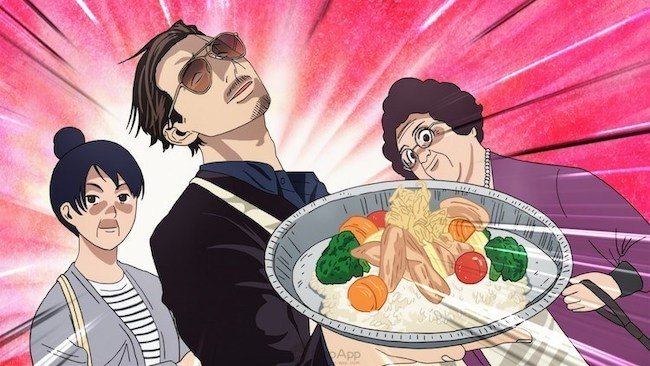 The animation isn’t in the traditional fluid style, but more like colored manga panels that have lip movements and action added. Adding to that comic-like feel, there are also lots of sound effects and action descriptions written into the background. At first, the choppiness of this style threw me off, as I was expecting a more traditional flow. However, as I watched more episodes, it was clear the style was meant to highlight the drama and intensity of Tatsu’s approach to life. It also gives the show a unique sensibility that stands out from other shows.

The voice-acting is great in both the original Japanese and the English dub. Kenjiro Tsuda’s deep voice really works for Tatsu, giving the part a lot of attitude, but Jonah Scott’s definitely has a little more of that amicability. Shizuka Itō has more emotional range as his wife Miku in my opinion, and Kazuyuki Okitsu definitely got more of that bratty kouhai sound as Masa, one of Tatsu former associates. I will say Laura Stahl is absolutely hilarious as Gin the cat, though M.A.O did a great job in the Japanese as well. 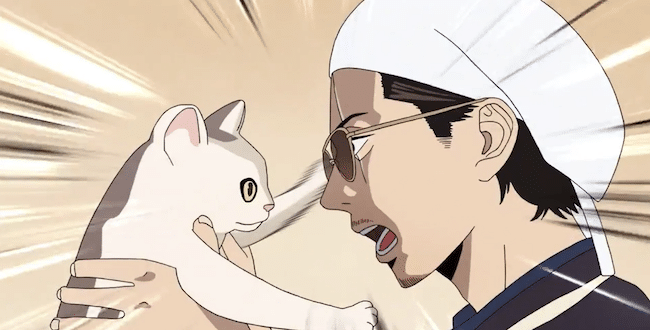 Seriously, the cat is comedy gold!

Overall, The Way of the Househusband is a fun, light-hearted anime that is both humorous and endearing. My only major complaint is that it’s over way too soon, but with a second season on the way, all I ask is for more adventures (and some backstory please?).

The Way of the Househusband is a charming, quirky anime that juxtaposes Japanese gangster tropes and mundane chores. While the animation style takes a minute to get used to and the season is slightly too short for my taste, you will fall in love with the characters and the premise easily.