Restaurant to Another World Vol. 4 Review 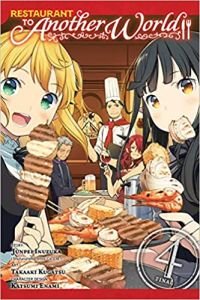 We went from thin boi to thicc boi in the span of one volume! Normally clocking in at about 150 pages, the final volume of Restaurant to Another World weighs in at a whopping 257 pages!

The final volume gives us more of the same as we get some individual stories from within the world of Nekoya coupled with that chapter’s signature dish followed by an abundance of Food Network-style descriptions of the food.

However, mixed within the standard helpings of this laid-back and relaxed manga was a cute origin story of Nekoya of how Daiki met up with his wife Yomi. She later returns at the end of that chapter and hands over the master key of Nekoya to her grandson. This key has the power to close the door to the restaurant forever. I thought that this was how the manga series would end but, thankfully, it did not. However, it does establish the fact that Tenshu does have the power and ability to close down the shop on his terms!

While the ending to a manga is usually avoided due to spoilers, I think it’s very safe to talk about this one because there was no major cliffhanger or super-huge event to send us home. It simply consisted of Aletta reflecting back on walking through the door and all of the memories she made there. Kind of like a moment of self-reflection… and that’s it. She didn’t quit, the place didn’t close, nothing dramatic like that. Just one of those moments where you look back and appreciate everything that you have been given!

Also, I had to facepalm at one of the chapters. Julietta and Romero? C’mon, man… haha!

I’m not sure if this development goes to Tenshu, his father Daiki, or his grandmother Yomi but with the origins of Nekoya being explained, it really gave a lot of depth to the restaurant as a whole. Indirectly, the origins spoke to all of the characters as if it weren’t for that moment where Daiki found Yomi unconscious on the beach and offering her a pork cutlet meal, then none of the events in the series we’ve read would have taken place. Just one small chance meeting like that created a spark that set their entire worlds ablaze and is a nice reminder that sometimes the smallest things in life have the biggest impacts!

Aletta didn’t really get much development but with the way the manga ended with her self-reflection, you could definitely tell just how thankful she was for everything. After being looked down upon because of her demonic horns, she finally found a place that accepted her for who she was. Also… I was a bit miffed that they FINALLY teased a romance for her but it went nowhere! Shouta brought her some Tuna Mayo Corn Rolls from their family’s bakery. It was SUPER obvious that Shouta has a crush on her as both Tenshu and Black picked up on it immediately. The romance feels there were super cute but they didn’t really follow up on it! C’mon, man! We need more Shouta x Aletta shipping, stat!

Overall, I loved this series. Sure, in a world where Food Wars: Shokugeki no Soma reigns supreme in the food manga genre, Restaurant to Another World offers something similar yet calmer. Clothes don’t explode, there are no competitions or anything of the sort. What you get is just a good, wholesome story that you can sink your teeth into (ah, food puns.)

Each chapter is episodic, some characters are recurring, but the stories that tie into the dishes are well-crafted and while they come in short bursts, I kind of wish some of them would continue on further. The essence of this series is just about a restaurant that appears once every seven days in other worlds and people venture in, sit down, share a story, and have a good meal. That’s it. Nothing more, nothing less. It’s calm, relaxing, entertaining, and very evil if you read it on an empty stomach (to which I’ve made that mistake multiple times!)

Being only four volumes, it serves as a quick read so if you want a relaxing series with normal food with not-so-normal customers sharing their interesting stories, then this should be a smash hit for you! Indulge yourself and give it a try! You might just find yourself coming away stuffed with goodness!