In Another World with My Smartphone Vol. 1 Review 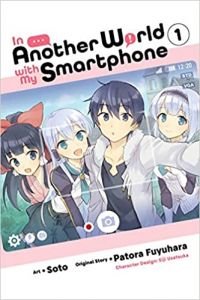 Touya is dead. Apparently, it was God’s fault for accidentally striking him with a lightning bolt. Feeling remorse, he tells Touya that he will send him to another world to begin his second life. Touya, for some reason, sees no problem with this nor is he even angry that he’s dead. He has one condition, though: he wants to be able to use his smartphone. God updates it to work in his new world and allows him to have mana to recharge it. He also enhances his body in many different ways, allowing him to be really strong and use magic.

Then plop. In he goes.

From here, he needs to get his footing in this new world. He runs into a clothier named Zanec who is marveled by his clothes. He sells them all to Zanec for some gold coins. He heads to an inn where there is a commotion outside where two girls, Elze and Rinze, are being swindled over a deal gone bad. Touya intervenes and saves them. He learns about the guild and how they offer jobs. Figuring this would be a good way to earn some of this world’s money, he joins the two of them and goes on a job to hunt one-horned wolves.

After completing that, they take another job to deliver a letter from Zanec to the Capitol. In between, Touya asks Rinze to help him read and write and to teach him about magic. Apparently, he’s like the Sage of the Six Paths from Naruto and can use every single element… including Null… making him an extremely overpowered main character in an isekai. Thank God we haven’t seen this archetype before ^_^

Along the way, they come across the duke’s daughter, her grandfather, and their guards. They are under attack by a summoner so they deal with it and save the grandfather’s life. The girl is named Sue and she introduces him to her father, the Duke who rewards them very handsomely. After that, it’s off to deliver the letter, and… well… that’s the end of the first volume!

Being a first volume, it’s natural to get introduced to our main cast of characters and that’s exactly what happened!

First up is our main character Touya Mochizuki. Because he always introduces himself by his last name first, everyone thinks he’s from a town called Eashen. In fact, as the manga goes on, there is this strange sense that Eashen is a lot like Japan… especially when it comes time to pick out a weapon and he is drawn to a sword that resembles a Japanese katana which is from Eashen. That aside, Touya is rather indifferent in the personality department. He just goes with the flow and has a solution for every problem. Essentially, he is a Deus Ex Machina character who can do anything to solve any problem. I kind of have a problem with these kinds of characters because everything is solved in such a convenient way. They are completely overpowered and it kind of takes the element of danger out of the story because you know that everything is going to be fine in the end. I don’t see this changing throughout the series so I supposed I’ll have to live with it.

Rinze and Elze are twin sisters. Their personalities are rather flat with the only interesting thing between them is the fact that they are sisters and can’t use the same type of magic. When Touya brings that up, it becomes a rather touchy subject for them. Outside of that, there isn’t anything really interesting about them. They seem like characters that were just plugged into the story to serve as plot devices for Touya… such as teaching him reading, writing, and magic. I would have thought one of them would have been the tsundere sister while the other one was happy-go-lucky who fawns over the main character onto to have the tsundere want him more but too reserved to act on it… that could have breathed some life into them; however, all we got was two girls who seem rather neutral with standard personalities.

Lastly, rounding out the main cast is Yae. She seems really friendly; however, the way she talks is the way the samurai of old back in Japan spoke. Touya picked up on this immediately! She joins them when she discovers that they all have business in the Capitol. She can put away food like it is nobody’s business but she’s very polite, respectful, and disciplined… just as you would expect a samurai to be. So far, she is my favorite character in the series but it’s kind of by default. By that, I mean she’s the only one that really stands out with any kind of unique personality. I’ll have to see more of the series to see if any new characters come along that might steal my interest away from Yae.

With the tropes aside, the first volume wasn’t all that bad. It was still an entertaining read and there was enough there to hold my interest and make me want to see the next volume. While there were a lot of convenient Deus Ex Machina moments, I didn’t really have a problem with them simply because I’ve seen this so many times, I’ve kind of become numb to it all. If this were the first time I had experienced this, I probably would have had a bigger problem with it but since I’m used to seeing this in an isekai series, it has become par for the course.

It still doesn’t prevent me from wishing that mangaka or light novel authors put more effort into their stories to make them unique but sometimes they write and create things that are popular and they know will sell and something like this follows the “make money with an isekai” formula pretty well so if they’re getting paid, then who am I to complain?

The big hook for this series seems to be getting to Eashen. It almost seems as if this is going to be the end goal of the series. Also… for a series that boasts a smartphone being the major hook, it wasn’t really used all that much in the first volume. He used the map function twice, found a recipe for ice cream, and briefly checked the news back in Japan, and… that was it. I would have thought it would have come into play a lot more but, apparently, this just boiled down to a standard fare isekai where the main character just happens to have a smartphone.

Maybe it will become a bigger focal point in future volumes? We’ll have to find out. Still… regardless of the issues, it’s still a fantasy series and I’m a sucker for fantasy so I do want to see more of this! Bring on volume two!