I want to fight other players. Why is that so hard?

I did it! I finally got some matches in with Arc System Works Guilty Gear Strive open beta, and while I got wrecked, I enjoyed myself. Well, mostly enjoyed by self. Thanks to the joke of a lobby system that, for some reason, Arc System Works thinks this is what the players wanted. Below, I’ve detailed my experience with the lobby system and the frustration that ensued by trying to get into a match with another player. If I had to sum it up in one word, that word would be “Frustration.”

The lobby sucks. There I said it. I have no idea why Arc System Works thinks this is a good idea. In fact, it feels more like a social experiment gone wrong. When you first attempt to play online, you’re sent to the lobby and met by a digital avatar that resembles a butler. Here, you’re tasked with creating your own avatar by selecting a number of options from your skin tone, shirt, pants, shoes, and other bits.

Once that’s done, you’re given an introduction to how the lobby works. There 10 levels of a tower, where the higher caliber players are placed at the top and the lower at the bottom – reminds me of a certain anime. You’re then tasked with fighting an opponent that, at first, I thought was an actual player, but it was an AI-controller player. Based on that fight, you’re placed on a floor in the tower, consisting of 10 floors. After all that, then you can actually participate in multiplayer matches. 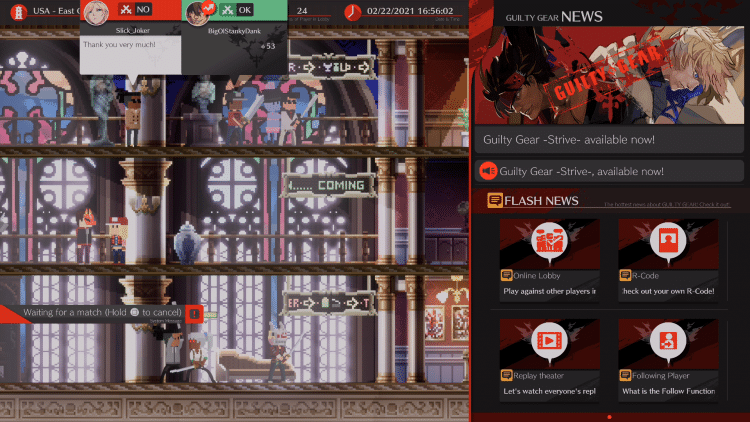 I am not a fan of this presentation.

This is where it gets silly. Instead of being played in a pool of challengers, you’re thrown into an area with up to 32 avatars wandering about the place. Here you can look at someone’s various info and challenge other people. Except the last bit isn’t so easy. What makes this so bad is that the various players have to enter a ready-up state before you can fight them. Meaning if no one reads up, you can’t challenge them. To make matters worse, when someone does ready up, they can randomly be moved around in the area you’re in. So if they’re next to you, they can be moved anywhere, something that happened to me even after speaking to someone about setting up a match.  It gets doubly frustrating when there are so many people looking for a fight that, at times, it turns into a mad dash to find someone who is readied up.

Many people hard up for a fight that some resort to standing another readied-up person and set up shop there. So if you were playing with a friend and you’re getting ready to challenge them, someone could overlap them, and suddenly you’re not facing your friend.

Then once you fight a match, you can’t set the bout’s perimeters, at least in the beta. You cannot change the number of rounds, the stage, or music; nothing is accessible. You’re just placed into the fight and pray that it doesn’t prematurely fail due to the game being peer to peer. Not being able to change the number of rounds is so stupid, especially for a game like Guilty Gear Strive because it’s so damage-heavy. Matches have been known to over in a blink of an eye, yet somehow, someone thought it would be a good idea not to allow players not to change the match settings. Really? 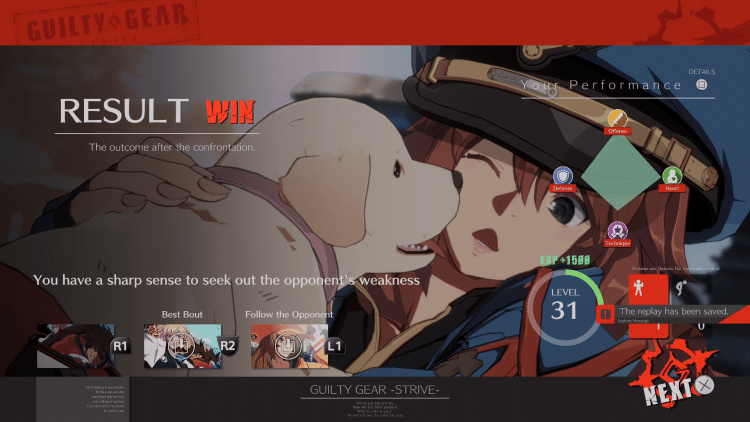 Oh, and there’s no rematch option. I don’t even understand how this was missed. How in the hell do you have a fighting game and not include an option to rematch someone? Please don’t assume we don’t want to fight the same person, over and over. If they wanted to keep things fair, they could have only allowed players to rematch someone a few times. And if someone doesn’t want to rematch, they can drop out. What’s so hard about that? Even with those concerns, I won’t mind if matches taken take so long to get started. But they, in my experience at least.

Argh, it’s so frustrating that Arc System Works thinks this is what the players wanted. Sure, I’m not the biggest GG player out there, but after speaking to a few other players, most were in agreement that they aren’t fans of the lobby system. I’m really hoping that by the time Guilty Gear Strive is released that lobbies see a change. Because as it stands right now, it’s crap and not very enjoyable. I suppose this is why everyone who originally saw the lobby thought it was a joke. The lobby system’s entire goal is to make it easier for people to jump into matches. C’mon, this ain’t it.

TLDR; the lobby system currently in GGST is bad. Where are the rooms? Why is there no rematch option? Why can’t we change the match settings?

But hey, at least the netcode is solid.

Guilty Gear Strive releases on April 9th, 2021, for the PS4, PS5, and PC. There will be no cross-play between the console and PC versions.

Most people in the Guilty Gear community have said this for the duration that we’ve known about the lobby. ArcSys just didn’t want to remove it for some reason lol. Atleast they listened to the netcode complaint and added rollback netcode.

I hope we can at least set up private rooms.