There’s nothing like the rush of stirring up mischief. Whenever friends are arguing, I’m the guy who can’t resist jumping in with a point made purely to get a rise out of everyone. Living that way all the time is a great way to get punched in the face, but thanks to Square Enix’s upcoming tactical RPG Project Triangle Strategy I’ll be able to sow plenty of chaos without having to worry about real world repercussions.

Project Triangle Strategy stands out from other tactical RPGs through a persuasion system that determines the course of the story. In the demo released after Wednesday’s Nintendo Direct, Lord Serenoa, the game’s protagonist, is forced to choose between handing Prince Roland to the evil Archduke of Aesfrost or fighting a battle that would almost certainly end in defeat. The catch? Serenoa is a medieval lord who firmly believes in democracy. All eight members of his army have equal say in the path they will ultimately follow: One person, one vote. 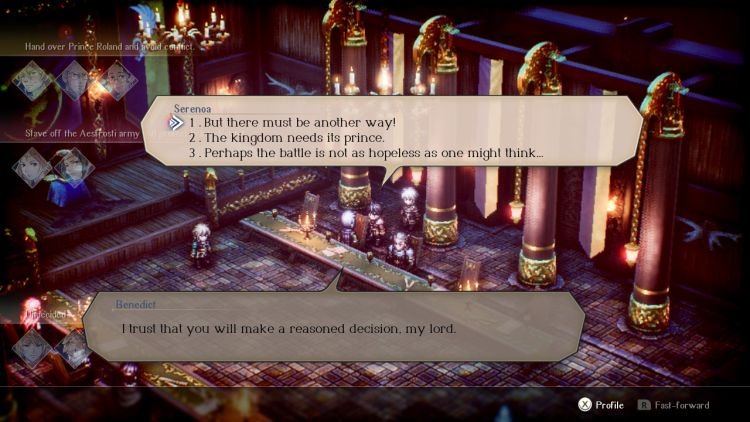 The party is initially divided but leans toward saving the town by turning over the prince by a four-to-two count, with one voter undecided. Hughette, a member of the Glenbrook Kingsguard, firmly plans to cast her vote to fight. Aesfrost’s archduke beheaded her liege, and she can’t conceive of a world where she allows the prince to meet the same fate. Conversely, the pragmatic steward Benedict believes Lord Serenoa’s duty is to his people, and he counsels against waging war. As Serenoa, I had one goal: Troll the army by persuading people on both sides that the other was right.

Project Triangle Strategy gives players time to talk to everyone and uncover valuable information that can be used to form a compelling argument. By visiting people in town, I uncovered a secret stash of oil that could turn the stream running through its center into a wall of flames. It would burn the homes but give the army a chance in the battle ahead. Armed with that information, I was able to win Benedict over to Team Fight. At the same time, I told Hughette that we stood no chance at victory and that a lord’s duty is to his subjects above all else. She wasn’t entirely sold, but it was enough to shake her confidence and leave her undecided. 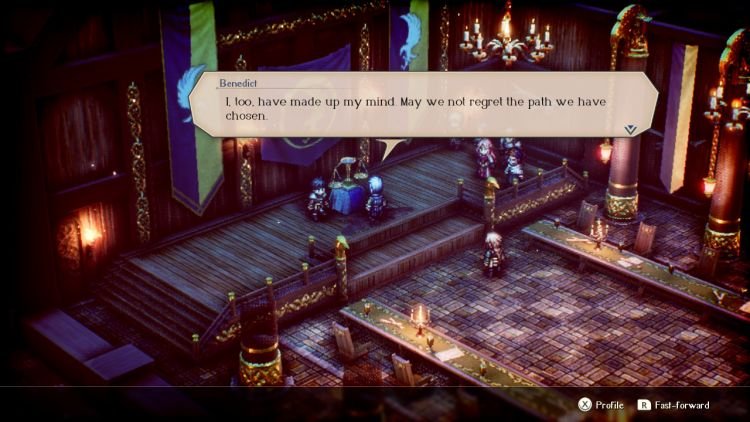 When Serenoa brought out the Scales of Conviction to tally the votes, I had no idea what the result would be. Every single voter was listed as undecided. I cast the first vote, and Roland was relieved to learn I voted to protect him. A very confused Hughette was enraged by my duplicity, shouting “What is the meaning of this?!” when it was her turn to weigh in. Ultimately, the verdict was clear. Team Fight won 7-1, with the cynical spy Anna being the only Team Turn Over holdout. 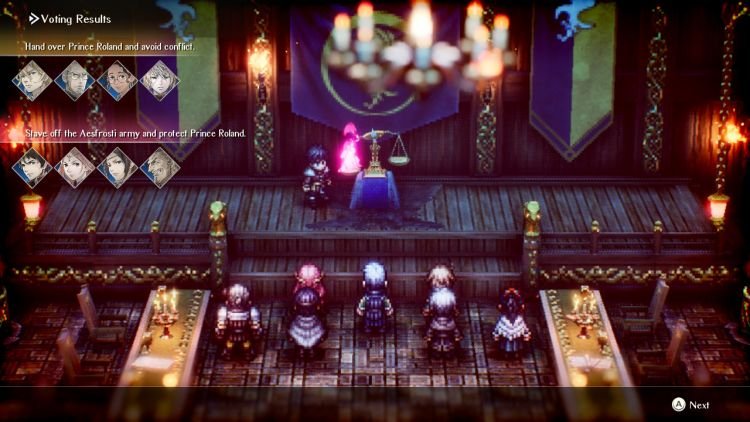 I reran the simulation to see what happens in the case of a tie; The player breaks it.

Games marketed around player choice miss the mark all too often by making those choices insignificant to the story overall, but the scenario involving Prince Roland gives me hope that Project Triangle Strategy won’t. Just for fun, I reran the vote after swaying the party to turn the prince over. Instead of fending off the Aesfrost army, I was sent by a now captive Roland to put down the only noble house that refused to bend the knee to the archduke. Reactions from across the continent were dramatically different depending on the path I chose, revealing political intrigue that I didn’t sense after playing the Fight route alone. Deciding to hand the crown prince, who happens to be one of the strongest party members, to the enemy is the type of decision that has the power to completely rewrite the game’s events beyond just one chapter.

The Scales of Conviction make Project Triangle Strategy stand out from other tactics RPGs, but its tone, gameplay, and visuals hooked me as well. Final Fantasy Tactics seems to be the game everyone is comparing it to, but Fire Emblem is my closest touchpoint. 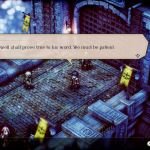 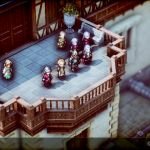 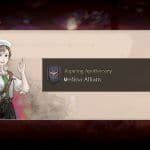 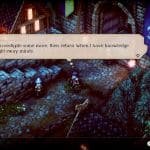 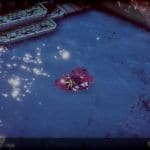 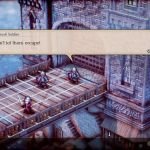 Project Triangle Strategy feels like a Fire Emblem game that takes itself seriously. Fire Emblem: Three Houses may deal with deep themes, but its characters are generally light-hearted. Its world is full of whimsy, and that tone pervades through each stylistic choice. Characters like the chocolate loving-Lysithea and the obnoxious noble Ferdinand Von Aegir don’t exist in Project Triangle Strategy. These characters would fit better in Westeros than Fodlan, constantly worrying about walking a righteous path, surviving each day, or preventing society from collapsing.

Characters that take themselves seriously require serious writing. There’s an inherent challenge in striking that tone without feeling cheesy in a game where characters ride warbirds, cast walls of ice, and put enemies to sleep by stabbing them with a dagger. (That’s counting sheep sleep, not eternal slumber dead sleep.) That’s not to say the team at Square isn’t up to the task. It’s hard to judge how successful they will be based on the demo because there’s no time to get to know the characters. I can judge the voice acting, however, and that’s pretty subpar. Poor voice work appears to be becoming a trend with Square games. (I’m looking at you, Bravely Default II.) Fortunately, there’s plenty of time to polish it up with the game set to release in 2022. 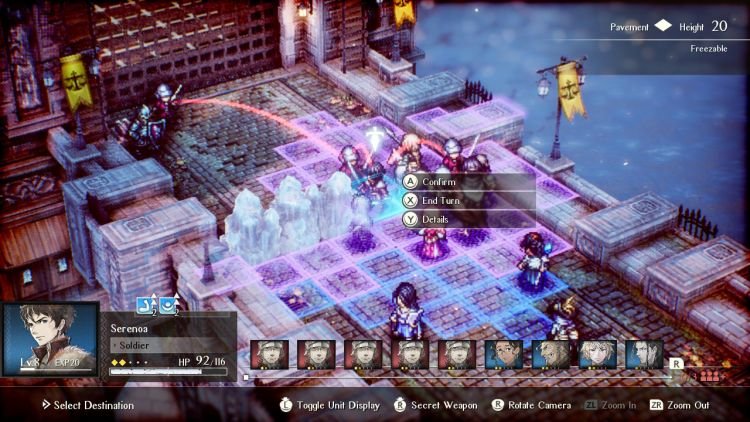 The action can get a bit too crowded

Given that faraway release window, Project Triangle Strategy’s bread-and-butter tactical RPG combat feels shockingly complete. Every ally has unique combat skills that allow for creative approaches to battles. The pragmatic Benedict may not be able to deal massive damage with his cane sword, but he can boost ally stats and even give them an immediate turn. The ice mage Corentin – some of the names in this game are as ridiculous as its working title – can cast attacking spells, but I got more mileage off his Ice Wall ability, which provides a makeshift barricade on open terrain. Everything that you’d expect from a tactical RPG is here and well-executed. 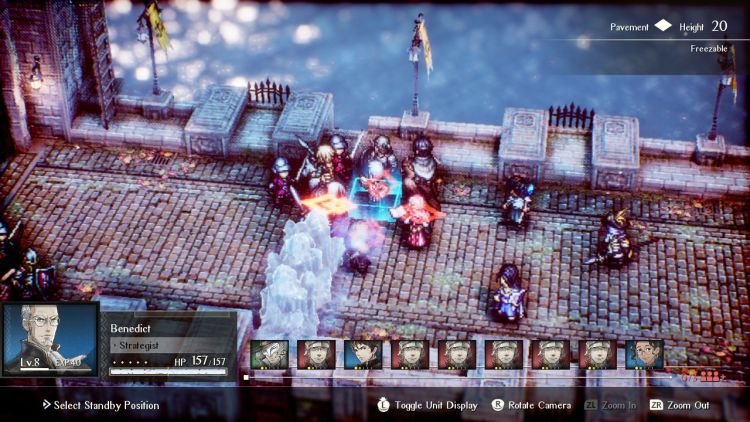 Like Octopath Traveler and Bravely Default II, Project Triangle Strategy’s demo does highlight a few areas that need improvement. Its HD-2D pixel art looks beautiful in places but lacks a certain vibrancy, and its made worse by frequent performance dips in handheld mode. Players have full control of the camera in battles, but I had a really hard time getting angles that let me take in the entire battlefield. The game’s turn order display is crowded and hard to read. Planning moves is nearly impossible because enemies of the same class all have the same portrait, so you never know who will attack next.

Flaws aside, Project Triangle Strategy is a project brimming with potential. The Scales of Conviction mechanic may require a little fine tuning to remain engaging throughout what presumably will be a 50+ hour campaign, but it certainly made a great impression in the demo. I can’t wait to shake my party members to their core by constantly poking holes in their ideals when the game launches in full next year.