20XX gave us a roguelike-style Mega Man X game, and it was so good that they just had to make another! 30XX is the follow-up to it and changes things up quite a bit! I was fortunate enough to check out the Pre-Alpha build of it last year and this year, in addition to the Early Access build that hits Steam on February 17! So, what are my impressions of this title, which is still in development?

Like its predecessor, 30XX is a roguelike game inspired by Capcom’s Mega Man X franchise. Nina returns alongside Ace as playable characters in this new installment.

One thing fans of the series will notice right off the bat is that the graphic style has SIGNIFICANTLY changed. In 20XX, you had these hi-res characters and colorful worlds but here in 30XX, it has gone the more traditional pixel art route that adds a certain nostalgic yet gritty tone to the series all while maintaining the vibrance that the first game was known for. 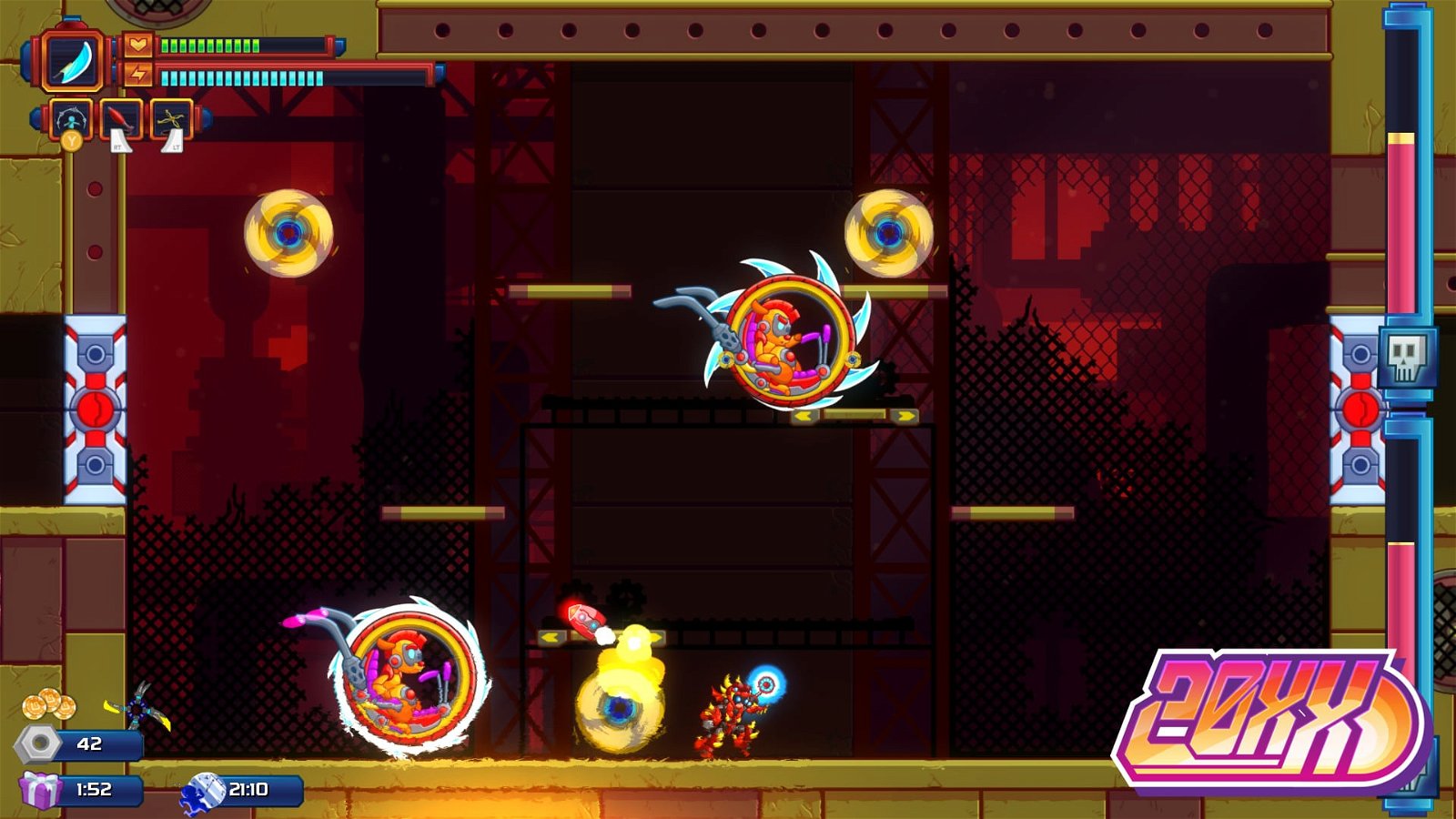 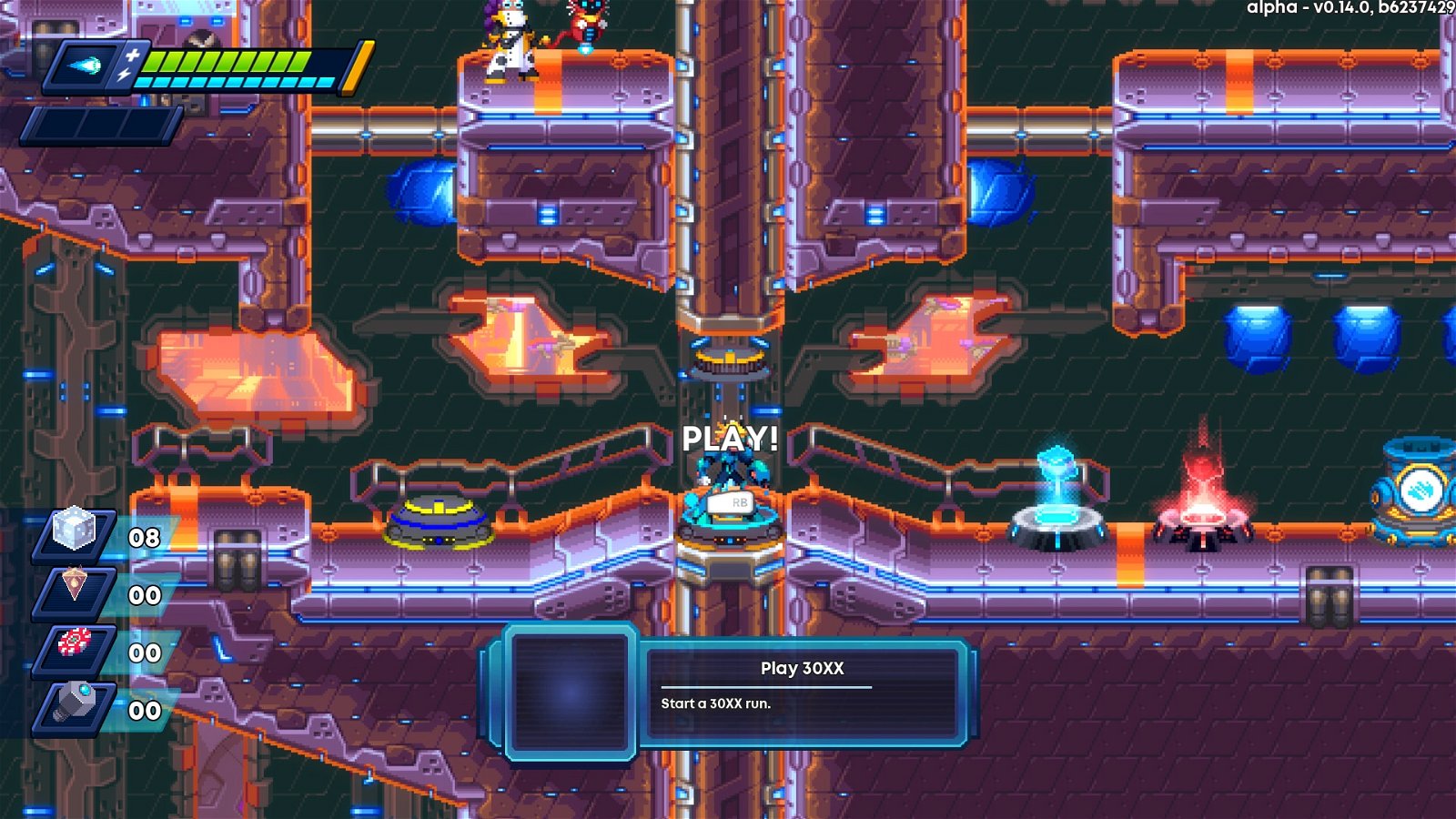 The game is much like its predecessor as well in terms of how you will tackle it. You are dropped into your home base where you can choose to start a run, do co-op, switch between Nina and Ace, or visit a couple of transporters that will give you access to power-ups or the ability to adjust the difficulty by tuning different factors of the game including things such as spikes and pitfalls dealing more damage, bosses having more health, etc. 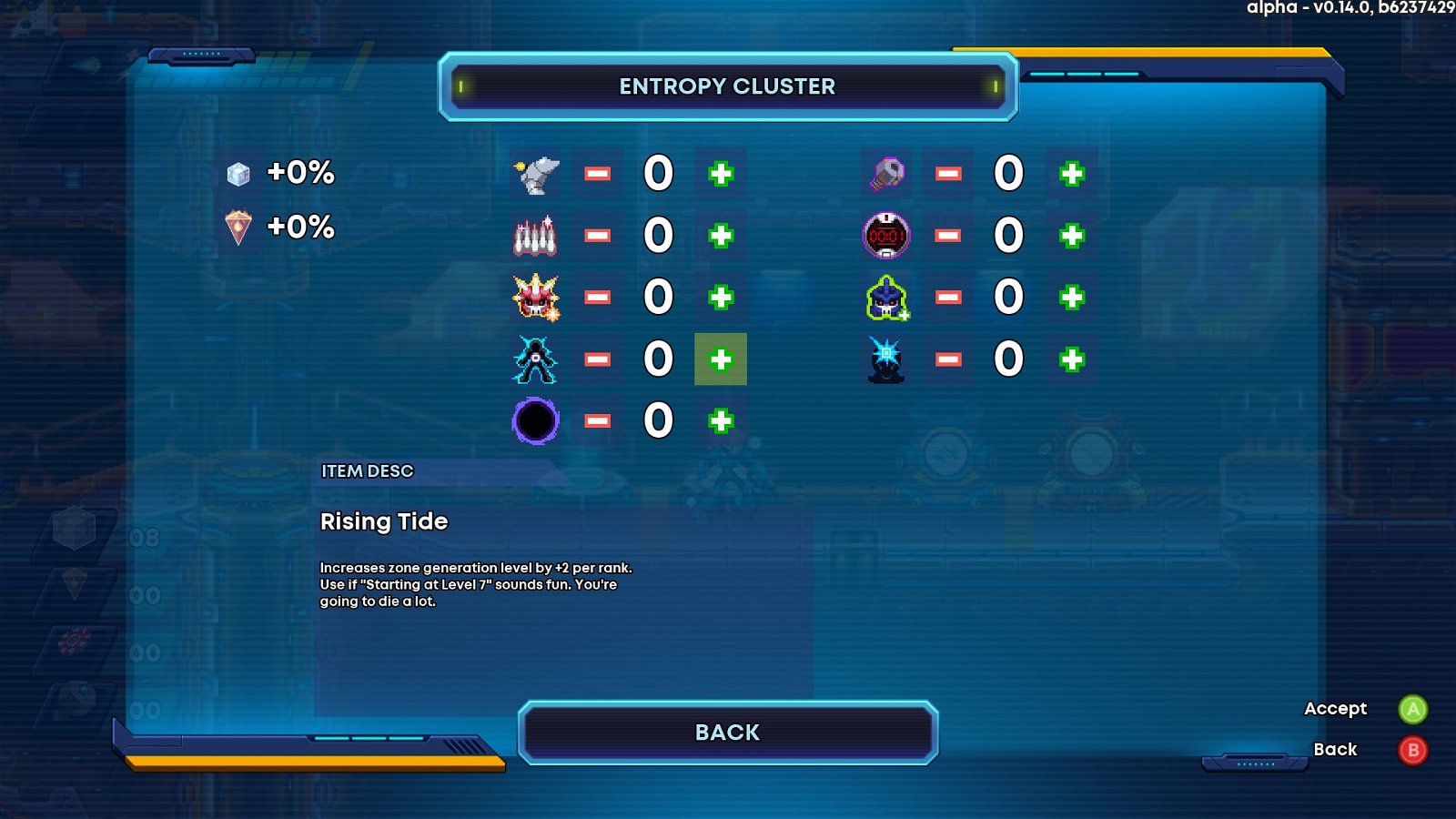 The Entropy System lets you customize your 30XX experience.

Once you’re ready to start a run, jump right in, and the game will pick one of the six available stages for you to play. Here, it’s the standard fair of jumping and shooting (or jumping and slashing if you’re Ace) your way through different randomized tilesets, avoiding pitfalls, and killing enemies. Depending on the stage, you can also enter Glory Zones for chances at power-ups or take on enemy challenges for more rewards. Sometimes, you’ll end up with both in a single stage, other times, you may not. That’s the nice thing about 30XX is that just like 20XX, it’s different each time you start a run!

Quite a few stages have a mid-boss for you to tackle before going into its second half. The second half of a stage usually puts you to the test and contains some of the levels more complex puzzles and a higher difficulty, all topped off with innovative boss fights.

Gone are the days where you just enter a boss room and go one-on-one with the level’s main enemy. There are some twists such as Hoot Omega having a randomized stage you have to chase him through, Absolution who disappears forcing you to go through a set of mini-challenges before bringing him back into combat, and Lethal Tempo, which consists of four gears that let you kill them in any order, thus customizing your experience during that fight.

Of course, going through the game with one life, collecting currencies to enhance your next run, and all the like are the bread and butter of the game but it’s not the only thing to do this time around. 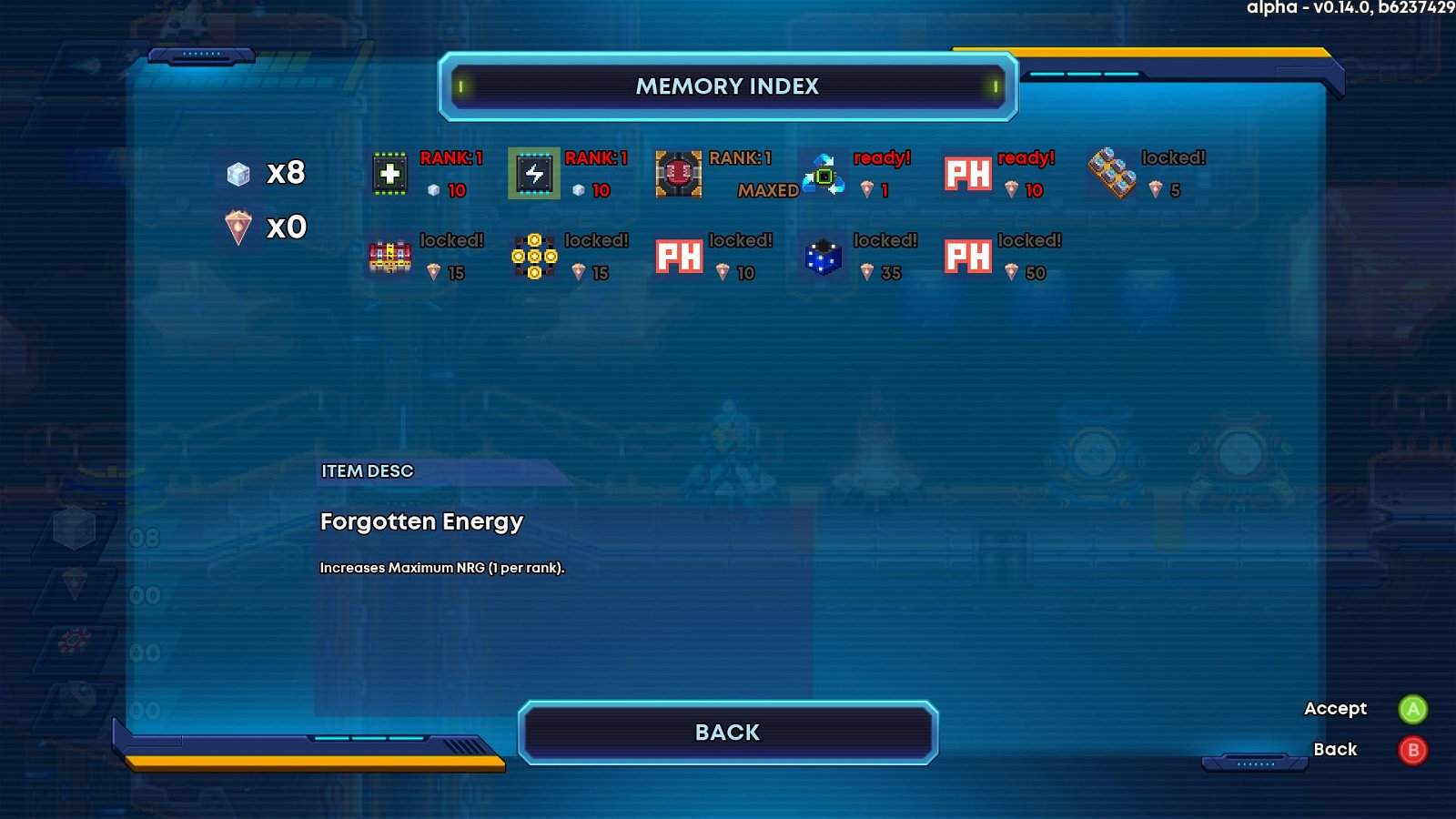 While 20XX tried to switch things up by offering daily and weekly challenges, 30XX spices things up with Mega Mode and a Level Creator!

Mega Mode is for those who want to just beat 30XX. If you die, you get sent back to the base to try the level over again, but you don’t lose any progress as if you were playing in standard mode. The game is still randomly generated in this mode and offers a more casual experience or a more relaxed experience if you decide that you just want to chill and enjoy playing the game. 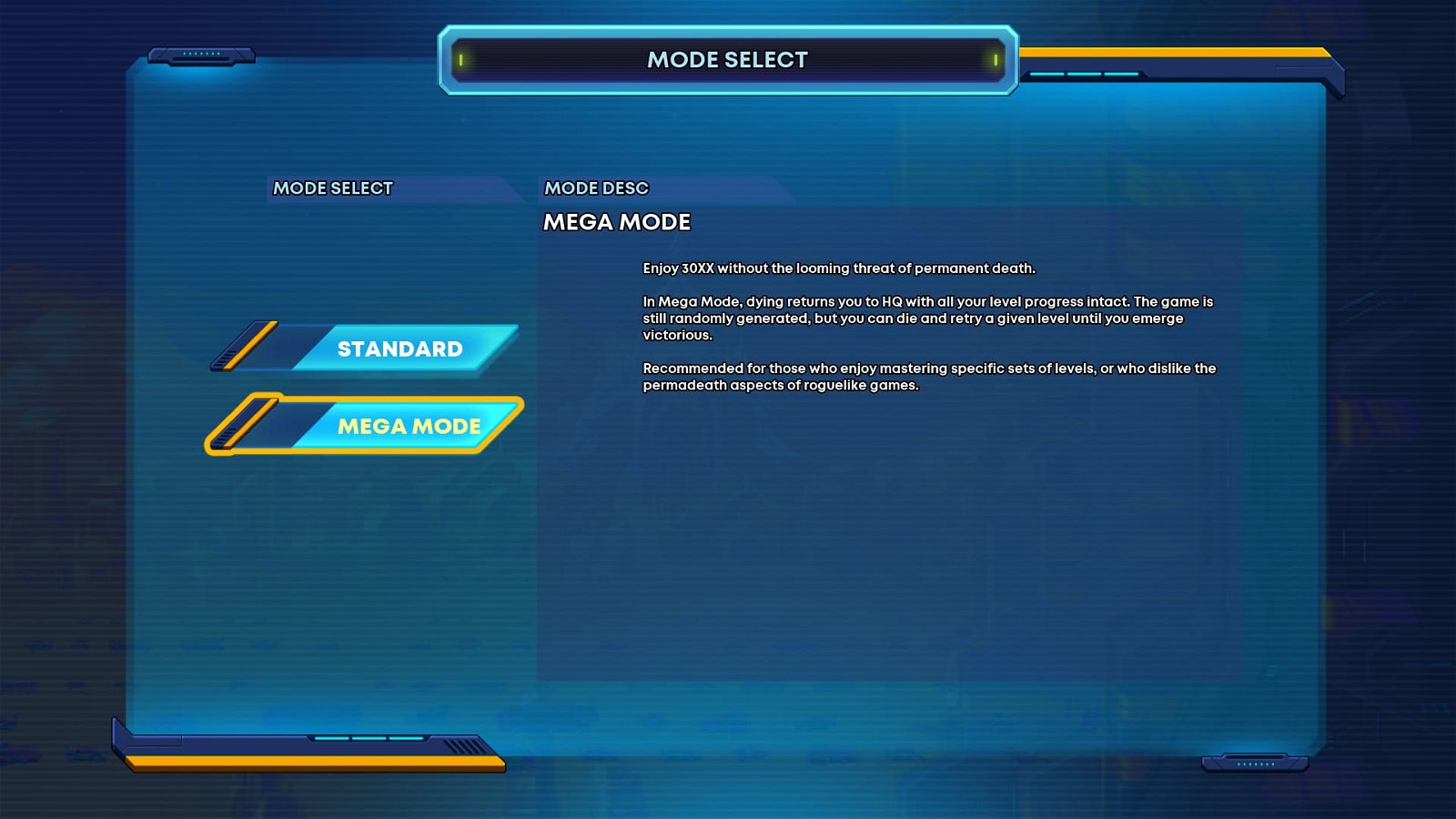 Start a run in Mega Mode and leave all that stress behind!

The Level Creator is a bit unique. Created by WreckingProgams (who also created the Mega Man game engine for indie creators as well as the smash-hit Mega Man Maker), it allows you to create your own levels and upload them so the community can play and enjoy them, thus adding infinite content to the game.

You will need to create an account to use the level editor, and the email appears to be automatically going to your spam folder, so make sure to check that. Also, there is a bit of a delay in getting the confirmation email, so sit tight and don’t worry. Before checking my spam, over 30 minutes passed, and the verification code was still good, so there is plenty of time to check and get things squared away.

Once you’re inside, you can play other people’s chunks or create your own. Here is a video giving off a bit of a demonstration.

Just to note… the graphics here look really funky, but that is not the fault of 30XX. The game is actually fine; however, Open Broadcasting Software (which I used to capture my gameplay) somehow doesn’t like the Chunk Creator and doesn’t display it correctly.

One thing that is a bit of a bother is that the Chunk Creator pops up in its own window rather than just being within the game itself. Maybe that will be something that will change with the final retail release of the game? Everything is integrated with Mega Man Maker, so there is a possibility that it will end up the same way with 30XX.

Even in its unfinished state, the game is extremely fun and entertaining to play. While I can’t sing its praises enough, there are a few things that do stand out that I will call attention to. Before anyone screams, “BUT IT’S ALPHA AND NOT FINISHED,” I’m more than fully aware of that so keep those pants on, buttercup.

Unlike 20XX, it simply sends you to another stage at random when you defeat a boss versus letting you choose from three randomized stages. Given the fact that only six stages are in, the ability to choose your path may just not be implemented yet.

Next is the music. This is going to be an odd “complaint” as those who are experiencing Early Access for the first time will sit there and scratch their heads when reading this because it will be the first time they’ve ever heard the music for themselves; however, between the early days of Pre-Alpha up to the very last build before Early Access, the soundtrack was hard-hitting and quite raw. I loved many of the themes, and it really made me wish I had the OST even though the game wasn’t near being finished yet.

With the Early Access build… not so much. Some of the themes were changed for the better or for worse. For example, each boss now has their own unique theme, and Absolution’s is my absolute favorite… which wouldn’t have been the case if they hadn’t toned down Hoot Omega’s battle theme. I’m a huge rock/metal fan and having a raw remix of his stage theme was great, but by the time I killed the boss, the good part was just coming in when it was right there in your face soon after starting the fight in a previous build.

Also, not a fan of Echobeast’s new stage theme. I feel it’s a lot softer than its previous theme. Lethal Tempo’s stage theme as well as Zen Primus’ also seemed to go through a slight softening process. I feel that some of these new themes are missing the punch the pre-alpha versions had.

Again, people playing this for the first time will have no clue what I’m talking about, so this just comes off as a personal nitpick, but I hope a few of these themes get reverted or… at the very least… include them as bonus tracks in the OST. They were too good to be left out!!

Next up is the difficulty. There seems to be a huge variance of it between stages. For example, let’s take Hoot Omega’s stage. The video below sees me just blowing through the stage with reckless abandon; however, Legacy’s stage (Deepverse) REALLY dials up the difficulty, even if it’s the first stage you come across. It’s a frustrating imbalance that I am more than positive will get adjusted as we get closer to launch (they already had to nerf the mid-boss in Deepverse), but as of now, there is a big power swing between stages like Hoot Omega and Zen Primus vs. ones like Legacy’s and Absolution’s.

Even with its unfinished state, there is a lot to do in the game. One of the things I love is the inclusion of Ace right off the bat. If you’re sick of running and gunning and want to have a fresh, new approach, consider trying Ace out as his projectiles, and melee attacks (especially when combined) can rack up some nasty damage!

Outside of those little nitpicks, which, again, will most likely get fixed and adjusted… 30XX is shaping up to be another amazing game. I find myself jumping on to do a run or two almost every single day. If you are a fan of Mega Man X or have even played 20XX, do whatever you can to check out the Early Access for this title!

You will not regret it!