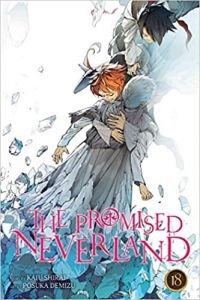 In volume eighteen of The Promised Neverland, Ray and Emma reunite with Norman but he reveals that they are too late. The entire royal family and Geelan’s clan have all been eradicated. Norman states that there is no turning back now but through a convenient Talk no Jutsu from Emma, Norman changes his mind. Right when they’re about to decide what to do next, the Queen revives. Zazie takes one for the team before Sonju and Mujika show up to help. We learn a little bit about Sonju’s pas here but we also discover that the Queen has two cores which is how she was able to revive herself.

However, the Queen made a fatal mistake during her regeneration. She consumes all the bodies, even those who had died from the poison, to rebuild her body. Her cells were going into overdrive from the process and she, essentially, just died on her own. That was a bit of an anti-climatic ending for her but at least she’s dead for good (unless her real last name is Aizen).

With everything settled, there is one last big bad to deal with… the head of the Ratri clan. They figure that he’s heading to their base and, as usual, Norman was correct in his assumption. By the time they get back, they realize that they were too late. Peter Ratri has taken everyone there at the base to Grace Field House.

After so many volumes away… it’s time to return to where it all began!

One of the common threads that I see in manga is how the story handles itself as it gets closer and closer to the end. So many times do I see manga authors fall into the same trap over and over again. They use their series to build up these great stories and then when it’s time to bring things to a close, they come up with hard turn solutions that just don’t seem plausible. There were a couple in this volume that bothered me… such as Norman’s change of mind and the Queen’s death… which I felt hurt the story a bit. Plus, Sonju’s backstory seemed pretty abrupt as there were no hints or clues leading up to it.

I’m hoping we don’t get more of this for the final two volumes… however… more on that in Final Thoughts.

Norman’s personality change was way too easy to pull off. Knowing how smart he is, I would have put money on the fact that it was all a ploy to manipulate Emma since he knows that she’s pretty gullible sometimes. Norman spent two years crafting his master plan… set everything up… pulled it off… and suddenly just changes his mind due to one talk with next to no resistance? It seemed a little too convenient and too easily resolved. Needless to say, I wasn’t really a fan of it.

The other development in this volume belonged to Sonju. The series simply threw a backstory on him as the Prince and the Queen’s younger brother. It felt out of left field and something just slapped together at the last minute for some shock value. Personally, I think that should have been something that could have been revealed much earlier that Emma and Ray could have taken advantage of. His thirst for revenge, knowledge of the royal family… all of it could have shaped their plans. Plus, knowing that Sonju would be going to confront his sister could have made for a better buildup and generated more anticipation for their encounter in this volume. Instead, it just felt rushed and like a plot point being slapped onto his character in an attempt to make things interesting.

For the first time in a while, I have to say that this was one of the weaker volumes of The Promised Neverland. It could have been so much better if Sonju’s backstory had already been established if Norman’s decision to change his mind didn’t come after Emma’s basic “we’re family” speech, and if the Queen didn’t just flop over and die due to a plot device.

Imagine how much better this would have been if we all knew that Sonju was the Prince and he had this epic and glorious battle with his sister! A true fight to the death that tested the two of them and pushed each other to their limits. Giving Sonju the final blow against her would have brought a much more satisfying conclusion along with a big justification for Sonju’s own personal revenge.

As for Norman… I don’t think he should have changed his mind. How much more interesting would it have been if Norman was revealed to be doing Peter Ratri’s bidding all along for the same reasons stated in this volume about the Lambda Experiments? What if he actually agreed with Ratri all along and this was part of a grander scheme? Sure, it would probably take more than the two remaining volumes to explain and flesh out, and while I am no editor at Shueisha and couldn’t tell you if 20 was the planned stop for the series but I think there was so much wasted potential here.

At this point, this feels as if the series is being rushed to a conclusion and that’s a big problem with a lot of series today. I understand how the system works in Japan. If you’re popular… you get serialized… if you stay popular… you continue to be serialized. If there are more popular series that need to get inserted into the magazine and your popularity is suffering then… well… you’re not serialized anymore. So many great stories with so much potential end up getting rushed to a conclusion because of this system which is quite sad.

Again, I don’t know if that’s the case here with The Promised Neverland but it sure seems very familiar based on other series that I have read. We have two more volumes to find out if that is truly the case. I hope it’s not.

This item was provided for review by VIZ Media.