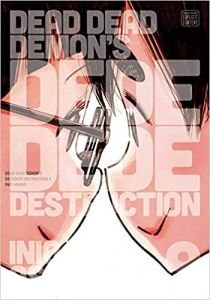 The ninth volume of Dead Dead Demon’s Dededede Destruction continues Oran and Kadode’s story in the alternate timeline. Here, Kadode is getting more used to using the invader’s pen and causing havoc and destruction with it. In fact, her entire mental state begins to change and she wishes to purge the world of evil people. Kadode then goes on a bit of a killing spree with the pen but the guilt becomes too much for her.

The events that follow cause Oran to have a chat with the invader about a possible solution. Here, it is explained how Oran becomes a time traveler which brings us back to the current present after we replay some of the events from the beginning of the series to drive home the fact that this timeline is simply a redo for Oran.

I know that’s a shorter summary that I usually do for a story section; however, that is all that really happened in this volume… or at least… all that I am willing to talk about without spoiling a lot. There were some pretty impactful moments throughout the story here and a lot of it ties things together and makes sense of the recent events. It was also interesting to see the differences between the two timelines and how everything in the series, so far, loops back to one singular point… a point that becomes a heavy burden.

The effects of that burden; however, close out this volume in a pretty stark cliffhanger. I am not sure which way it’s going to go; however, a single image finishes this volume in a profound way as it is the result of all 8 previous volumes and the circumstances leading up to this moment. I’ll just say it once again that Inio Asano proved why he is my favorite mangaka with this volume!

Related:  Love Me, Love Me Not Vol. 6 Review

You would think that this volume was all about Kadode and, in a way, it is; however, this volume is actually about Oran. When you realize that this is an alternate timeline, nothing Kadode says and does matters; however, at the same time, it does. Because without Kadode doing the things that she did, Oran wouldn’t have had a need to redo her life. By redoing it, the Kadode we knew in the timeline no longer matters. The Kadode we’ve known from the beginning of the series does. It’s weird to kind of phrase it like that but, hopefully, you understand what I’m trying to say.

All of it circles back and falls on Oran. Every action of Kadode’s influenced every action of Oran’s. Oran is living for Kadode and this redo is all for her sake. It really showed the strength of their bond for one another if Oran is willing to go this far for her. The dark side is the mental impact that all of this is having on her. Subconsciously, she knows everything and I wasn’t really sure if it was an act where she was pretending not to know but that ending scene in this volume says otherwise.

Inio Asano loves to dive deep into the dark side of people’s minds. He certainly has no shame in expressing the grittier sides of life and he is, once again, doing that with Oran. Maybe not to the degree that he did with Punpun but you kind of get that vibe here. It makes me wonder if Oran is going to drop the façade in a future volume or if this is just a temporary lapse for her?

Last review, I said that this volume would finish fleshing out the time travel explanation and it did. I said that we would see how it would apply to the main story… and we did. However, now we are awaiting the results of that application. While the pacing remained slow, it was done with good purpose. There were some pretty impactful and dramatic moments here that really tied a lot of things together.

I admit that the whole time travel aspect was a bit odd and out of left field but when it comes to Asano, nothing should be unexpected. This series did have a sci-fi element from the very beginning so throwing in some time travel doesn’t really feel out of place. I’m just happy that they are only sticking to two timelines rather than using it as a plot device to solve all of the problems in the world. I would actually be disappointed if that became the central part of this story because then it would mean that nothing would matter if things just looped over and over again.

Regardless, we have to see what happens in Volume 10 to fully understand the significance of this little side trip. Also, we still have the mother ship that’s ready to explode at a moment’s notice, too. Perhaps time travel will become the answer after all? I hope not and knowing Asano, it probably won’t. He loves bleak stuff so I hope I’m correct in assuming that we will just continue to press forward with what we have now!

This item was provided for review by VIZ Media