When a developer decides to make a VR game, they have to ask themselves one simple question, “Why does this game need to be VR?” I am fairly confident that no one at Respawn or EA even considered this question let alone had an answer for it. This is certainly not the triumphant return to the series fans were hoping for.

Medal of Honor has had quite a mixed history; back in its heyday, it was a direct competitor to Call of Duty, and to be honest, some of the games were even better than Call of Duty. It wasn’t until the days of the PS3 and Xbox 360 where Medal of Honor started to lose some steam with some laughably bad choices, which has caused the series to go dark for 8 years, if you have been waiting 8 years for a new Medal of Honor game I hate to break it to you but…you’re better waiting a little longer.

I have a massive amount of respect for Respawn Entertainment. They have made some of my favourite games, such as Titanfall 2, Jedi Fallen Order, and Apex Legends. When you play a Respawn game, you can feel the passion and the care that the developers put into their mechanics and gameplay. Still, that feeling is completely absent in Medal of Honor: Above and Beyond to the point where it honestly feels like another studio made this. 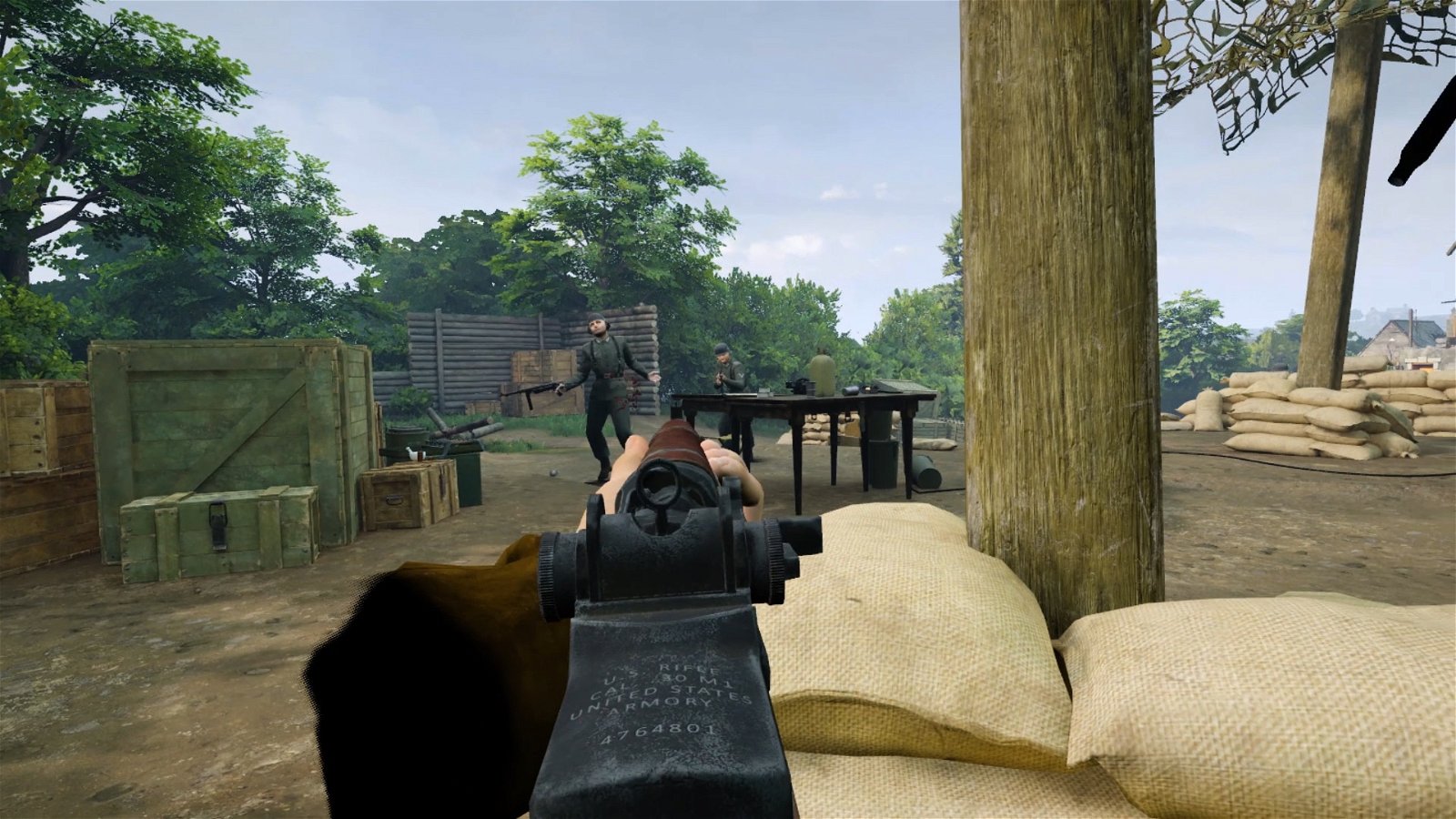 The first thing I need to mention regarding Medal of Honor is that the game is poorly optimized. My PC isn’t a monster rig, but my specs are much higher than the recommended specs, and yet this game is stuttering in certain missions like a PlayStation 1 game. The stuttering is so bad that it has made me sick, literally sick. I have played VR titles for about 4 years now, and I have never been physically sick while playing a game before. A certain mission dials up the sickness to the max with not only having you on a moving vehicle that you have no control over, but that vehicle is also going full speed while the game is stuttering out of it’s god damn mind. Who ever thought this was a good idea really needs to re-evaluate their career choices.

To get back to the specs for a moment, allow me to show you the minimum specs for this game:

And allow me to show you the minimum specifications for Half-Life: Alyx:

After playing through and reviewing both games, I honestly cannot tell you why in any capacity Medal of Honor requires almost double the specifications of a game that is superior in graphics, gameplay, spectacle, and every other aspect that matters.

Another fatal failing of Medal of Honor is that almost all the weapons have iron sights rather than any kind of scope or even a reticle, so aiming becomes a game in itself because you are trying to not smack yourself in the god damn face while also fighting with the gun itself because your dominant hand is glitching through your field of view for some reason. VR headsets are currently not at the technological point where using iron sights is remotely viable, I love my Rift S but saying that things get bury when they’re close is an understatement. Maybe the Valve Index doesn’t have this issue, but the average consumer doesn’t have around £1800 lying around for both the headset and the required graphics card to run this. I would understand the omission of a reticle on the screen if the game was going for a more realistic feel, but Medal of Honor appears to be going for a more arcade feel with enemies having “power levels” above their head, and characters cracking terrible jokes every minute or so.

Related  Capcom Arcade Stadium Heads To PS4, Xbox One and Steam On May 25 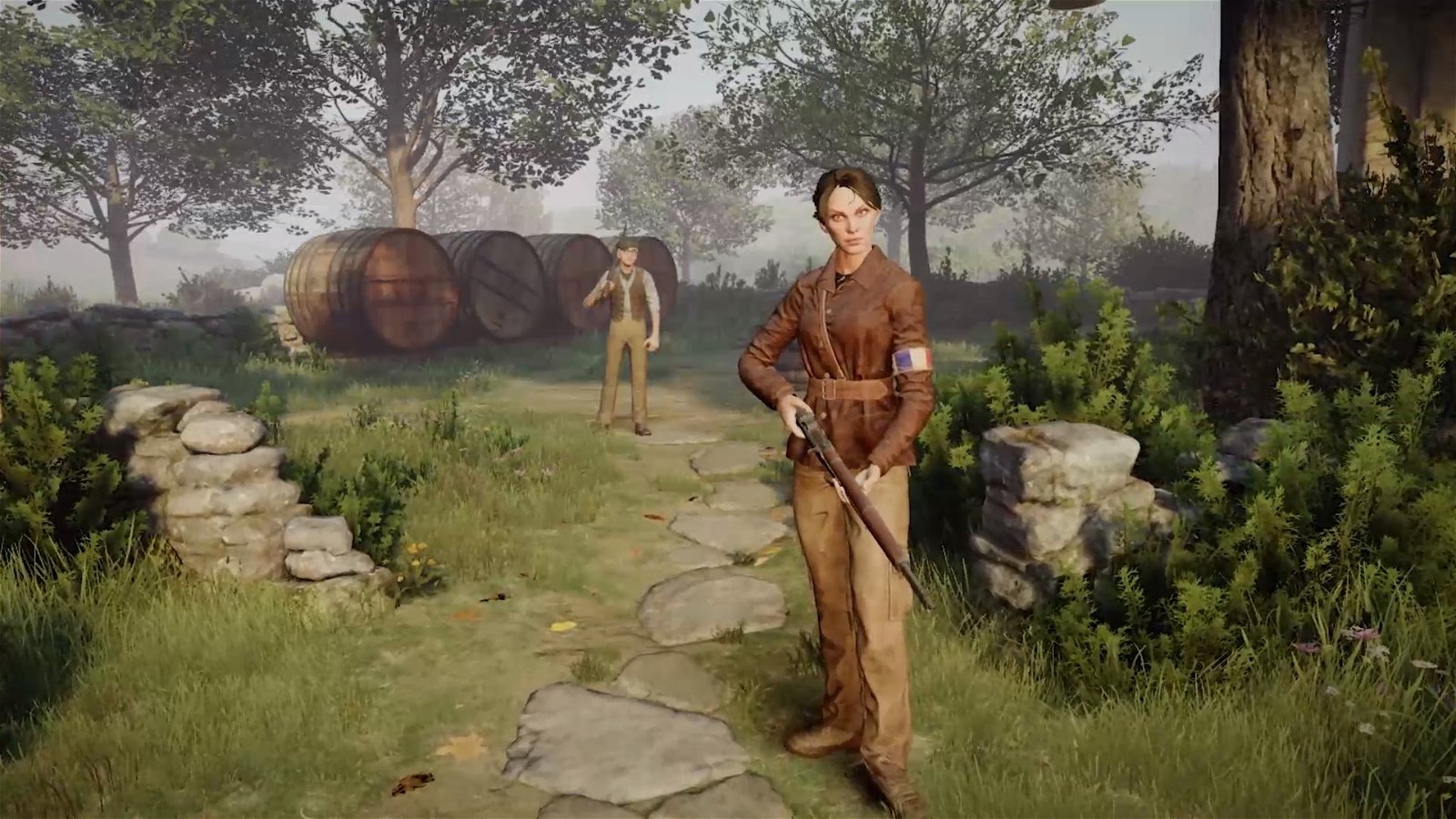 One positive you could place on Medal of Honor: Above and Beyond is that the story is around 10 hours long, which is longer than your average first-person shooter on any platform these days. To put it into perspective, Call of Duty: Cold War is between 5 to 8 hours long, so it is impressive that Respawn managed to get 10 hours of story into a VR game published by the very company that said single player games are dying out, also known as EA. But, once again, there are problems with the campaign.

To start with, each mission is laughably short, with transitions between areas being cut to black with no exploration from the player. For example, one of the earlier missions has you traveling to Paris to meet up with the resistance, and this is how the mission goes; you start on a boat where you can’t move or interact with anything. All you can do is listen to the NPCs talk at you while waiting for a lighthouse to blow up. After this scene is completed, you fade to black, and one loading screen later, you’re on the cliff where you have to eliminate the incoming Nazi forces, which also takes less than a minute. Once you’ve eliminated the Nazis, you fade to black once again so the game can move you to the designated cut scene location where characters can talk at you once again, which goes on for another minute. Then once AGAIN, you fade to black to see a victory screen (Respawn have since patched out the victory screen between normal missions and now it only appears at the end of a chapter but you still fade to black at the end of a mission). That is a play by play of a single mission. Every mission in Medal of Honor plays out like that. I swear that every now and again, I was under the impression that I was being messed with and that I was going to load into Skyrim with the words “Hey you, you’re finally awake” slipping into my head. 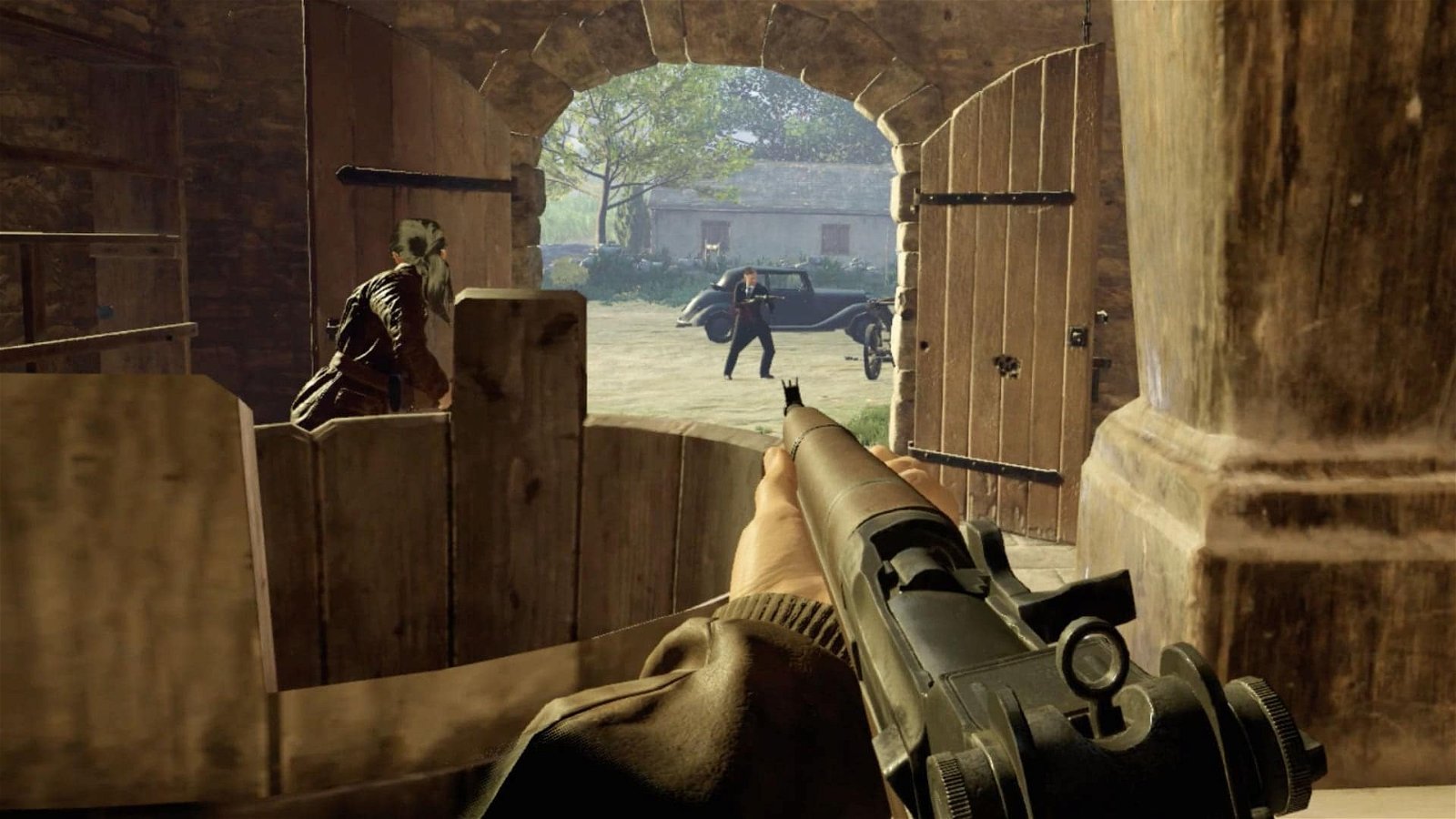 I have never seen a game misunderstand it’s medium more than Medal of Honor. Do you know how a developer that understood VR would handle this mission? They would have you start on the boat and let you walk around so you can get your bearings, and instead of teleporting you up the cliff, you would need to climb it either by scrambling your way up the cliff face or by making your way around, once up there you can engage with the Nazi forces. Once the combat has subsided, your team joins up with you, and then you could make your way over to the designated cut scene point where you can move around while listening to the dialogue. Cutting to black every minute is a terrible way to progress things in a VR game because you ARE IN THE GAME. Nothing will disconnect from an experience more than going blind every minute or so and waking up in another location, unless the game is an alcoholic simulator or something like that.

It’s not like that it’s worth sticking with the horrible mission structure to get to the story because it isn’t that good either. It’s as typical as a World War 2 story can get to the point where I can say, “watch x movie, and you’ll know the whole story.” Plus, every character is a bloody comedian with a standard conversation going like this:

“You were supposed to do the thing!”

*something falls over in the background*

“Maybe I forgot to do the thing.”

*they stare at each other in silence*

I’m not averse to comedy in games or even characters making light of a horrific situation, but when every character is trying to crack a joke every five minutes, it’s just sad. None of this is helped by the atrocious voice acting either with each character hamming it up as a west end reject. The mouldy cherry on top of this shit flavoured cake is that the audio balancing is completely off with certain voice lines being boomed in your ear and others being harder to hear than a pin dropping in the middle of a thunderstorm. I honestly fail to understand how many triple-A developers fail to understand this utterly basic concept, time and time again. In a normal game, sound issues are annoying, but it can make the experience unplayable in a VR game. 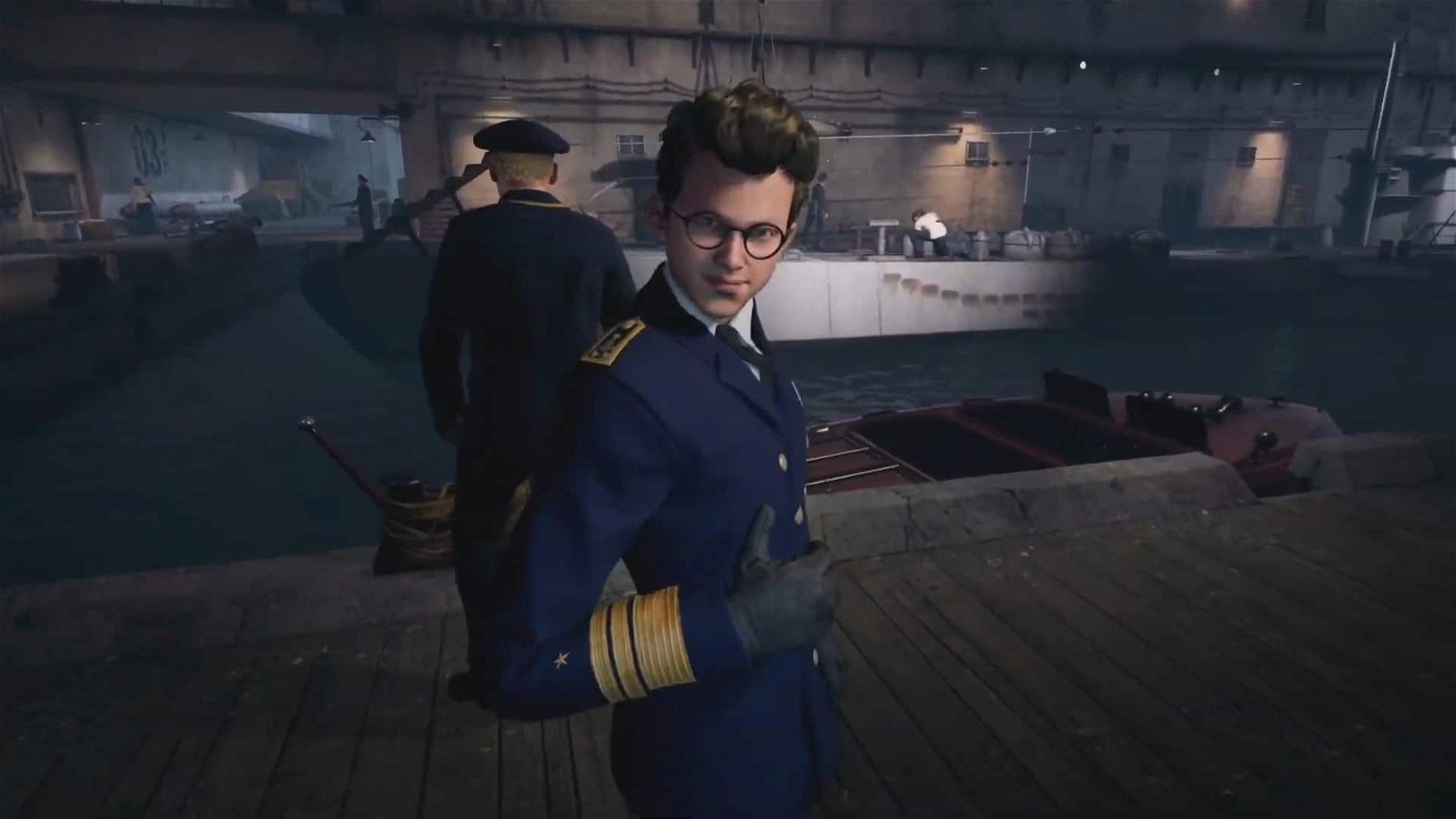 Now that I’ve covered the story and general flaws of the game, I’d like to divert to the gameplay side of Medal of Honor; ignoring the aforementioned iron sights issue and stuttering, the core gameplay of Medal of Honor is what you would expect and the shooting is satisfying and done quite well in VR. A lot of VR games make the mistake of trying to emulate recoil when it comes to shooting, and like many things, when it comes to VR, the technology isn’t there yet to make it feel satisfying. Instead, Medal of Honor opts to have bullets veer off target if you are shooting out of your range, which is a system I personally prefer.

Regarding movement, you have the standard settings of free movement and teleportation, which should be VR standard now, and I’m happy that more devs are embracing locomotion in their games. When this game came out, I have to mention that smooth turning wasn’t available, which annoyed many early players. This has since been patched in, so I won’t dwell on it too much but not including it at the start is an odd choice.

When it comes to the full rang of gameplay available in Medal of Honor, nothing really highlights the VR aspect. Your entire experience is just going to point A and kill your way to point B. Nothing about Medal of Honor really utilizes the full motion of control that a VR user has; for example, Half-Life: Alyx has several puzzles and traversal methods based around the freedom of motion, whereas Medal of Honor has none of this. To really measure the worth of a VR game, you need to ask yourself, “Will removing VR make this game worse?” in the case of great VR titles like Half-Life: Alyx, Blood and Truth, Gorn, Blade and Sorcery, and The Walking Dead Saints and Sinners the answer is yes but Medal of Honor is one of the few occasions where removing VR would actually make the game better.

As a whole, I have to say I’m thoroughly disappointed with Medal of Honor: Above and Beyond. Never before have I seen a developer completely misunderstand the medium they are working with more thoroughly than Respawn has here. To top it off, Respawn had every advantage when it came to developing this game because they worked directly with Oculus. The latter has produced and overseen multiple successful VR titles during their time as a VR provider. Hence, I utterly fail to understand why anyone thought this was worth releasing, let alone charging £54.99 for it!

I haven’t mentioned the multiplayer, so all I’ll say is this, if you want a multiplayer, VR, first-person shooter that has great gameplay ad doesn’t have laughably high PC specs to run, then get Pavlov VR, it’s more than half the price, and it plays so much better. I cannot recommend Medal of Honor: Above and Beyond to anyone, and as a final note, I have to say that I am thoroughly disappointed with Respawn because I know they’re better than this.

Medal of Honor: Above and Beyond