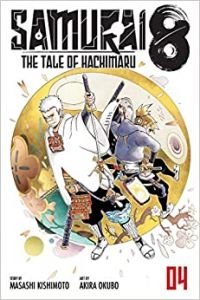 The fourth volume of Samurai 8 wraps up the tournament with Hachimaru going up against Benkei… or so we thought. Apparently, Benkei was actually a thief who stole the keys from other samurai and Kotsuga was in on it the entire time as his partner. With the truth revealed, it’s up to Hachimaru and Daruma to put an end to Benkei’s plans.

That short summary was, pretty much, the entire point of this volume but there were some deeper story elements along the way with a huge focus on Kotsuga’s past. There were also a few surprises that Daruma had up his sleeve as well… including one that would take him out of commission for a while. Since that happened, it was up to Hachimaru to finish the fight against Benkei but he wasn’t alone as everyone gathered together to help stop Beneki from pulling out his ultimate play card: a warhead that would eradicate the planet and everyone on it.

Wow… talk about your backup plans in can you lose…

Of course, everyone was victorious and then the volume just ends without any tease or hook for the final volume. What’s going to happen next is anyone’s guess but with only one volume remaining, they didn’t do a good job of building up any excitement for it.

The biggest focus in this volume was on Kotsuga and Benkei. It was revealed that Kotsuga’s real name is Sanda and that he is the son to legendary samurai Yoshitsune. After Ben told Yoshitsune that Sanda wasn’t compatible with the locker ball, Yoshitsune goes to kill Sanda in order to initiate the seppuku ritual, believing that his incompatibility is a lie. Sanda’s mother gets in the way and Yoshitsune accidentally stabs her in the shoulder. She should’ve been fine but Benkei goes in to check on her and initiates his plan and kills her without Yoshitsune seeing him do so. This leads Yoshitsune to think that he murdered his wife and ends up committing suicide as a result. Benkei then takes Sanda under his wings as his new pawn and suggests he changes his name to Kotsuga.

Of course, Kotsuga didn’t realize any of this and when he was shown the truth, he ends up siding with Hachimaru in the fight against Benkei. It was a rather rushed development but at least Hachimaru has one more ally on his side now.

This series continues to have the same issues throughout… and that it has great stories but none of them are allowed to breathe. These are the kinds of stories that would take several volumes, whether concurrent or spaced out, to tell in a series like Naruto but these are getting wrapped up within just a few chapters here in Samurai 8. It makes me wonder if Kishimoto knew the next volume would be the last and was just rushing things along or if this was the way it was planned from the beginning?

Whatever the case may be, I’m still a bit conflicted because I recognize the potential of all of these stories but they are just wrapping up so quickly! Also, the non-ending ending didn’t help matters either as I have no clue what to expect in the fifth and final volume. We know that Hachimaru is going around and looking for the other key holders to the box but outside of a massive plot device, I can’t see him finding any of them in just one volume.

Even if they just stumble upon the other key holders all gathered together in one place, there is still Ata to deal with and so much more. Why do I have a bad feeling that this is going to be a “And so Hachimaru’s journey continues to find the key holders” type of ending with nothing getting resolved?

I guess I can wait and see but this final volume has me a bit nervous!