Have you heard the tale of the Star Wars Holiday Special? Gather round the fire, and let me tell you the tale. Back in 1978, while George Lucas and friends were making The Empire Strikes Back, CBS decided to make its own Star Wars movie. If The Empire Strikes Back is (arguably) considered the best of the space opera saga, then the Star Wars Holiday Special is on the exact other end of that spectrum. The force was, uh, not strong with that one. However, not to get deterred from getting the most out of its purchase of the franchise, Disney has decided to make its own holiday special. This time, in animated Lego form on Disney Plus.

One thing that helps it is that the bar set by the original special is so low (and I’m not talking about Han). The original holiday special clocks in at two hours, and proves tedious. It tells the rambling story of Chewie going to Kashyyyk for “Life Day,” with his family. Bea Arthur is there along with the principle cast members, and is probably the only person having a good time.

The Lego Star Wars Holiday is no less rambling, but clocks in at a lean 45 minutes. It borrows its framing story from the original special, this time with the crew from the sequel trilogy traveling to Kashyyyk for Life Day. But the similarities stop there (sadly without Bea Arthur). Trying to teach Finn how to become a Jedi, Rey goes off to find a hidden temple. Discovering a mysterious crystal with the help of BB-8, the two get transported through time and space. They have run-ins with characters and scenarios from all across the Star Wars saga, learning lessons about what it means to be a good mentor along the way. 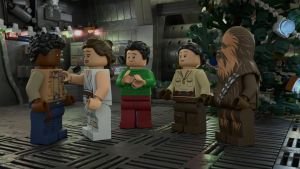 Operating as a kind of Star Wars “greatest hits” narrative, the special proves light on plot but heavy on nostalgia and call-backs. Not that this is a bad thing. A lot of classic Star Wars quotes and lines pop up in humorous new contexts. If you enjoyed the earlier Solo joke, you may very well appreciate an on-point pun made by Admiral Ackbar.

While the special caters to a young audience, it has a lot in it for fans of the franchise who have seen every movie. A lot of the humor comes from Star Wars poking fun at itself. The core conflict arises when the Emperor discovers the time-traveling crystal, and decides to use it to prevent himself from getting thrown down a reactor shaft. Because after all, “there’s no coming back from that!” 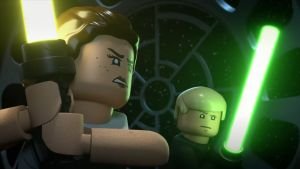 As for the acting, the voice cast consists of a mix of Star Wars veterans and capable soundalikes. Anthony Daniels, Billy Dee Williams, and Kelly Marie Tran reprise their roles as C-3PO, Lando Calrissian, and Rose Tico. The first two appear only briefly, but Tran actually has more lines here than in Rise of Skywalker. Make of that what you will. As for the voice artists filling in the other roles, most do a decent enough job, but Eric Bauza and Trevor Devall stand out from the pack. Bauza sounds just like a New Hope era Luke Skywalker, and captures his wide-eyed innocence and sulking petulance in equal measure. Meanwhile, Devall hardly sounds like Emperor Palpatine, but he has such an unexpectedly sassy take on the role that it works.

With expectations low for a new franchise festival flick, the Lego Star Wars Holiday Special surpasses them well enough. A solid voice cast and cheeky call-backs to Star Wars and classic holiday movies help inject some life into this celebration of Life Day.