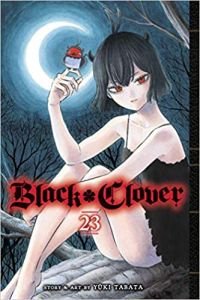 Volume 23 of Black Clover begins a brand-new arc that starts off with Asta being judged by Damnation (I know that’s not his name but every time I see Damnatio, I can’t not see it. I mean… it is only 1 letter off anyway!). Just when things seemed hopeless, the Black Bulls burst onto the scene… quite literally… and state their case to let Asta go. Suddenly, Nozel and Fuegoleon join the fracas and announced that the Wizard King is hereby exiling the Black Bulls in order to have them investigate demons. Yami already knows the true meaning behind this as Julius, pretty much, did them a solid by giving these orders. Damnatio(n) reiterates that if they are unsuccessful in their mission, he will pass judgment and execute Asta.

After tracking down a massive source of curse energy, they realize that they need to go to the Heart Kingdom. Of course, they are heavily protected and nobody is allowed inside unless they have special permission from the Queen herself.

They easily get permission and meet up with a man named Gaja. As Gaja is bringing them to the Queen, Asta is kidnapped and Gaja ends up in combat with Finral, Noelle, and Mimosa. Mimosa had previously been to the Heart Kingdom and knows Gaja which made her confused by his actions. Eventually, it is unveiled that this was all a ploy by the Queen to measure their magic levels. This was necessary because the Queen has been cursed and it was by the same demon that Asta and the others are after!

However, time is of the essence as a certain issue has put a little bit of pressure and quite a big problem on them all. As if time felt short enough as it is, we end our volume with a six month time skip.

I have to say that after that extremely long battle arc, this was quite refreshing. Looks as if we are turning our attention to curses and devils which might give us more information on Asta’s black form, the history of his grimoire, and much more! Also, by showing us how the Heart Kingdom measures magic power and then stating that nobody below their top-level can stand toe to toe with a devil, it already gives us the impression that any fights ahead are going to be colossal and insane! This volume does a great job setting up the next story arc and has me pretty interested!

Aside from the new characters Gaja and Queen Lolopechka (and one of her four guardian spirits Undine), we did get some nice tongue-in-cheek development with a few characters… mainly in the budding relationship department.

The first is with Yami and Charlotte. Yami is as dense as ever and thinks that Charlotte hates him; however, it’s quite the opposite but she can’t quite get her feelings out. She ends up becoming embarrassed and runs away from him when Yami comes to ask about curses and forbidden magic. Charlotte confesses to the Blue Roses that she’s in love with Yami and they all root for her! Then Yami shows up with Asta.

Asta tries to offer his advice and inadvertently states that Charlotte’s ki is much like Noelle’s. Even though Asta thinks of it as respect more than love, he unwittingly just confirmed that Noelle is in love with him. Ignorance sure is bliss, isn’t it?

This was a really solid volume of Black Clover! The series has been hit or miss with me with some volumes being really good and others not so much. This was one of the better volumes with an interesting new story arc kicking off! I’d like to see how hunting devils go and when (not if) the results of this arc give Asta his next power-up. It’s pretty obvious that something is going to happen and Asta is going to end up getting stronger because of it… especially when this arc has made such a big deal over him from the outset.

Even though I am a bit miffed that they did a rather large time skip, I’m interested to see where this goes. I just hope they don’t do a flashback to show what happened during the entirety of the time skip because, at that point, it negates the whole point of doing the skip. Flashbacks are fine but I hope they are used in moderation and we know we are going to need some unless Tabata-san really wants to drive home the fact that for 6 months nothing of interest happened. In a world like Black Clover, I don’t think that would ever be the case.