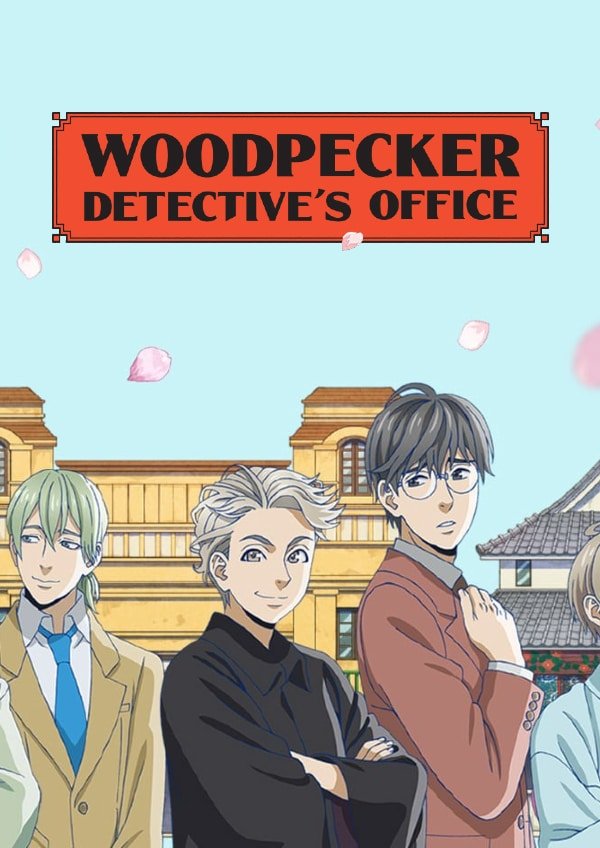 Despite Takuboku’s genius with words, the young author is loose with his money and prefers others to foot his bills. However, no one can deny his intelligence. Therefore, Kyousuke suggests Takuboku, a master at deductions, to start a private detective agency.

This side job quickly takes Takuboku and Kyousuke all around the city, where they must face and solve some of the most vicious criminal acts. Still, the two form a bond of friendship that is second to none.

Right off the bat, Woodpecker Detective’s Office is not Sherlock Holmes. Although main character Takuboku Ishikawa had many Sherlockian traits  – a keen eye, a mastery of deduction, an against-the-status-quo attitude, and I think I even saw Takuboku pull out something akin to a violin – he was not the pre-World War II Japanese version of the famed British detective. Therefore, if you are going into this show expecting a Sherlock Holmes-style story, you will be sorely disappointed.

Then again, if you go into Woodpecker Detective’s Office with any high expectations, you will be disappointed all the same. This series was a dud.

To give credit where it is due, this series did get better, particularly the final few episodes. This was when the story finally managed to focus on something it had only haphazardly attempted throughout the earlier half of its narrative. The show, at last, gave us a better idea of who Takuboku Ishikawa was.

At the start, Woodpecker Detective’s Office, through Kyousuke Kindaichi, described Takuboku as a poetic genius. He was also a playboy, partier, and “free spirit.” If you were to ask me, though, I would say Takuboku was a pompous leech who played off the gullibility of overly generous people. I still think that, but due to the final episodes, Takuboku’s behavior was put in a much better context.

Takuboku was incredibly intelligent, and for most of his life, he had never been adequately challenged. With the use of his quick thinking and silver tongue, Takuboku could usually get whatever he wanted out of people eventually. There was nothing he couldn’t do if he set his mind to something.

And then he experienced his first failure. I firmly believe that he had never before lost in such a horrific way. In this one instance, his brain and wits were woefully insufficient to save the situation. And up to this point, Takuboku had finally faced off with someone he couldn’t outwit, someone who was every bit his equal.

This person forced Takuboku to see the world in a different light and to question his sense of being. And then this person was gone.

Any insecurities that might have existed before, mixed with a crippling sense of powerlessness, forced Takuboku into a dangerous tailspin of anguish.

Having been quite sickly throughout the show, Takuboku’s poor health, combined with his rapidly deteriorating mental state, sent him down a dark path. Watching Takuboku hit rock bottom and then climb back up was easily the best thing to come out of this series. It was a demonstration that this story was meant to be more than a subpar mystery anime with unimportant characters and side plots.

I have never read the original Woodpecker Detective’s Office novel. However, I am willing to bet that it was more in line with what the anime eventually gave us. I don’t want to believe this series was an accurate depiction of its source material.

Although Woodpecker Detective’s Office might have gotten better, it never really became good.

I can accept the argument that Woodpecker Detective’s Office was meant to be more about the relationship between Takuboku and Kyousuke. After all, it was Kyousuke that helped Takuboku when the latter was at his lowest. Therefore, I don’t think it is that big of a leap to see the detective side of this series as the background for a more character-based story.

That said, the cases Takuboku worked on were boring and hard to follow.

This show would throw a bunch of names at you, and it was difficult to keep track of any of them. When you eventually figured out who was supposed to be doing what, assuming that’s even achievable, the mystery’s been “solved.” Then the series would instantly move on to the next thing.

It also appeared as though Woodpecker Detective’s Office relied more on misdirection than deduction.

During the show’s second case, in every retelling of the events, a Japanese shamisen was shown falling to the floor. It was made pretty clear that this was meant to be necessary to solve what happened. In actuality, the give-a-way clue was how people struck a match; it showed whether someone was left or right-handed. That could have been a clever detail. The problem was, it was overshadowed by all this other fluff that didn’t matter in the end.

By the by, this was also the same case where Takuboku was willing to and let Kyousuke be carted off to jail. Not because Takuboku thought Kyousuke committed the crime; he knew he had not. Instead, Kyousuke had unknowingly annoyed Takuboku, and Toakuboku wanted to get back at him.

Related:  Crunchyroll Looks Back at Anime in 2020

Tell me again why Kyousuke was so eager to help Takuboku out with anything?

This was the biggest problem with Woodpecker Detective’s Office; it assumed we were just meant to care about these characters. That was a lot to ask for, mostly since the only two people that mattered were Takuboku and Kyousuke. Everyone else was background filler that, for some reason, got a ton of attention.

Takuboku and Kyouske hung around with a bunch of other writers and novelists. This group of clowns, if I had to guess, was this show’s attempt at comic relief. I can’t think of anything else they were meant to be used for since they served no other purpose.

Woodpecker Detective’s Office only started picking up steam around episode eight. By that point, I had long since checked out. Even when this series was at its peak, it couldn’t help itself with the amount of unnecessary nonsense.

It wouldn’t surprise me if someone thought I’ve been overly harsh with this series. Perhaps to some degree, I have been. Still, what else would be expected when it took so long for anything of interest to happen. When something finally did, I had given up on this one.

It may have been fleeting, but I did see some good from this series. Unfortunately, it was a case of being far too little, far too late.

Through and through, this show felt unbalanced. However, no matter what it did, it never seemed to get it right.

As a mystery story, it overflowed you with unnecessary information to make solving what happened any fun. And as a character study, there was too much going on to keep track of everyone’s name, let alone what they were doing.

All around, this was a disappointment.

Woodpecker Detective’s Office can be skipped.

But these are just my thoughts. What are yours? Have you seen this series? How would you advise Woodpecker Detective’s Office? Leave a comment down below because I would love to hear what you have to say.