Sakura Wars the Animation Series Review: A Sea of Blandness 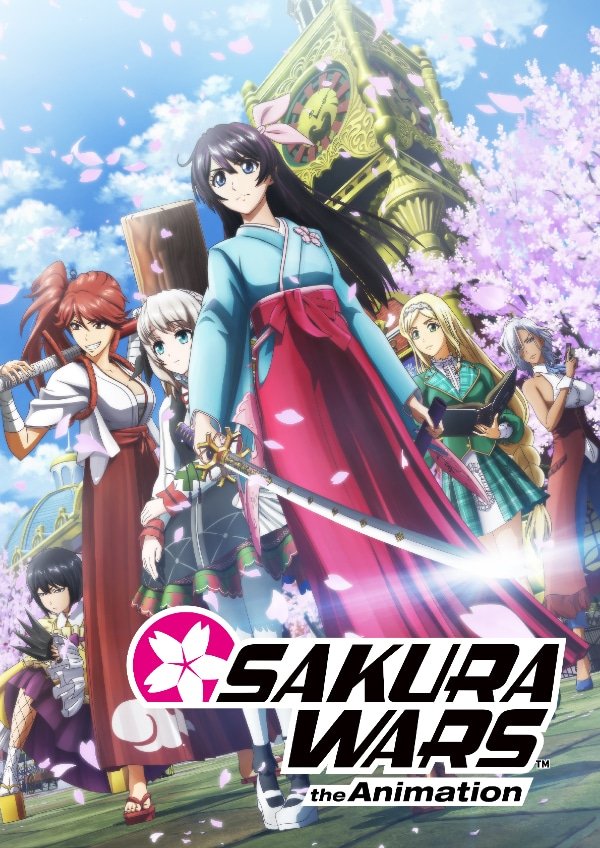 ***Warning, the following may contain spoilers for Sakura Wars the Animation. Reader discretion is advised.***

In an alternate timeline, the year is 1941. The world is under constant threat from demonic attacks, and it is the job of the World Luxury Operatic Federation (WLOF) to protect humanity. Based in Tokyo, the recently formed Imperial Combat Revue’s Flower Division has proven themselves to be the WLOF’s most elite squad. Its members include:

After an incident in Russia, the Imperial Combat Revue receive a new and mysterious member, Klara M. Ruzhkova (voiced by Misaki Watada). However, Klara’s presence brings about a powerful enemy that will stop at nothing to obtain her.

When I went into Sakura Wars the Animation, I didn’t expect much from it. Within the first few minutes of the series, I expected even less. Still, as I continued to watch, I couldn’t help feeling like I was missing something crucial. It was as though I had entered this show with a massive disadvantage.

As of this review, Sakura Wars the Animation is the latest addition in the near twenty-five-year history of the highly acclaimed Sakura Wars video game series. This particular anime, since there appear to be several, also serves as a direct sequel to the 2019 soft reboot of the franchise. Additionally, when Sega was still making consoles, a Sakura Wars release would become one of the best selling titles on its respective system in Japan.

I didn’t know any of this, and though I don’t want to make excuses, can you blame me? With the sole exceptions being Sakura Wars V: So Long, My Love and the 2019 reboot, no Sakura Wars game saw an official English localization. And even if it had, I was a Nintendo fan during the console wars, so I wouldn’t have been caught dead with a Sega system.

What I am getting at is, this review was going to be much more critical. Although Sakura Wars the Animation was not a good series by any stretch of the imagination, there were aspects I didn’t know about it. And knowing this anime is a sequel, that would explain some of the show’s shortcomings.

Nevertheless, I don’t have much to write in Sakura Wars the Animation’s favor. To say this series felt cheap would be an understatement. But, more on that later.

There were only two aspects of this show that I found any interest in. The first was the titular Sakura Amamiya. The second was Sakura’s teacher Hakushu Murasame (voiced by Miyuki Sawashiro).

Sakura wasn’t a great lead character. She could be a bit starry-eyed and love-struck at times. However, considering that the Sakura Wars franchise is both a role-playing game AND a dating sim, I suppose this would have been expected. Regardless, what separated Sakura from the rest of her team was her importance. If nothing else, Sakura felt like she belonged in everything that was happening.

Never did I get a sense that Sakura was a strong warrior simply because the story said she was. Throughout the show, she demonstrated her skills as both a swordmaster and leader. There was a point where Sakura’s teacher, Hakushu, explained that despite using the young Clara as bait, Clara was always under the constant protection of Hakushu and Sakura. These weren’t just words. If someone wanted to get their hands on Clara with Sakura around, they would need to work for it.

And while we’re on the subject of Sakura’s teacher, Hakushu was great simply because she, out of everyone, seemed to have a firm handle on everything. She was never flustered, caught off guard, or provoked into doing something stupid. Hakushu was that one island of entertainment in a sea of blandness.

So, despite my lack of knowledge of this franchise’s history, I can only come to one conclusion: Sakura Wars the Animation was bad.

This series’ animation, holy hell, this series’ animation. I’ll give the show this; it sure looked like it was one long video game cutscene. However, Sakura Wars the Animation was about as good as what was seen on the Sega Dreamcast or the Nintendo GameCube. That, of course, would have been impressive if, you know, it was twenty years ago. And considering this show was a sequel to a game that came out for the PlayStation 4, you would think there would be a bit more quality.

I know I always say that animation does not make a show. But when neither story nor characters aren’t worth a damn, it makes a piss poor visual style even more distracting and noticeable.

This is why I said this show felt cheap; it f@#$ing looked it.

Moving on, I mentioned how Sakura proved her worth as a member of a highly elite demon-fight, mecha-ridding, combat-ready task force. Well, she was the only one who did that. The rest of her squad might as well not have existed.

Here is where Sakura Wars the Animation being a sequel comes into play. I have to assume that in the preceding video game, the rest of Sakura’s team would have been given their chance to develop. Plus, since the Sakura Wars franchise is, supposedly, extremely popular in Japan, it’s not a stretch to expect a person watching this anime would have played the game as well. Thus, such a viewer would probably know all there is to know about the rest of these characters.

Related:  Crunchyroll Looks Back at Anime in 2020

Be that as it may, there are still two problems.

First, assuming all the characters were better introduced and utilized in the game, they sure as hell weren’t in the anime. Aside from Sakura, none of the team had much, if any, of the show dedicated to them. Hatsuho Shinonome and Azami Mochizuki were given some attention, Clarissa Snowflake was briefly highlighted, and Anastasia Palma was around, I guess. Other than those instances, Sakura’s squadmates were relegated to be background fillers.

Second, assuming I am wrong, and the game didn’t explore these characters, then that would make this series as awful as I initially thought it was.

Also, and this was a big slap in the face, Sakura Wars the Animation’s villain was boring, like so incredibly boring. I’ve seen cookie-cutter bad guys before, but when they are in a show that is as barebones as this was, it’s all the more irritating.

I think that is an excellent word to describe this show: Irritating.

The only reason Sakura Wars the Animation won’t fall to obscurity is thanks to it being attached to an already accomplished franchise. Had this been the first installment, things probably would have died here. That assertion, of course, is only my speculation. What I can say for sure, though, since this was my first taste of Sakura Wars, I am not impressed and have no interest in looking into this series any further.

I didn’t have high hopes for this show; I will admit that.

Although I am willing to grant some leniency because of its association with a much larger, more acclaimed franchise, my goodwill can only go so far.

As a stand-alone product, this series fell flat, and it fell hard. The story was dull. The animation was atrocious. The characters were nothing. This was an all-around waste of my time.

Maybe, and that’s a big maybe, I might give the games their fair shot. For now, though, Sakura Wars the Animation can be skipped.

But these are just my thoughts. What are yours? Have you seen this series? How would you advise Sakura Wars the Animation? Leave a comment down below because I would love to hear what you have to say.