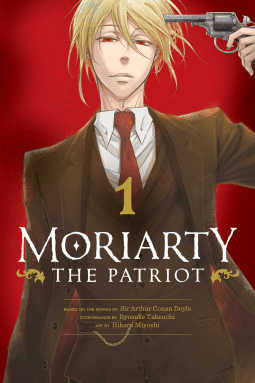 In the late 19th century, Great Britain rules over a quarter of the world in Moriarty the Patriot. Nobles sit in their fancy homes in comfort and luxury, while the working class slaves away at their jobs. When young Albert James Moriarty’s upper-class family adopts two lower-class orphans, the cruelty the boys experience at his family’s hands cements Albert’s hatred of the nobility he was born into. He asks the older of the two boys – who has a genius mind and a killer instinct – to help him rid the world of evil, starting with Albert’s own family!

Moriarty the Patriot is based on the works of Sir Arthur Conan Doyle and is written by Ryosuke Takeuchi. Illustrations for the series are done by Hiakaru Miyoshi. Takeuchi got his big break in 2011 with ST&RS and, later, provided the storyboards for All You Need is Kill.

Miyoshi has used his artistic talents on previous series such as Inspector Akane Tsunemori and the critically-acclaimed Psycho-Pass. Miyoshi and Takeuchi first collaborated on Moriarty the Patriot back in 2016.

VIZ Media looks to release the first volume on October 6 for $9.99.