If you’re a fan of arcade racing games of the past – we’re talking about arcade gems such as Ridge Racer, Daytona USA, Outrun, Virtual Racing, and many others. Then Hotshot Racing is a game that you don’t want to miss.

Let’s be honest; when it comes to arcade racing games, this genre has been in decline for years now. Sure, we’ve had a few titles such as Forza Horizon that stopped the arcade racing genre from disappearing completely, but even then, I regard that series as more of a sim arcade racer more than anything else. But when it comes to a true arcade game, one that all that matters is picking your car, a track, and then trying like crazy to get to point A to point B. Games such as this have been sorely missing. That is until Hotshot Racing arrived on the scene, and let me tell you, as someone who grew up in the arcades, as well as spending hours on end playing arcade racers on various consoles, this game conjures up some memories. Good memories, and lots of them.

Sliding Thru the Curves

There’s not much to playing Hotshot Racing; pick a car and drive it like you stole it. Staying relevant in the game requires knowing two things; Powersliding and Slipstreaming (drafting). Powersliding requires you to enter a turn while releasing the gas, then quickly tapping the brake and hitting the gas again. Then just like that, you’re sliding all over the place just like old times. While getting right behind your opponents will enable you to Slipstream them, gaining more speed while doing so. By doing both of these methods, you’ll be rewarded with some nitro that you can use to increase your speed momentarily. I’d even say that a well-placed nitro boost can mean the difference between coming in last or winning it all. 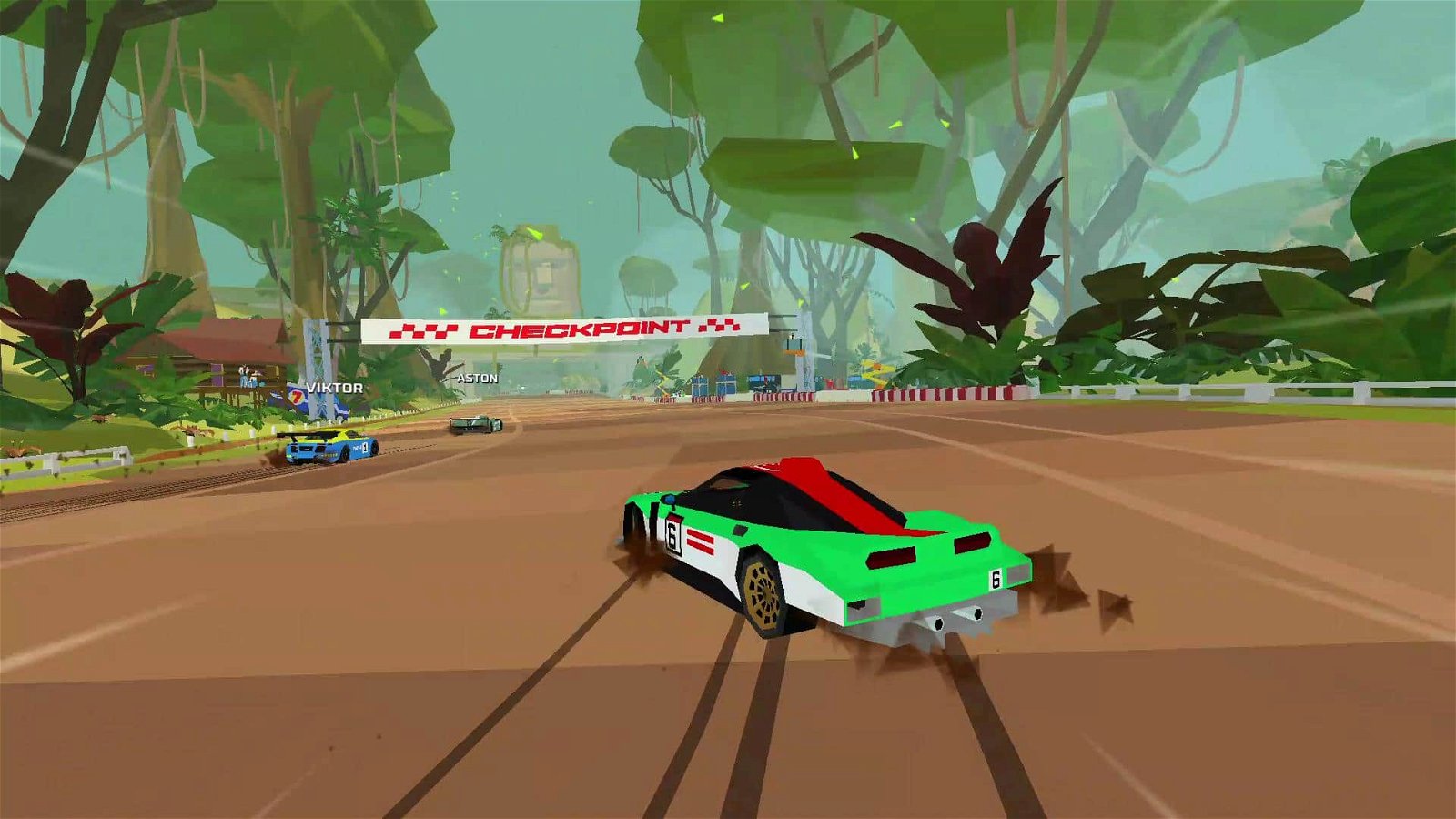 Take it easy on the car.

You have access to multiple drivers from different countries and various personalities. All of which have their own reasons for participating in Hotshot Racing, and they even have their own unique ending. It’s like a racing game version of a fighting game. But it doesn’t stop there, as each of those racers has access to four specific cars that can be driven at any time with no need to unlock them. Each of these has specific attributes; Speed, Acceleration, and Drift – all of which make each vehicle unique. No one car has the same specs as another car, though after extensive playing time, it’s apparent that even though the specs differ, multiple cars drive similarly. Find one that suits you and use it to dominate.

In addition to this, Lucky Mountain Games has included multiple camera angles, similar to Sega’s Virtua Racing. Here you can select between two behind the car views, a cockpit view complete with in-car details, a bonnet view, and a front bumper view. Each can be selected on the fly by pressing the camera angle button, though I mainly stuck with the bonnet view. I also noticed that some cars do have a clipping issue while using the bonnet view, obscuring your view. Hopefully, this gets cleaned up in a future update.

After every race, you’re able to watch the race via a replay system that lets you view not only your car via multiple angles but also the AI-driven cars. 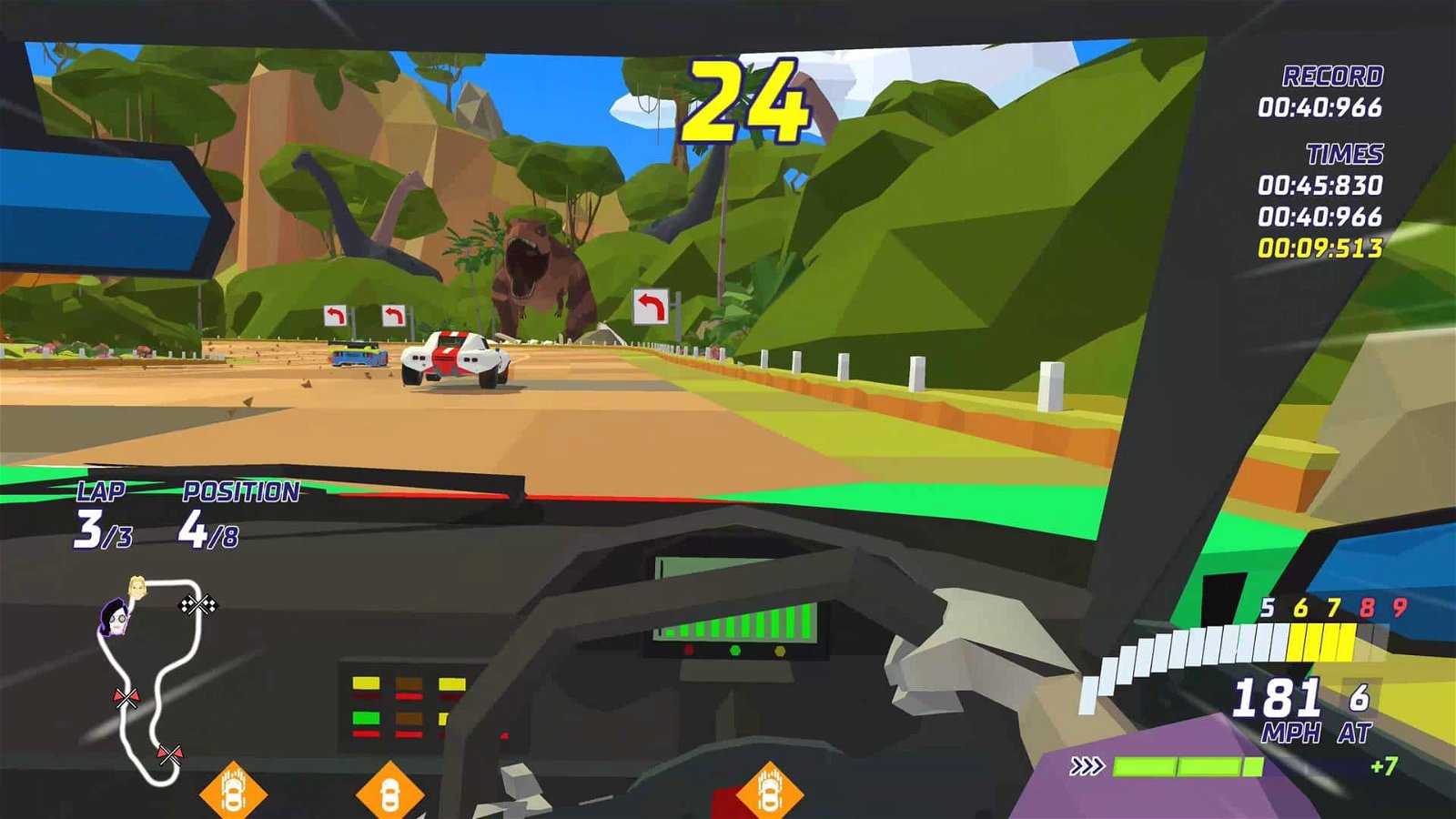 There are several modes for you to pick from in Hotshot Racing, including a Grand Prix, Time Trial mode, and a Single Race mode. Grand Prix pits you against several other AI controller racers across four different Gran Prix circuits, each with Normal, Hard, and Expert’s selectable difficulty. While the Time Trial will have you competing against yourself or a downloadable ghost to achieve the fastest laps around a track. Beat the best and get your ghost uploaded for everyone to see if they can best you. And finally, the Single Race mode, where there are several variations to choose from; Arcade, Cops & Robbers, or Drive or Explode.

The Arcade mode is just as it sounds, sweet, sweet racing, while Cops & Robbers will randomly drop you into a race as a police car or robber – if you’re a cop, your job is to smash up as many robbers as you can and converting them to cops if successful. While the robber’s sole goal is to collect as much money as possible and not get smashed up. Drive and Explode is an interesting take on an elimination mode, but it feels like it was dreamt up after someone finished watching the movie ‘Speed,’ yes, that one with Keanu Reeves and Sandra Bullock. Each lap has a requirement to get to and maintain a specific speed. Keep it up, and you’ll stay alive, but slow down and cross the checkpoint line, and you’ll blow up. You also have a health meter, and if that falls to zero, also causing you to explode. While I enjoyed this mode, the AI can make it almost impossible.

I’m fine with a challenging game, but not a cheap one. And it’s here where I have an issue with Hotshot Racing – the damned AI. It can be a pain at normal difficulty, but it becomes ruthless when you crank it up. We’re talking about rubberbanding, where the AI passes you, and it’s maddening trying to catch up to it, or when you’re just trying to race cleanly when the AI plows right into you. Multiple times I’ve had the AI smack me so hard that my chances for placing were dashed, leaving me with a “WTF” look on my face. I get it, the AI is meant to be challenging, but it’s supposed to be racing me, not treating me like I’m in a destruction derby. This made it hard to enjoy the Drive or Explode mode as the AI would ram into me constantly and depleting my health before I could finish up my first lap at times.

Hey, have I seen you before?

Graphically, Hotshot Racing looks like it could be related to Sega’s Model 1 Virtua Racing title. With the low polygon and colorful visuals, you’d be hard-pressed not to compare them to a late 8os or early 90s arcade game. But don’t let that fool you as a lot is going on in the game, such as objects moving around in the background like UFOs, Dinosaurs, Ferris Wheels, and more. Sure, it looks like an older arcade racer, but it sure doesn’t perform like one, and that’s where the charm of the game comes in. Of course, what would an arcade racing game be without the music? In my mind, terrible, but thankfully the tunes that are blasting as you powerslide around the corners are catchy, with some of them sounding reminiscent from my arcade racing games of yesteryear. 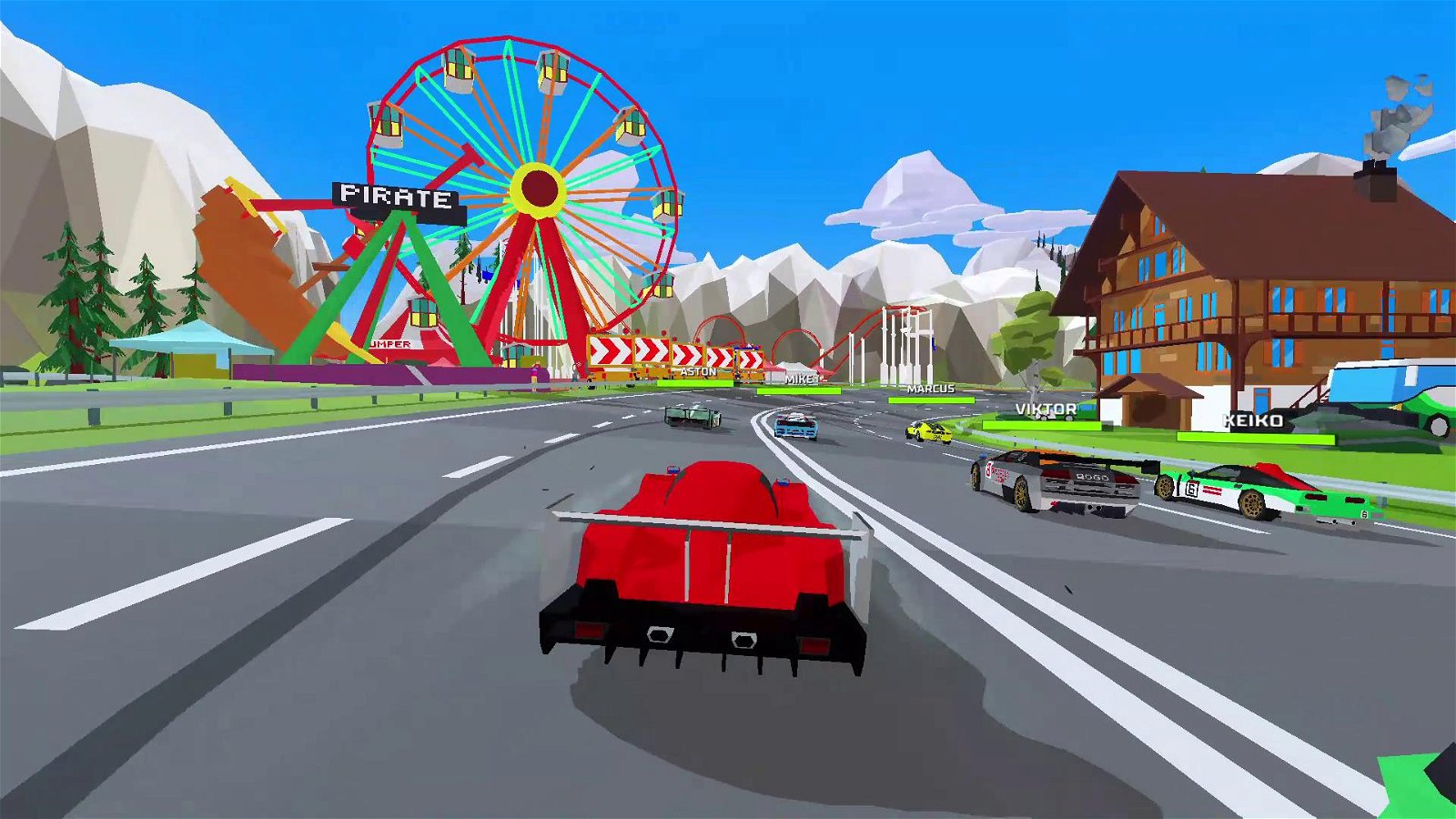 Usually, an arcade racing game is short on replay value. You beat the tracks, you play around with the additional modes, and that’s all there is. Thankfully, there’s a lot here to keep you playing if you’re the sort who wants to experience everything. After spending some time in-game, you’ll unlock achievements that reward you with unlocks and currency that you can use to customize the drivers and trick out the cars with different paint jobs, wheels, and body kits. While upgrades don’t change the vehicle’s performance, I thought it was a nice touch to have my car look different from the rest and standing out.

While Hotshot Racing checks almost all the checkboxes for a great arcade racing time, it’s solely missing something that I feel can hurt the game in the long run – track features that enhance the overall racing experience. Looking back at some of my favorite games, such as Outrun, Ridge Racer, and a few others, not only do they feature a large variety of tracks, but they do a great job when it comes to tracking design. I’m referring to slopes, inclines, banking turns, and the occasional dip that allows you to get some height if you’re going fast enough. Some of the aforementioned track features are scattered across a few tracks; it’s just that there’s not enough to my liking, and that’s a tad disappointing. Sure, there are more than enough tracks to race on with 32 courses, 16 normal and 16 mirrored, but some track design variation would go a long way.

Unlike arcade racers of the past, Hotshot Racing lets more than one person get in on the fun with its multiplayer portions. Another person can grab a controller and race alongside you in every mode except for the time trials for local players. Or you and another can jump online for up to eight-player sessions. Unfortunately, only a limited number of online slots were available during my time with the game, and I missed all of them. That said, I couldn’t test out how the game performs online, but I’ll update this review once the game is available to all.

And while I wasn’t able to play online, I did get to see just what options are available for the online modes; there are quite a few. You jump into a quick race or search for one via specific settings, or host your own races; public, private, or invite-only. All online modes are peer to peer, and your experience may vary depending on who hosts a game. Again, since I didn’t get a chance to try them myself, I can’t comment on how well they are yet. Though the local co-op racing with my children was an interesting experience, that’s for sure. 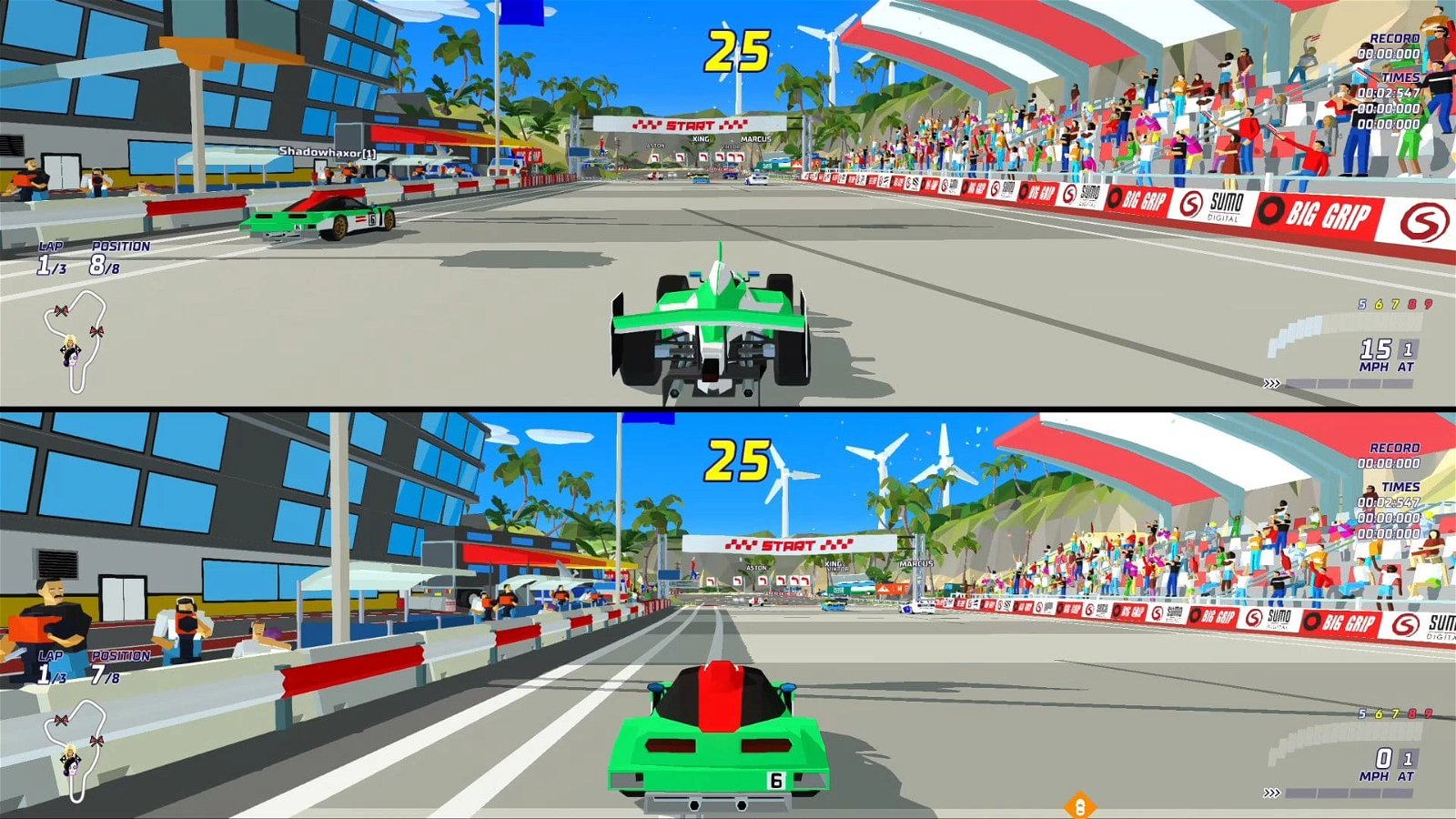 My time with Hotshot Racing was with the PC version, and as such, I’m inclined to talk about my experience on that platform, which was great. Testing on multiple PC setups ranging from a lower-end system to a much higher-end machine provided me with a stable 1080p 60 frames per second experience in both the single-player and local co-op modes. I didn’t notice any slowdown or a hint of pop-in during my time with the game. There’s not much here in terms of PC options, as enabling V-Sync is the sole option on the PC-centric side. That said, this game will run on anything with a discrete graphics card and processor that’s been released in the past five years.

As I said at the beginning of this review, if you’ve ever wanted the arcade racers from the 80s and 90s to make a return, this Hotshot Racing is worth a playthrough. Outside of the AI being a pain at times, I’ve enjoyed my time with Hotshot Racing, and I didn’t want it to end. Here’s hoping that Lucky Mountain Games has more in store after the game is released. Would you believe this was Lucky Mountain Games’ first attempt at an arcade racing game? 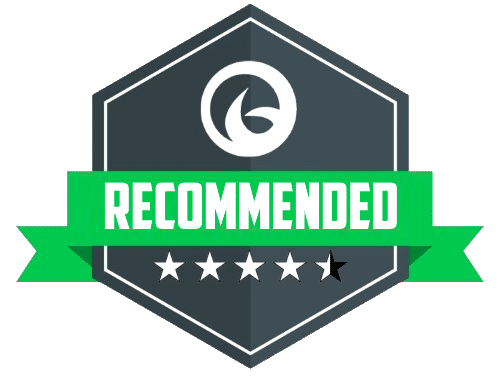 Review Disclosure Statement: Our review copy of Hotshot Racing was provided to us by Curve Digital for review purposes. For more information on how we review video games and other media/technology, please review our Review Guideline/Scoring Policy for more info.

Hotshot Racing is an enjoyable return to the simplistic arcade racer and a damned good one. It’s just you, your car, and a mad dash from start to finish, jamming to some tunes while trying not to get smashed by your opponents. If you’re a fan of arcade racers, give Hotshot Racing a try.