Vanillaware is a treasure of the industry. They’re a studio of mostly artists whose primary goal is to create cutting edge 2D games. Their most recent game to attain this goal is 13 Sentinels: Aegis Rim.

13 Sentinels: Aegis Rim is a game I’ve been looking forward to for a long time. It was lauded by iconic directors like Masahiro Sakurai and Yoko Taro. While Taro praised the developer Vanillaware in particular, Sakurai was blown away at how the game itself proved the infinite possibilities of the medium. That’s high praise indeed, so I went in with higher expectations. While I did not walk away thinking I had played the perfect game, I had still played a great game unlike any other. 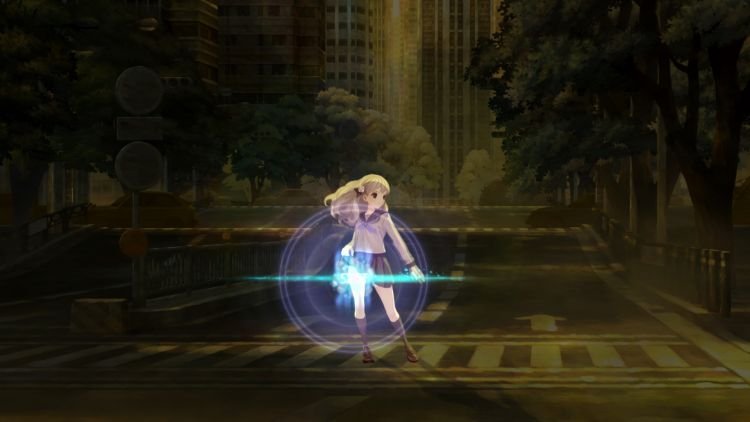 You play with the main cast of 13 characters in a visual novel with diegetic dialogue and player movement.  The story is told entirely through dialogue so every bit of information either drives the plot forward or is in a conversation happening in the background, like students talking about their day. You can control your character, who you talk to, and the pace of each route. There isn’t an immense amount of options like a western RPG, but what’s important is that you decide the momentum of the story. While playing, you’ll collect keywords that each character can think about to offer their own perspective, remind the player about important information, move the plot forward, or perform an action like eating food or getting their school bag. What sold me on the experience of 13 Sentinels: Aegis Rim is being able to change characters whenever something interests you.

I didn’t really expect to enjoy a game with this large of a cast, but I walked away very impressed. Each character has their own quirks, relationships, past, future, problems, and major plot threads that they’ll be focused on for their individual arcs. How certain characters appear in other stories can completely change how you’ll view them. What’s also fascinating is how the different time periods the story takes place throughout a 40-year interval. This means that you’ll be seeing the lives of the main cast and various supporting characters at the end of World War 2 in 1945, a thriving post-war Japan in 1985, and a mysterious future of 2025. Shifting perspectives is a massive strength of a story with this scale. There’s a constant sense of unraveling the truth that kept me going as the player. While I kept being bombarded with questions, I also kept getting satisfying answers and revelations that had me on the edge of my seat and excited to learn more.

Enjoy the story and fight off waves of kaiju

“Destruction”, the Strategy RPG mode, offers a break from the main story while offering bits of dialogue and connecting the plot to the present. It’s a fun distraction that offers a different style of gameplay, but I found it simple and easy to break, even on Normal difficulty. There are also Easy and Hard modes for those that aren’t very experienced with strategy games or those that want a challenge respectively. You can also earn different rankings for each difficulty. By obtaining S ranks, you can unlock Mystery Points you can spend on files in the Analysis mode-which you can use to revisit past story events or read up on different terms and plot points from the story.

Related:  Japanese YouTubers among the first to get access to the PlayStation 5 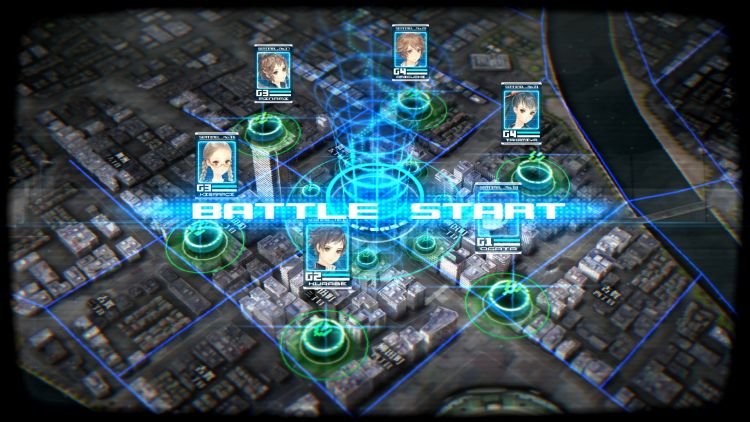 The characters in Destruction mode are divided up by different generations of Sentinels. For example, the first generation Sentinels are melee focused and the third generation can fly. Each map is located in a different part of Japan, where the main objectives are to defend structures called Aegis and defeating enemies. You could wait out a timer, which stops while you select your options, but you gain a better rank the faster you complete a stage. When acting as each character, you can move them around the map, select an attack, defend, or repair their sentinel.

All of your skills take up energy which can be regained by defending. If your unit runs low on HP, they can eject and wait for repairs. While they do so, they’re vulnerable to attack. You gain currency from defeating enemies that you can spend on upgrades for your skills, stats, multipliers for your score and money, and Metasystem functions that allow you use skills like restoring your entire team’s HP or energy by a certain amount or using a stage-wide EMP that drops aerial enemies.

The Destruction mode was a fun side activity that offered fun character interactions, but it lacked the depth of other games in the genre. What also disappointed me is that the maps for battle are lacking in presentation compared to the main story. Player and enemy units are cubic 3D figures and attacks are represented in a minimalistic style. You can, however, look at fully realized models and attack animations while customizing your characters and you can see portraits of the enemies while highlighting them in battle-but it’s not enough. While moving around hand-drawn and painted mecha or kaiju would be a massive feat for the developers, that doesn’t mean the visual presentation is up to par.

Witness a stunning and painted world come to life

The art is gorgeous and has visuals painted by hand. These watercolor sprites and environments pull you into a world that looks delicate but sometimes terrifying or mysterious. An unfortunate flaw of this game sadly comes from a limited amount of environments. Revisiting so many of the same locations makes sense due to the story, but little details would’ve gone a long way. Changes like the same classroom looking different on different days with other information written on the chalkboard, different colored lighting, or a different camera view would’ve really shaken things up. The varying time periods do offer a ton of variety in the imagery and can even exemplify some of my examples, but I would’ve liked more after completing 13 different storylines. 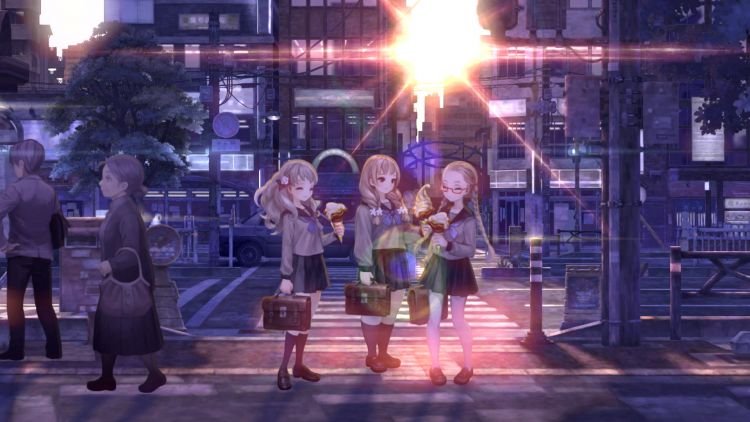 13 Sentinels: Aegis Rim could only be realized as a video game

13 Sentinels: Aegis Rim is a game best experienced as it’s intended medium. The story is dense and a huge main cast may seem intimidating, but the execution makes it feasible. There’s a joy that comes from bouncing from one character to another whenever a twist happens or a new plot point gets introduced. Maybe a story element takes on a whole new meaning in someone else’s story. Maybe something now appears painfully obvious once you have more context as the player. Of course, the game prevents you from progressing at certain points until you make more progress with another character, but you’re still given so much freedom to jump from one to the other. You only hit roadblocks with each character just so certain twists or scenes aren’t undermined by another character’s narrative.

There’s a consistent flow of information, but each character’s story is just one layer of the overall narrative. They also all intertwine, so I never felt confused. The bottom line is that the story of 13 Sentinels: Aegis Rim could not work as a linear narrative. Of course, you could tell it as such in chronological order, but so many events happen on the same days to various characters and there are so many twists and plot threads that are best experienced when spun together.

13 Sentinels: Aegis Rim is defined by player freedom. Its story is not contained within pages or episodes, but in moments in time.

Review Disclosure Statement: Our review copy of 13 Sentinels: Aegis Rim was provided to us by Atlus for review purposes. For more information on how we review video games and other media/technology, please go review our Review Guideline/Scoring Policy for more info.