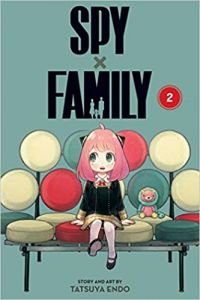 The second volume of Spy x Family picks up with the results of Anya’s entrance exam to Eden Academy!

Right when all hopes and dreams seem to be over, it is discovered that she is the top student on the waiting list and if someone drops out, she will get in. Of course, someone does so Anya gets to go through orientation. There, Twilight arranges it so that she is in the same class as the son of his target. Twilight’s mission is to make Anya into an Imperial Scholar so that he can mingle with his target and gain information.

Unfortunately, everything that could possibly go wrong does… and this leaves both Plan A and Plan B in jeopardy. Things don’t get any easier as one of the agency’s men on the inside is discovered and apprehended. The person who ends up taking over the interrogation is a new character called Yuri Briar… he is Yor’s real-life sister and didn’t know that she had been married for an entire year because Yor simply forgot to tell him. Yuri knows about Twilight but doesn’t exactly know what he looks like. Well, he’s about to find out because Yuri is paying them a visit to congratulate them on their marriage!

Apparently, Yor and Yuri also have no idea what they do for an actual living. This adds even more secrets into the mix which makes things even more awkward. Once again, Anya is the start of the show in this volume as she struggles to play the role of an Eden Academy student. I won’t spoil anything that happens but it’s easy to see how Twilight’s plan can go up in smoke just leaving it in Anya’s hands. Still, she’s hilarious and precious all at the same time. Plus, her facial expressions are just amazing whenever she’s reading minds.

Related:  The 8th Son? Are you kidding me? Series Review: Far Too Often

Despite my praise for Anya, she didn’t really have much in the way of character development. She’s still the same Anya. The only difference is that she begins to study on her own as she understands that Twilight’s mission requires her to be smart. Outside of that, nothing much has changed. The same could be said for Twilight/Loid and Yor.

We do have a new character here with Yuri Briar. Being 20, he is described as being a cute boy but don’t let his good looks fool you. He’s as ruthless as they come and as a member of the SSS, he is not afraid to resort to torture to get information out of his suspects. The fact that he’s Yor’s sister and part of the counter-intelligence working against Twilight’s agency makes this a very awkward situation. It’ll be interesting to see how all of this is handled in the third volume!

The first volume was truly amazing. It was one of the best first volumes of manga I had read in a long time. The second volume was equally as entertaining and interesting. Now that Twilight has used Anya to infiltrate Eden Academy, he is fully aware of the treasure trove of information that awaits him inside. With Yuri entering the mix, it just adds a whole new dynamic to this.

Anya continues to be the best character in this series by far. Based on her reactions, I can’t really explain how nobody suspects her of being a psychic. Maybe they just think that she’s a normal kid with an active imagination. Still, as immature as Anya is, she’s still mature enough to protect Twilight and Yor’s secrets, even though she almost let it slip that Twilight was a spy when Damien asked her what her father did for a living.

All-in-all, this was an amazing follow-up and I can safely say that I am officially hooked on this series. If you’re looking for a great comedy with some spy action involved, start reading Spy x Family. You’ll thank me later.