I Love You So Much, I Hate You Review 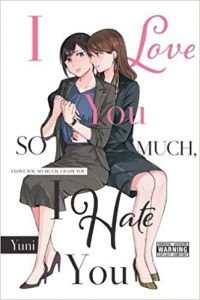 I Love You So Much, I Hate You (Nikurashii Hodo Aishiteru) is a manga from Yuni that focuses on a yuri relationship between two office workers, Fujimura and Asano. Fujimura was the ace of the sales department at a company and was promoted to the planning department where Asano was the Chief. Fujimura fell in love with Asano but the issue was that she was married. Still, despite this, Asano decided to keep seeing Fujimura simply because she found out that her husband had been cheating on her and her love for him had all but disappeared.

Things were going well until another co-worker started having an affair with her boss and the rumors spread around the office like wildfire. This caused Fujimura and Asano to back off of their relationship for the time being. Once things settled down, it all picked back up again; however, after much conflict in her mind about everything, their relationship isn’t as stable as it would seem.

The sad part about this manga is that it’s only one volume! I was actually sad when I discovered that it wrapped up just after nine chapters because I was really getting into it. They were building up a lot of tension but then everything just got resolved. I only described about half of the volume to let you all discover how it ends on your own but I didn’t I really see the ending coming that soon. I’m not sure if it was meant to be like a one-shot that got published or it was something that didn’t just catch on in Japan but the fact I was disappointed over it ending in just 9 chapters speaks to how much I was actually enjoying the story that was being told.

There is a small cast of characters that mainly focused on Fujimura and Asano.

Fujimura has always been attracted to women but she never really had much luck. When she fell in love with Asano, she didn’t know if she should pursue it; however, she did and the results were something that surprised her. At first, she felt it was just a one-sided love but that eventually turned into a consensual relationship between the two of them… right up until the half-way point where Asano breaks it off out of fear of continuing with this affair. Fujimura is pretty outgoing, yet reserved at the same time. It is as if she picks and chooses when she wants to be assertive and when she wants to be reserved. It brings a nice balance to her character and I actually enjoyed her quite a lot.

Asano, on the other hand, is a bit different. She is poised and dignified in the workplace but after she experienced a lesbian relationship with Fujimura, she becomes much looser and open around her. She was always seen as a clam and gentle person. Many believe that she was the perfect example of a manager at work just because of her personality. Despite her friendly, yet fair, workplace character, she was still very business-oriented, and being the Chief of the planning department, it is quite understandable as to why she has to be placed into that kind of mindset. Still, you could tell that her relationship with Fujimura was something that she really wanted but the conflict that welled up inside of her made her very uncertain about things. Those are just normal human reactions and it’s nice to see a bit of reality being brought into a story such as this! I also enjoyed Asano as a main character as well!

Again, I’m sad to see it end after just one volume but I guess that’s just the way it goes sometimes in the manga industry. Being a quick read at about 276 pages, if you want a short and sweet yuri romance series with some explicit scenes (and there were quite a few of them peppered throughout the book), then I highly suggest picking this one up. If it left me wanting more out of it, you may find enjoyment out of this story… especially if you’re into yuri love stories.

I will say, though, that the story was quite basic but sometimes basic is best. Even in the short span of the story, the pacing felt great and there was enough believable conflict to make you feel for the characters. For what little it had presented, it sure accomplished a lot and that is something tough to do when a series is cut short.

So, check this one out! It’s not much of a time investment and it’s still a pretty solid story!