While Halo Infinite has been delayed until 2021, you can still get a little bit of Halo Infinite into your lives with the Nerf Halo Infinite MA40 Dart Blaster, which was announced a few months back. It is the latest Nerf x Halo toys and one that arrived early last week, which gave me some time to put the toy through some paces and have a bit of fun with the family.

And yes, this did arrive early that it was supposed to, but I’m not complaining one bit.

What’s in the box?

The MA40 color scheme consists of an off-white body, with army green parts color surrounding the weapon’s front and undercarriage. With the rifle’s tip, a non-functional flashlight that sits under the nozzle, and the magazine being adorned in bright orange, to avoid any confusion of this being an actual weapon. The only bits that are black are the forend, the stock, the top of the MA40 that is used to clear out any dart jam, and several other smaller items such as the safety toggle dial, which is just a piece of raised plastic and isn’t operational at all. There’s a tactical rail for attaching the included raiser and scope, which is just a piece of plastic with a decal on it, on the top of the MA40.

Similar to several of Nerf’s higher-end guns, this one is motorized using 4x C batteries that are housed in the forend of the weapon. And given how much juice the MA40 needs, I’d recommend using higher-quality batteries instead of cheap ones. My time with shooting various objects with the MA40 can attest to this, as the cheaper dollar store batteries didn’t last as long as the Energizer MAX Alkaline Batteries I used for testing.

Between my son and me, we own a dozen motorized Nerf guns, and this one is currently my favorite due to the single design and how light it is. Compared to the Nerf N-Strike Elite Infinus and the Nerf Ultra One Motorized Blaster, the Nerf MA40 is the slicker-looking toy out of the bunch. While the other two look like futuristic weapons of destruction, the MA40 is a much simpler design, easier to hold, and lighter.

As the MA40 is a motorized semi-automatic weapon and will fire off one dart at a time when pulling the trigger. To get ready to fire, you’ll need to prime it first by squeezing in the button that sits below the MA40’s trigger. Doing so will engage the motor, which takes about a second to get up to optimal firing power. You’ll know when it’s ready by the sound of the motor revving up. The range of the MA40 is decent – I measured the distance of several darts, which varied between 26-30 feet. There is some bullet drop around between 22-24 feet. Darts, when fired, won’t fly straight without aiming higher for more distance, which is typical for non-modified Nerf rifles.

For those who happen to have the larger Nerf magazines lying around, you can also pop them into the MA40 and get around the 10 dart limit. I’ve tried out both of the 16 and 18 round magazines, and they work just fine. For giggles, I attempted to use the 30-dart drum from the Nerf N-Strike Elite Infinus, and it wasn’t long enough.

A fun Nerf Gun with some flaws

The chamber in which the darts travel through before they’re ejected out of the weapon is smaller than some of the other Nerf toys we own as well. When attempting to use 3rd party foam darts, several were unable to enter the chamber due to the dart head’s shape. This is frustrating as we own hundreds of darts (official and unofficial), and the MA40 can only use a fraction of them. So you’ll need to be careful as to what darts you load into the weapon. There’s no functional scope or red dot, which I feel is necessary for a weapon such as this. I’ve already looked into correcting this as Nerf does sell several kits that add on functional scopes and red dots; the Nerf Modulus Ops Upgrade Kit and the Nerf Rival Red Dot Sight. I’m not sure if they’ll work, but I’ll find out when both of those get delivered to me. 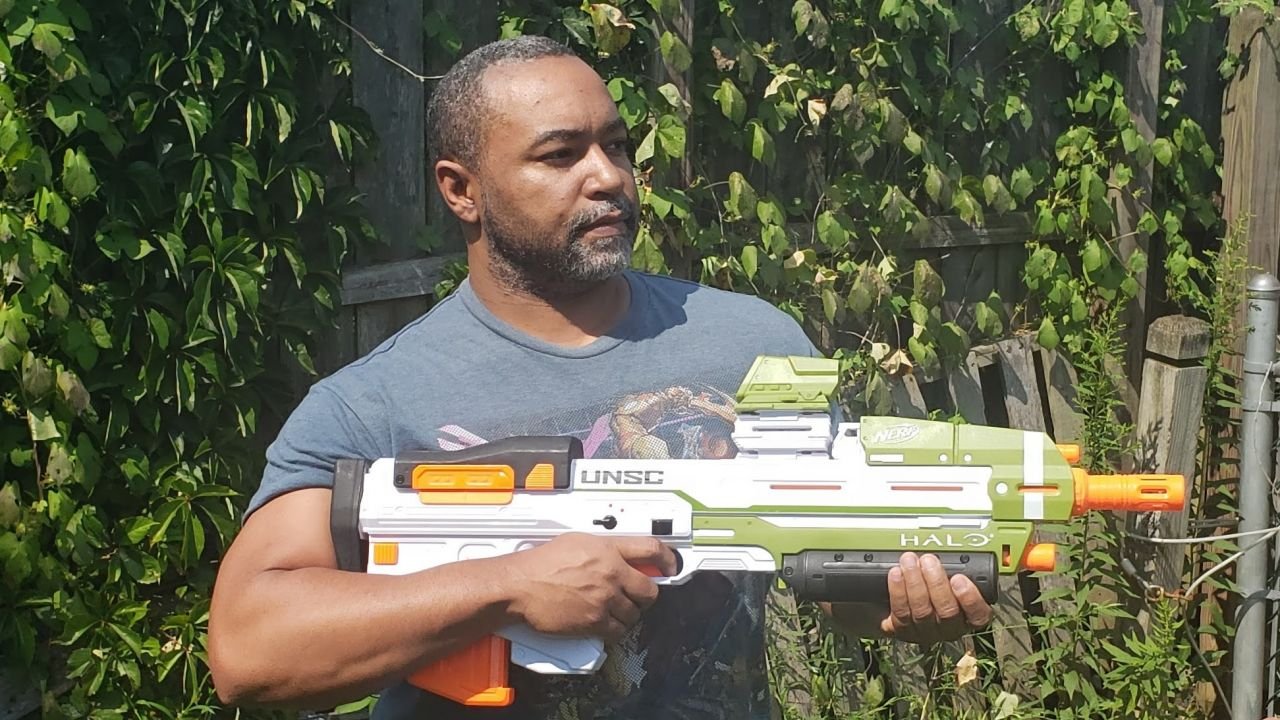 You can get your own Nerf Halo Infinite MA40 from Amazon, or the Hasbro Pulse website.