Paper Mario as a series has a complicated history. The first three games sadly feel forgotten as far as references and influence on modern entries go. The attitude of developers towards the earlier entries feel like fear or shame since they strayed too far from the Mario brand.  The latest entry in the series is nonetheless a beautiful, charming, and hilarious journey.

Paper Mario: The Origami King marks the Action/Adventure series’ Switch debut. The story follows Mario (and Luigi too, I guess) being invited by Peach to the Origami Festival. After arriving at Peach’s Castle, Mario notices something is off. Peach and the Toads have all been turned into origami monsters and are under the control of King Olly. Mario is then thrown in the dungeon where he meets this game’s partner/”mcguffin” character, Olivia. The two then escape along with the help of Bowser and his minions and Mario’s journey to save the world from being turned into origami begins. 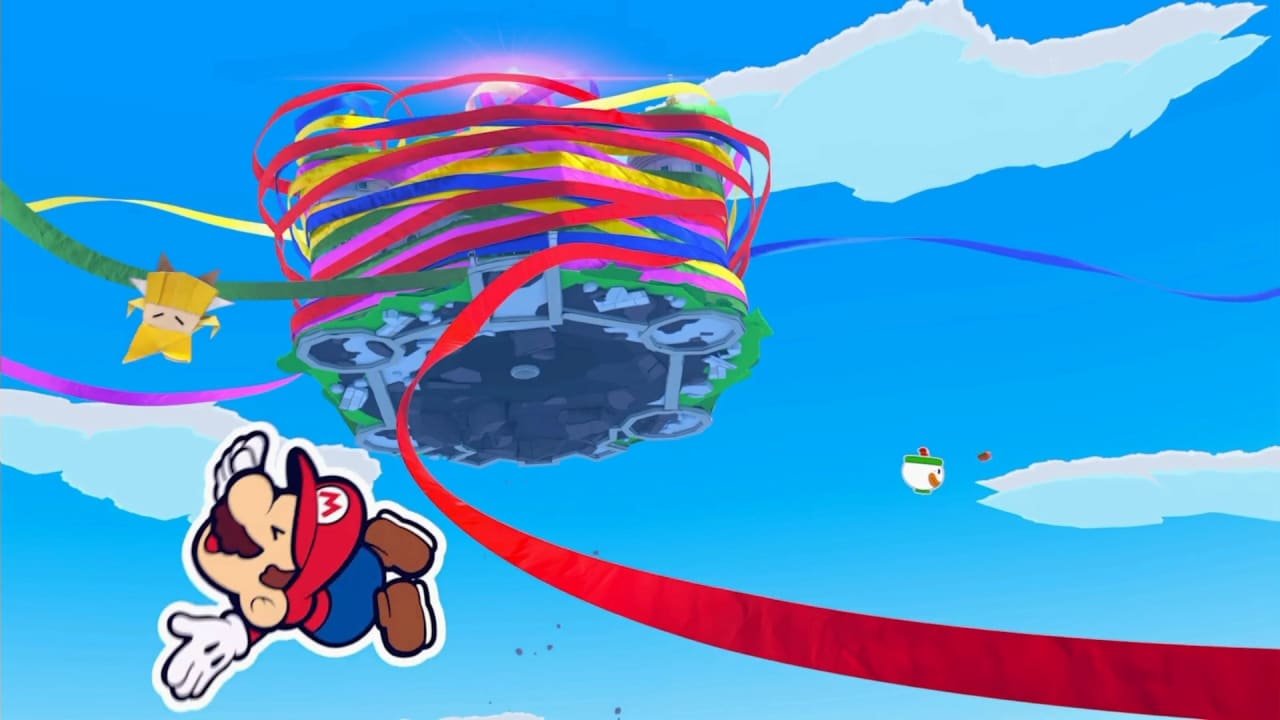 Gameplay outside of combat in Paper Mario has mostly been consistent. You explore the overworld, hit things with your hammer to break objects for items, money, or to create a path, and encounter enemies. Origami King introduces hidden Toads that you can find for various rewards as well as Not-Bottomless Holes that you fill in by throwing confetti. Mario also has a new ability called the Thousand-Fold Arms that turns his arms into extendable origami that you can control either with motion controls or the left stick. Each arm is controlled by the left and right Joy-Cons when using motion controls and is used to peel layers of paper to reveal secrets or smash objects.

There’s also a new ring-based battle system. You can move multiple layers of rings in turn-based battles and move rows vertically across the board to arrange enemies into groups of 4×1 or 2×2. Then you can jump on their heads, use your hammer, block, or use items. You can also use weapons and properly timed inputs to do more damage.  Spending coins to extend the time limit of your turns or pay off Toads. As you give them more money, they’ll reward you by providing perks such as healing you, rearranging enemies, and even attacking enemies for you. The more money you send  Toads way, the greater the effects you’re provided.

I can see the appeal of the new ring-based combat, but I didn’t enjoy it. I was honestly not that great at it, which dragged battles out, but I was never challenged for needing improvement. Your damage is increased if you place every enemy into a row or group and you can finish off more enemies by using each intended turn per row or group. If you don’t, more enemies can attack you and the battles drag out.

Regardless I never died in a normal battle. I had enough healing items despite only buying them once, I rarely needed to heal in regular battles, and there were enough healing items found in the overworld to keep me safe-along with benches that restore your HP and give you a nice little conversation with Olivia. Battles are either over in one turn or drag on for too long. Any minor mistakes will add turns to the battle and make it go on longer. Partner characters also make a return but they’re basically useless. Assuming they actually attack, they’ll wipe out a single enemy or group. 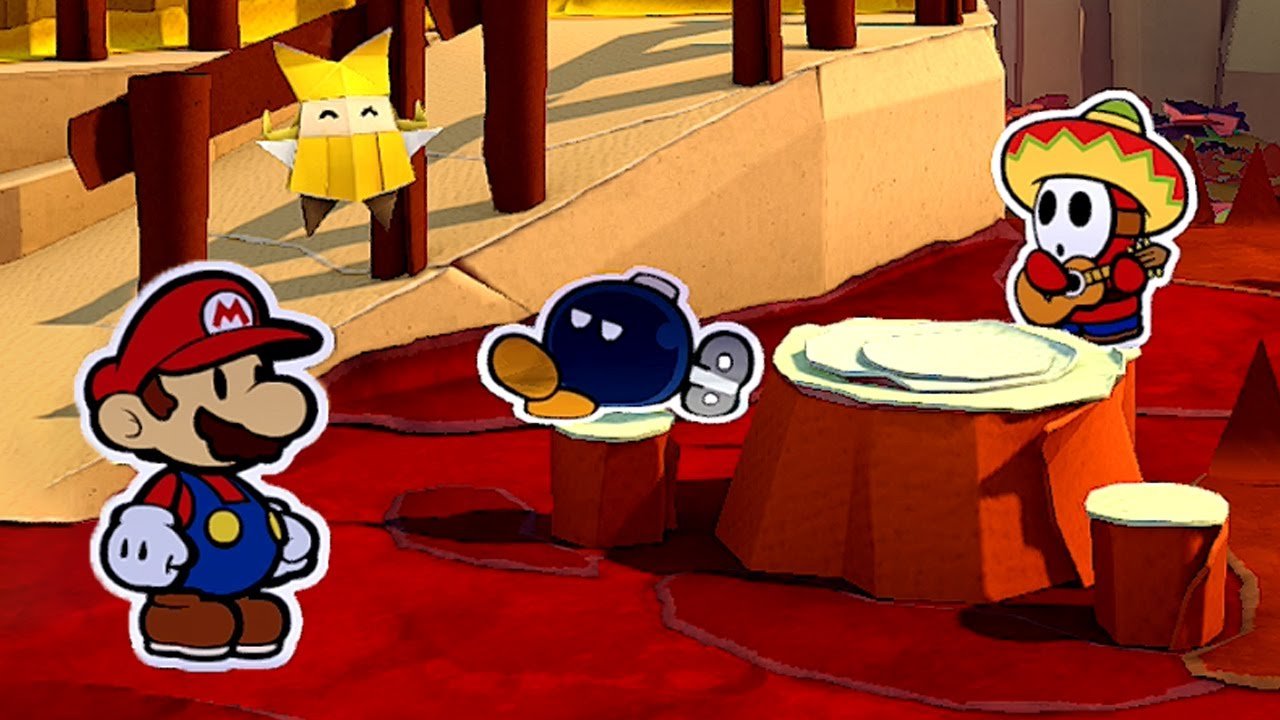 They always do enough damage in the chapter they’re introduced in to always defeat enemies with an attack. You can’t control them and they also don’t help with boss battles. There also is no EXP or leveling up. Instead, you rely on weapons and can find upgrades that increase your maximum HP. Olivia will remark that Mario seems stronger every time his health increases, but the effects are never obvious since you don’t have an Attack stat. You just seem to deal more damage as you increase your health, eventually dealing more damage with your default attacks and being able to defeat enemies in the overworld without starting a battle by jumping on them or bonking them with your hammer. 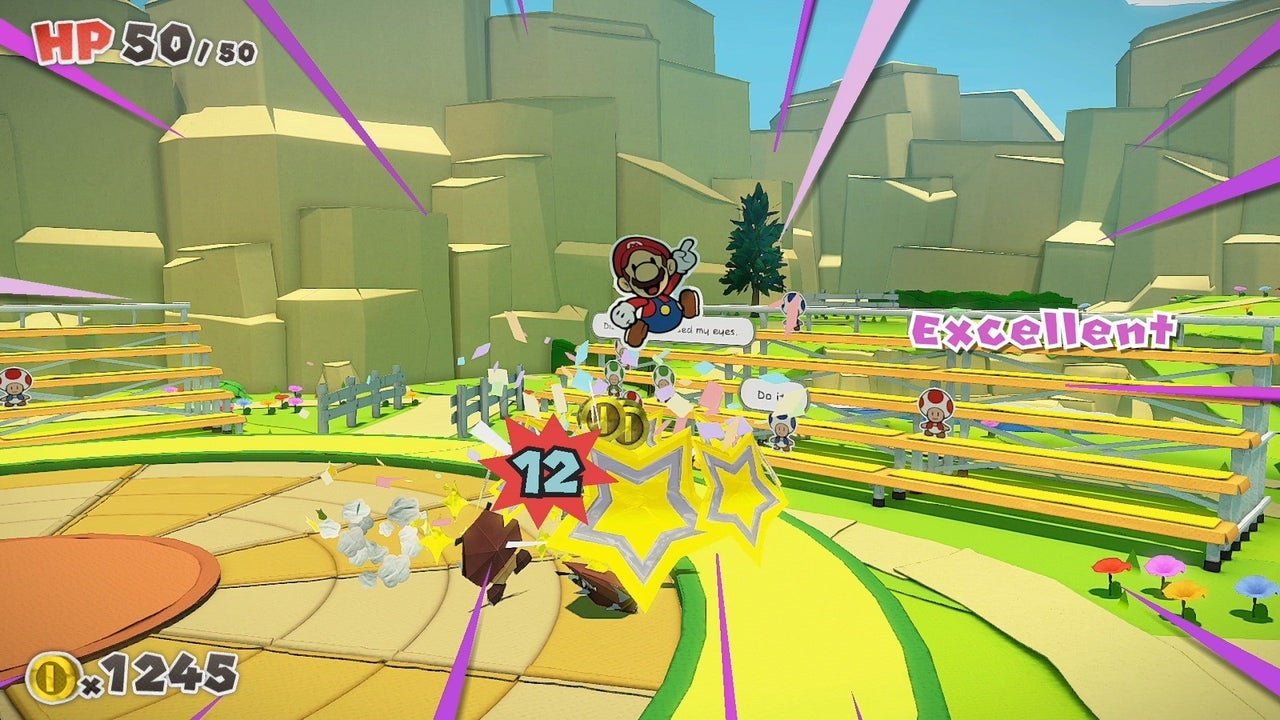 Speaking of boss battles, they work very differently from regular battles against common enemies. Instead of being in the center, Mario starts outside of the ring and arranges panels to form a path. Each boss fight is unique in how you navigate the board and has phases where you need to react accordingly. This could mean attacking at the right time like when a boss exposes their weakness, using the Thousand-Fold Arms, or by using Velumental powers-elemental abilities Olivia obtains by defeating bosses in temples.

Boss battles are the most demanding fights of course, but they’re also the most scripted. There’s no room for strategy and you have to assess the situation as battles go on. If anything is unclear, you can find envelopes on the board that provides you with hints or ask Olivia for advice. You can also pay Toads to show you what your path looks like with a dotted line before ending your turn.

While the combat is shallow, the game shines with its settings, mini-games, and various story segments. There’s a part in the intro where you first enter Toad Town. It’s abandoned and the song that plays is mysterious, chilling, and wondrous. It’s one of my favorite Mario songs hands down. There are a lot of fun moments in the game that uses music, both comical and beautiful, making the soundtrack a well-deserved focus.

Exploration was also enjoyable and pays off if you venture out. There are tons of treasures to find as well as hundreds of Toads that make traveling through each area fell less like a very fleshed out environment. Each Toad has a funny line to say. They’re all very quirky and aware of their awful situations-like being folded into bugs, fish, or stuck in weird places like on the back of signs. There’s also a museum located in Toad Town where you can view your collected treasures, spend points looking at some in-game art, listen to music, read about the characters, look at the enemies you’ve faced, and view in-game achievements in the form of trophies. 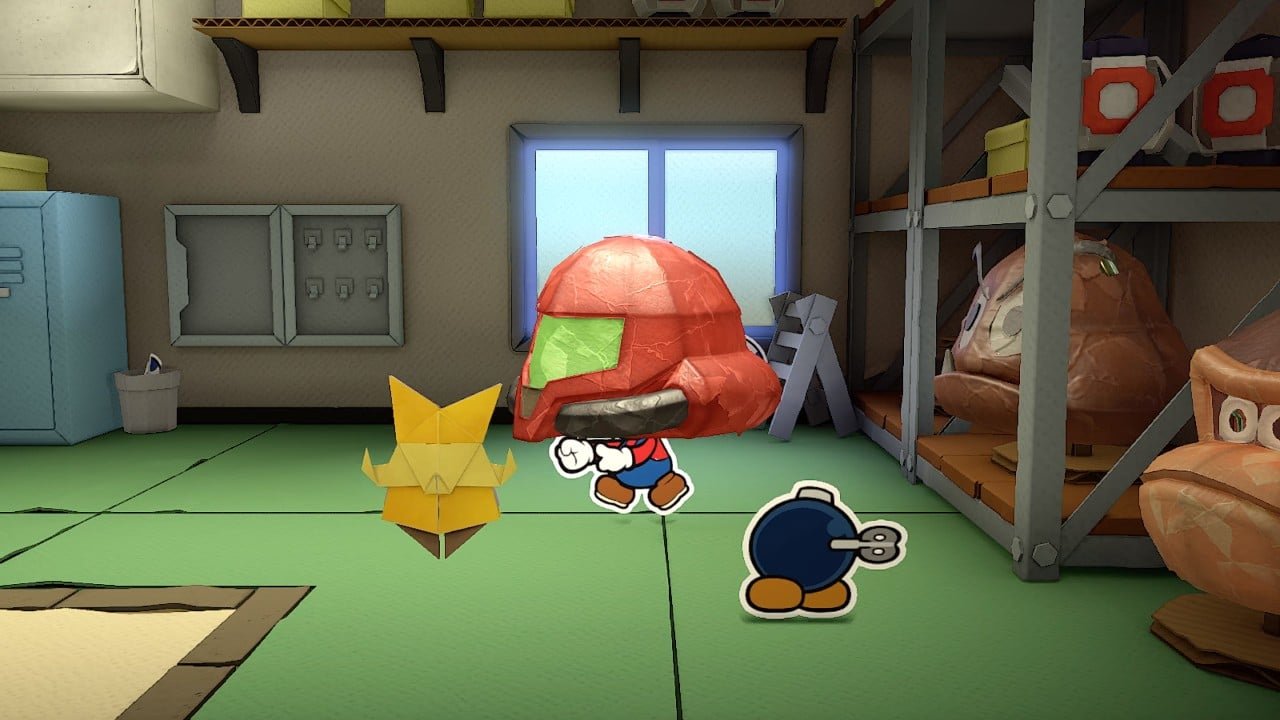 Some of the game’s best moments are all in the story. The settings of the game, while not high in concept, are exceptional in fun and execution. You’ll be going to exciting locales like a ninja theme park, a hotel in the desert, an abandoned ship, and more where the game’s personality and imagination really shine. There’s also a lot of care put into how funny and memorable the side characters can be, even if their designs aren’t that memorable. Each character has a quirk that makes them likable and fun to talk to, like a massive tree that breaks out into song and dance, a Bob-omb that loses his memory, a theater-loving arts and crafts boss, and so many more. There’s also your tried and true origami traveling companion, Olivia. She struggles deeply with her brother’s evil goals but always tries to make the best of things. She carries most of the conversation on your journey and by the end, she was definitely one of my favorite characters from any Mario RPG.

Paper Mario: The Origami King is a joyous adventure filled with tons to explore and an incredibly charming cast. It’s let down by shallow combat and poor padding that can make the experience drag. However, it’s still an overall fun journey worth the experience.

Paper Mario’s latest outing on the Nintendo Switch is a very charming but shallow adventure in a gorgeous, handcrafted world.