As we grow closer to the end of the current console generation, players are getting ready to say goodbye to their PlayStation 4s as we look to the future of gaming. But, while we wait for the PlayStation 5 to come out the studio behind the popular Infamous series Sucker Punch, has brought to us what can only be described as the swan song of the PlayStation 4 in the form of Ghost of Tsushima.

Ghost of Tsushima is an open-world, action-adventure game that is sent during 13th century Japan upon the titular island of Tsushima. You follow the story of Jin Sakai of the Sakai clan as he travels through the war-torn island to recruit strong and able fighters to take on the Mongol hoard that has invaded. During your travels, Jin will have to rely upon the skills he has learned over his life, as well as picking up some new tricks to make sure he survives.

A major theme of Ghost of Tsushima is learning to adapt, and throughout his life, Jin has been taught to always face his foes head-on and when he lands a killing blow he must look his foe in the eyes to maintain his honour. However, being impossibly outnumbered, Jin realizes that striking from the shadows “like a thief” is the only way to free his island from the Mongols.

The first thing I want to get out of the ay is the visuals. While the graphics don’t completely make the game, I do feel inclined to point out that this game is stunning and a real testament to how far a skilled developer can push a console to its absolute limits. All the while making my PlayStation sound like an apache helicopter in the process. The Island of Tsushima feels truly alive with the fields of grass slowly swaying in the breeze, the slight glint of sunlight through the gaps in the trees illuminating the well-trodden footpaths on the ground that forever guides you forward. Everything about the design of the island and its inhabitants tells a story making the island of Tsushima feel alive and lived in, the last time an in-game world felt this alive was in Red Dead Redemption 2. The detail on display is astounding and it really incentivizes the player to explore the world to see what you can stumble upon.

Anyone who has played a Sucker Punch game in the past will notice that setting of Ghost of Tsushima is a radical departure from the urban design seen in the Infamous games, this shift in design philosophy has also brought some interesting ideas to the forefront. One feature that I’ve fallen in love with is the Divine Wind system that replaces the traditional waypoint marker/ minimap design that’s been standard pretty much since the inception of the open-world game. Going back to Red Dead Redemption 2 again for a moment, one of the biggest irritations I had with that game was how you had this beautiful open world that was carefully crafted to draw you in but you would spend about 90% of your time staring at the little circle in the corner to see where you had to go next, which detracts from the immersion in my honest opinion. In Ghost of Tsushima, the direction you’re given is entirely within the world of the game so your eyes are always fixed on what’s happening in front of you.

The way the Divine Wind system works is once you have a location selected on a map you can swipe up on the touchpad to activate the Divine Wind which blows in the direction of your destination, while this system is great for immersion it’s not without its problems. The wind lasts for a few seconds at most so you’ll find yourself swiping up a few times on the way to your destination which can make long journeys a little irritating and it’s not 100% precise so if you’re looking for an exact location you’ll find yourself wandering an area for a few minutes until you find it. If I were to improve this system I would have it so you can swipe up once to activate the wind and it stays on until you swipe again, you could argue that this isn’t realistic but I’d like to point out this game also has flute music that changes the weather so swings and roundabouts really. 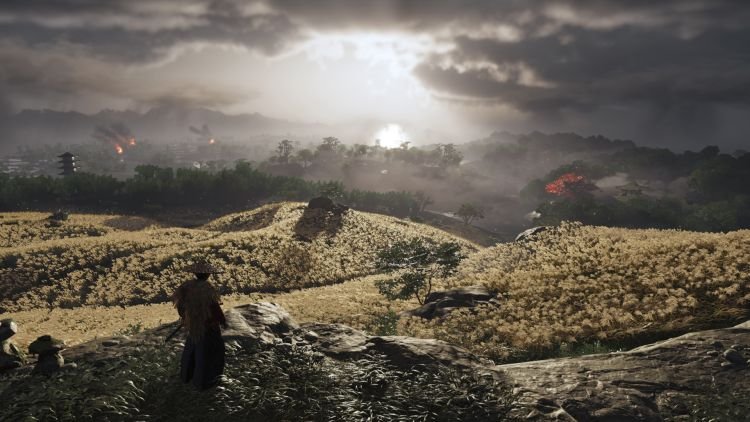 On the gameplay side of things, Ghost of Tsushima doesn’t reinvent the wheel but it’s a perfect example of how that’s not always required. Combat is your standard affair of striking, parrying, and dodging with an emphasis on timing your attacks so combat is mostly tactical, but the rank and file enemies can be cut down quite easily by mashing your light attack. As you progress in the game, you start to come across stronger enemies that require more finesse, so learning how to block and parry on the weaker enemies is recommended before you get shafted by the higher level enemies with combos that last half a dynasty.

Combat is very fluid and responsive with that added flair that you see in the old Samurai films to give it that extra layer of authenticity. You can also engage in a standoff that involves you walking up to a group of enemies and hitting up on the d-pad when the prompt appears. Once you have approached the enemy you hold the triangle button and you wait until they go to strike, once they’ve fully committed to an attack you release the button unleashing an instant kill attack in what is probably the coolest thing I’ve seen all year. Once upgraded you can combo this attack up to three times for that extra level of cool.

In addition to your offensive prowess, you also gain access to a plethora of stealth abilities that can be the difference between life or death. A lot of the stealth mechanics in Ghost of Tsushima reminds me of Assassin’s Creed or Shadow of Mordor so if you’ve played either of those games you know exactly what you’re in for; lots of sneaking up behind and hitting the square button to end some poor fool. As you progress and grow your legend you’ll unlock additional equipment such as kunai and smoke bombs that can be used to gain the advantage in combat or stealth so expect to get more creative as your journey progresses.

I’ve personally taken to whittling down enemies from a distance with my bow and then getting in close to get some stealth kills and then to finish it off I call out the remaining enemies to finish them in true samurai fashion. There’s a wealth of ways you can engage in combat and it never feels overwhelming, though I’ll admit that your stealth options at the beginning are very limited and it’s so easy to be detected. Yet, It’s very rewarding when you clear a camp without a single sound, it just feels amazing. 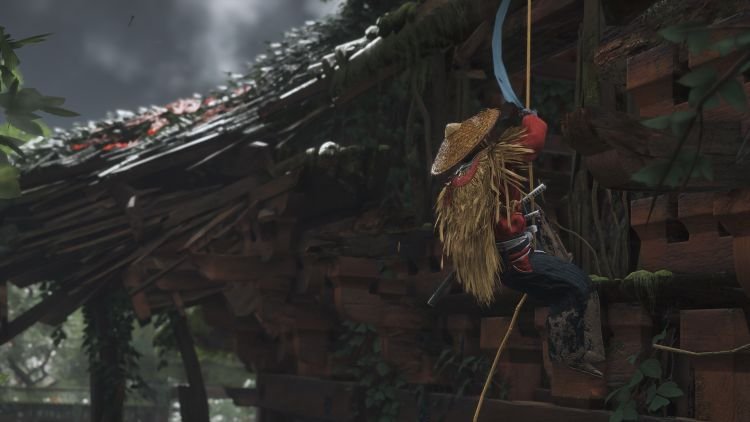 Praise aside Ghost of Tsushima does have its drawbacks that do need to be mentioned, most notably the climbing can be really imprecise at times. There were too many times I was climbing up to a shrine and performing a jump didn’t cover the distance or I reached the jump but Jin failed to grab the edge. Luckily, climbing isn’t front and centre in a lot of sections, but it does make exploration a bit of a pain at times.

Related:  Games I should have played in 2020 - Keith's Picks

I won’t go into too much detail about the story because I don’t want to spoil anything but I will say it’s a fun story to follow. The basics of the story are the Mongols have invaded the Island of Tsushima as a staging point to invade mainland Japan and after a bloody battle at Komodo beach where the Samurai marshalled all their forces to either stop the Mongols or die trying. The Samurai lose leaving only Jin Sakai and Lord Shimura as the last surviving Samurai on Tsushima island. Jin eventually manages to escape from the battle with his life, while Lord Shimura ends up been captured, leaving Jin with no option but to rescue him in order to liberate Tsushima.

I’ve only watched a few Samurai films in my life so I’m not an expert by any means but you can quite clearly see the inspiration; a lone Samurai against what seems like an unbeatable foe using only his wits and skill with a blade to pull through. Ghost of Tsushima is a story of maintaining hope against all odds and it’s also a story about how all it takes to save your home is a handful of people with a will to fight for it. 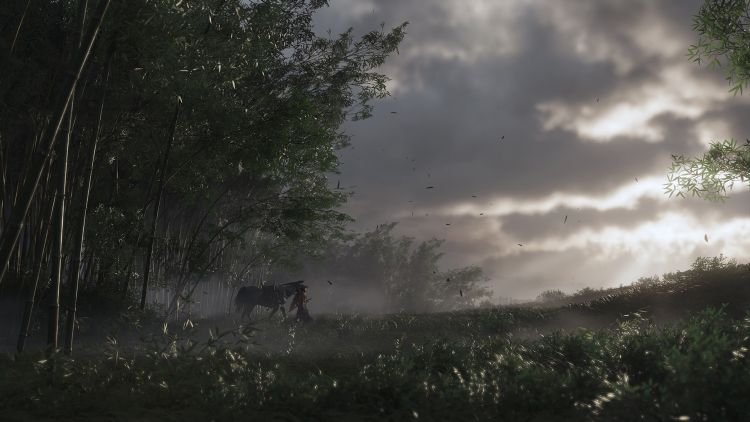 Overall Ghost of Tsushima is an engaging experience that sucks you in from the get-go, I haven’t had this much fun exploring an open-world game in a while and while I will admit that most of Ghost of Tsushima’s mechanics and gameplay aren’t unique. It’s quite easy to glance at it from a preview and say it’s like blank but in Japan and while statements like that have some truth to them, it’s not 100% accurate.

Ghost of Tsushima is a game that has used a lot of tried and tested mechanics from other games but it has also avoided the common mistakes that a lot of similar titles have fallen into, the map is smaller than the past few assassin’s creed titles but it has more interesting encounters packed in to make sure traversal isn’t tedious, it has a level-up system the unlocks new skills like every RPG ever but each ability you unlock is interesting and gives you new moves rather than the bog-standard ‘do 5% more damage’ skills that you get in most RPGs.

What I’m basically saying is Ghost of Tsushima doesn’t tread new ground in a lot of ways but its design is the culmination of several years of refining what works and what doesn’t to create an open-world action-adventure game that is just a joy to play on almost every level, is it perfect? No. Is it brilliant? Yes.

Step into the beautifully realised island of Tsushima as you fight with every trick in the book to free your ancestral home from the Mongol hoard with blood, sweat and a lot of backstabbing.