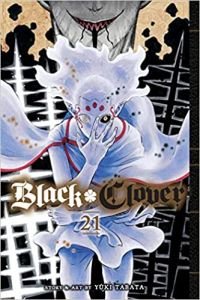 I hate to say this but I am going to flat out state that I was disappointed in this volume of Black Clover. I was looking forward to a glorious grand battle between Asta/Yuno and Patry (or is it Licht? I can never keep this straight. The elf inside of William Vangeance’s body!) and then, suddenly, a magic stone was placed and a Devil appears. Apparently, this Devil was responsible for everything that happened with the whole elf resurrection plot from the very beginning. All of the build-up for the past twenty volumes of Black Clover seems like it was tossed aside in favor of introducing a new big bad character for everyone to fight… one that is incredibly overpowered at that.

So, Patry gets defeated but in the process of trying to change him back to William Vangeance, they create a half Patry/half Licht? I believe it’s still Patry with Licht’s appearance but he’s now half-elf and half dark elf. Apparently, he wants to make amends and joins in on the battle against the Devil. Things aren’t going so well so it’s now time for a plot device!

The bird, Nero, appears in front of Finral and asks to be taken to the bones of the devil. After Finral is freaked out by a talking bird, he uses his spatial magic and sends the two of them there. He takes all of the magic stones and places them on the head of a statue and unseals Prince Silvamillion, the First Wizard King… oh and Nero is actually a girl named Secre and she transforms back as well. We get some backstory on the two of them and how they sealed Zagred (the Devil) in the past and now they return to the battlefield in order to stop him again and that’s where our volume ends.

So, we went from Asta/Yuno vs Patry into Zagred showing up and defeating Patry to failing to restore William Vangeance into Patry helping them to sudden teleport, stone placement, and Silvamillion resurrection? Sorry, but that was one of the most contrived plot points I have seen out of Black Clover. All of it happened so quickly and without any explanation whatsoever.

Related:  Not Your Idol Vol. 2 Review

Okay, so we have Zagred, a devil who manipulated everything from the very beginning between the humans and the elves. The humans killing the elves? Yep. Zagred’s doing. The whole resurrection campaign by the Eye of the Midnight Sun? Yep. Zagred’s doing. Ruining a final battle to unveil his master plan all along? Yep. Yuki Tabata’s doing. I often complained that Black Clover borrowed a LOT from the Naruto franchise and it seems as if they’ve done it again. You might as well call Zagred Black Zetsu because that’s exactly the same thing Black Zetsu did. He manipulated everything from the very beginning and it was all his fault. The only difference here is there is no “Kaguya Otsutsuki” above Zagred….. that we know of. After everything that was just pulled from out of thin air this volume, I can’t really say that for sure.

Silvamillion was the first Wizard Kind and, apparently, right before his death, he had Secre seal him away. 500 years later, Secre, as the bird Nero, finds Finral, tells him to teleport her no questions asked, and then brings back Silvamillion by using UNGUARDED magic stones. You would think that these powerful stones which could bridge worlds would have some sort of protection but I guess with all of the fighting going on, they felt it was a great idea to just leave them out in the open for anyone to take. So Finral did and placed them into a convenient statue nearby which just so happened to be the seal for the first Wizard King.

At least we received a backstory on these two. Silvamillion was making great strides in gaining the trust of the elves until Zagred ruined all of that. We got to see the elves and their magic stones as well as the magic tool that Silvamillion and Secre made… which was used to defeat Zagred 500 years ago. We know what kind of person Silvamillion is and how Secre is his closest friend. We also got to see a better relationship between him and Licht as well. That part made sense in the context of things and it was probably the best part of this whole volume.

I don’t usually like to complain about stuff. I like to give it the benefit of the doubt but all of this is just too much. I was hoping for a grand final battle with Patry and we just get thrown a new big bad for no good apparent reason, made him the progenitor of everything that has happened until now, AND pulled out a plot device from out of thin air to balance him because he was made way too powerful… all within the span of one volume of manga.

I don’t really know how to feel about that outside of being disappointed. I mean, I guess I am disappointed because it’s now how I saw the battle ending. Plot twists are nice and everything but when they are done back to back to back like this, it just feels really sloppy. It’s as if Yuki Tabata didn’t put any thought into this. If they had hinted at Zagred all this time and then introduced him… like if the Eye of the Midnight Sun had a master they had to appease, it would have made more sense. If they had also spun legends about the first Wizard King and even hinted at something odd about his statue… that would have made his resurrection make even more sense.

Instead, we got nothing in the past twenty volumes and it made everything seem like it happened just for the sake of happening. I think that is my biggest complaint is that Black Clover and Yuki Tabata failed at storytelling 101, tried to create some shock moments, and ended up failing miserably. Maybe I’m wrong though? Maybe they were hinted at this entire time and I missed them because I spent more time trying to figure out what name to call these characters due to the whole elf name / human name thing which was incredibly hard to keep track of.

This arc was just a mess! Hopefully, it’ll end soon and we can get back on track.