The Tokise High School Koto Club has come a long way from its near disbandment nearly a year ago. Now, this group of underdogs has a real shot at playing and possibly winning on the national stage.

However, moving forward from this point, the club will need to face its toughest challenges yet. There are some out there who not only expect this team to fail; those people will do what they can to ensure that that happens.

But all those who oppose the Tokise High School Koto Club do so with the same miscalculation. They fail to realize that this team’s passion is real and not so easily destroyed.

2019, or more specifically, the fall 2019 season has seen a fair number of continuations to split-cour series. For reference, a split-cour series is when a long-form anime (24 to 26 episodes) is split into two installments with a break season in-between. Examples from this year include:

As I see it, whenever a show decides to do a split-cour release, it means the show-makers must have confidence that whatever story they want to tell can hook an audience hard enough to hold their excitement for the continuation for three months. Plus, when the continuation does come, it better justify why we needed to wait. Fairy Gone brilliantly failed at the former, and Bokutachi wa Benkyou ga Dekinai (though still fine) struggled at the latter.

In the case of Kono Oto Tomare, it knocked the whole split-cour stuff out of the goddamn park. The first season was quite excellent on its own, but the second was a beautiful beast. What season two was able to do was fully capitalize on what its predecessor laid out. It didn’t feel the need to retread what had already been done. Kono Oto Tomare 2nd Season used what was established to push the narrative forward.

Season two introduced Akira Doujima (voiced by Nao Toyama), and frankly, this wasn’t a character that would have worked in the first season. Although the issues and obstacles Akira faced were similar to those of Satowa Houzuki, how Akira needed to confront her problems required a solution that didn’t exist in season one, a fully realized Tokise High School Koto Club.

The first season’s primary purpose was to establish its main characters and get them to come together to form a powerhouse koto club. Although season one didn’t put to rest many of the club’s member’s deepest demons, it did put everyone on the path to conquer them. That determination came through when the club played at the Kanto Regional Tournament.

The Tokise Koto Club, from a story perspective, didn’t need to win this tournament. And spoilers for episode fourteen (the first episode of season two), they didn’t. All they had to do was declare that they were a force that needed to be reckoned with, and that was easily accomplished. From that moment, the club realized that their dream of playing in Nationals wasn’t a fool’s errand; it was within their grasps. If they had still existed up till then, any doubts about what the members wanted to do and who they wanted to do it with died.

Cut now to post-tournament and the arrival of Akira, who agreed to teach the club how to play to the koto properly. As a highly accomplished koto player, Akira, for reasons I won’t get into in this review, had grown jaded in her views about what it means to play the instrument. Thus, when she first met the club members, particularly Chika Kudou (who was still one of the best characters of 2019), she saw a bunch of delinquents. She wouldn’t even consider the possibility that their efforts at learning the koto were serious. Had Akira been in season one, she may have proven to be right.

However, the koto club quickly proved Akira wrong. Had these same characters faced someone like Akira in the previous installment, they would have been combative, deliberately disrespectful, and most would have probably given up. In season two, though, the club didn’t see Akira as a foe to face but as a necessary outlet to improve their skills. That earnest felt towards the instrument she once loved, reminded Akira why she ever started playing the koto.

Kono Oto Tomare was no longer a story of individuals. It became the tale of a single entity with a shared, unbreakable mindset.

And by the way, this was only about half the season. The other half consisted of the Tokise Koto Club’s efforts at the national qualifiers. This was where the series relied solely on everything it had done up to this point. There was no more the club could do to get ready. There would be no more of their backstories, no more of their flashbacks; there was no longer any time to do any reflection for this moment.

You rooted for the Tokise Koto Club because you wanted to see them win.

That was the strength of this season. That is the power that comes from a story that makes the effort to craft characters worth caring about. That is why Kono Oto Tomare will become a highlight of 2019.

Let me make this clear.

I cannot and will not deny the reaction Kono Oto Tomare 2nd Season got out of me. This chapter was impossible to put down, the story was fascinating to watch, and it was, overall, an absolute treat. I have nothing but high praise for it.

That said, there are plenty of segments you can skip. 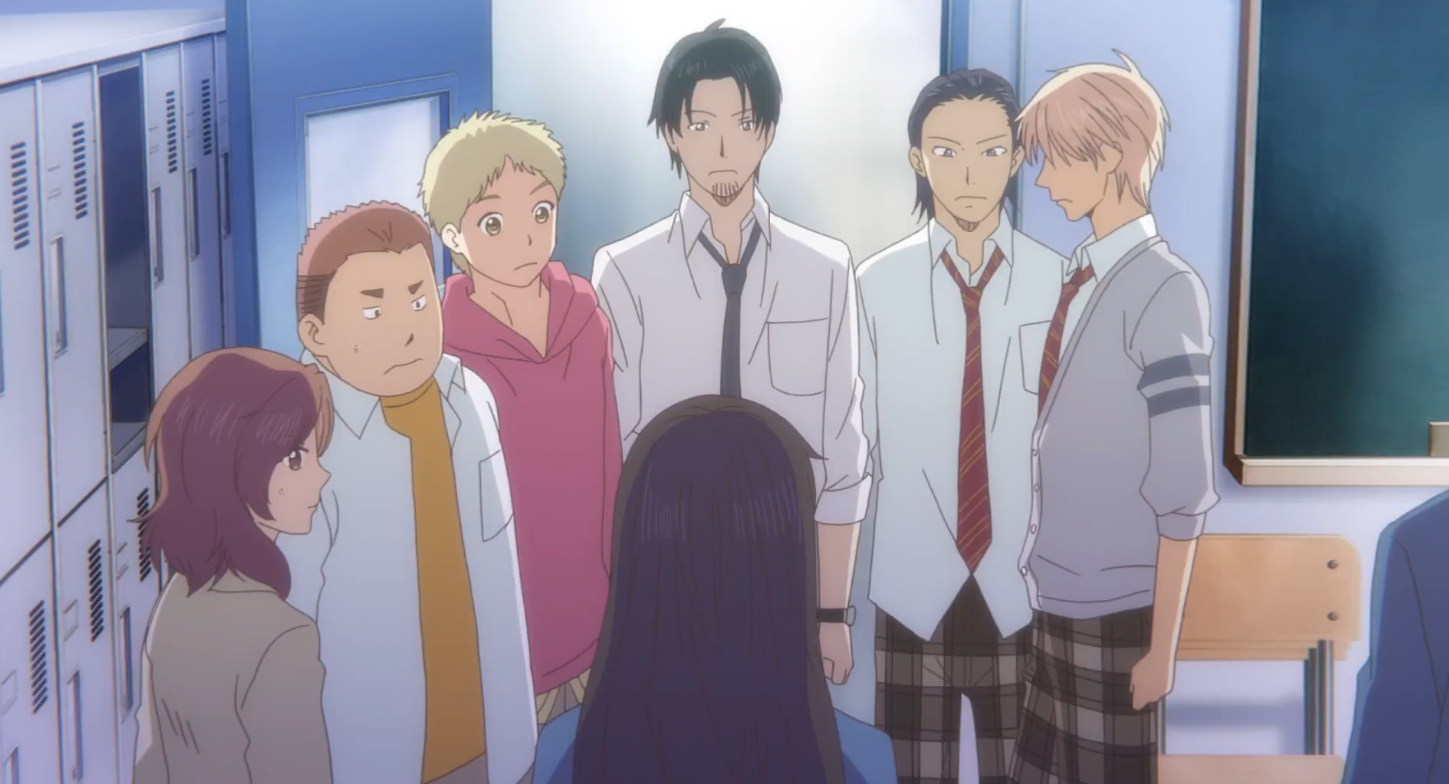 This became extremely prevalent during the national qualifiers. To give you the setup, each participating school was only given one chance to perform, and as it happened, Tokise High was second to last. Nevertheless, this part of the season consisted of a handful of episodes.

What to do in the meantime?

Well, Kono Oto Tomare’s answer to that question was to shove a bunch of secondary information into two episodes. Two episodes, mind you, that probably could have been turned into two full-length series.

Throughout this story, two rival schools for Tokise High arose. Both were heavy favorites in any tournament they entered, and they each had incredibly talented koto players in their respective rosters. As it was, though, these two other schools only ever mattered when there was a competition, and since this story focused mainly on the growth off Tokise’s koto club, there was little chance to get to know the personalities of these rivals. 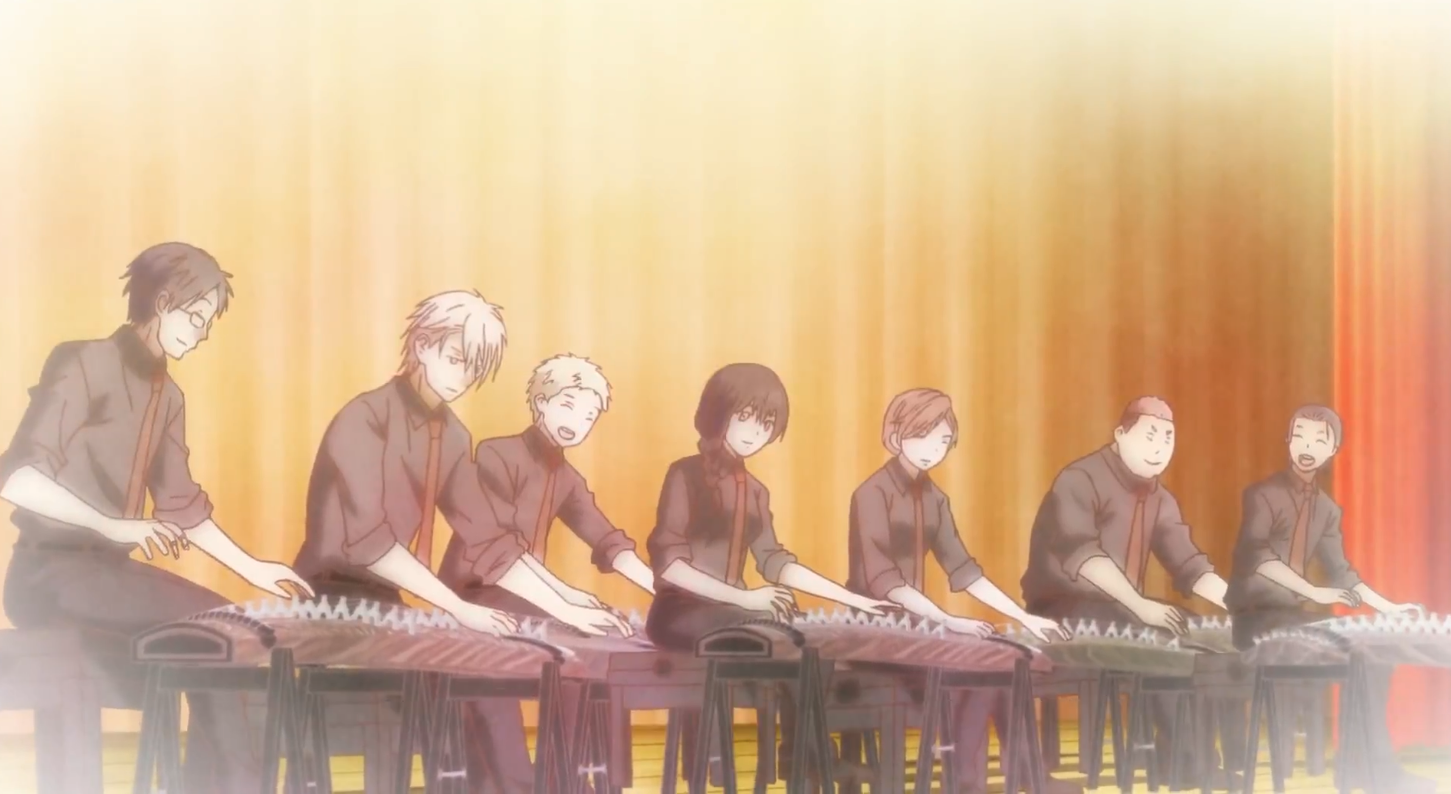 That was until season two dedicated two full episodes to providing an intensive crash course into why the other schools wanted to win. There was just one problem. Why did this series expect us to care?

We spent two seasons getting to know the Tokise High Koto Club. We came to know who the members were and what motivated them to get better. This was our team; this was the group we were cheering for in the end. Therefore, why, at the last second, should we be expected to be invested in two different schools who we would ultimately be hoping would lose?

This felt like padding. It was almost as if this season could have ended two episodes earlier, but it was required to meet a certain limit.

This isn’t to say these episodes were poorly made. On the contrary, they had the same level of care as the rest of the series. They were just pointless.

I want to say this series finished strong. However, I have a bit problem with that. Not with the word “strong.” Dear me, no. This was a phenomenal watch. No, I take more issue with the word “finished.”

This season left the door open for a third installment, and frankly, it would be a shame if we never got one.

With an outstanding story, amazing characters, and proper progression, this is precisely the kind of thing we should expect every continuation to do.

But these are just my thoughts. What are yours? Have you seen this series? How would you advise Kono Oto Tomare 2nd Season? Leave a comment down below because I would love to hear what you have to say.