Wataten!: An Angel Flew Down to Me Series Review: Seen, Done, But Not Broken 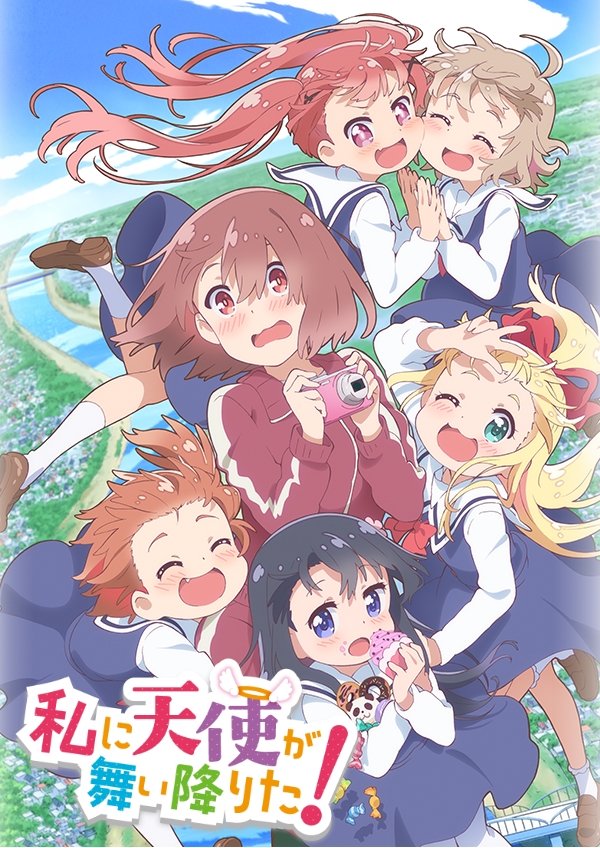 ***Warning, the following may contain spoilers for Wataten!: An Angel Flew Down to Me. Reader discretion is advised.***

Miyako Hoshino (voiced by Reina Ueda) is a college student and an amateur fashion designer who finds it incredibly difficult to talk with anyone she doesn’t know. The only person Miyako feels comfortable around is her fifth-grade sister Hinata (voiced by Rika Nagae).

One day, Hinata invites over her friend Hana Shirosaki (voiced by Maria Sashide). Upon first meeting Hana, Miyako believes she has been visited by an angel and is instantly overcome by the young girl’s overwhelming cuteness. After some persuading – a.k.a., bribing with sweets – Miyako manages to convince a hesitant Hana to try out some handcrafted cosplay outfits.

Due to her friendship with Hinata – not to mention Miyako’s amazing baking skills – Hana starts to come over quite often. These frequent Hana visits allow Miyako to get over her shyness little by little. Along with that, Hana begins to see Miyako as a reliable, older-sister type person.

However, Miyako’s awkwardness around people does tend to make things far more complicated then they need to be. 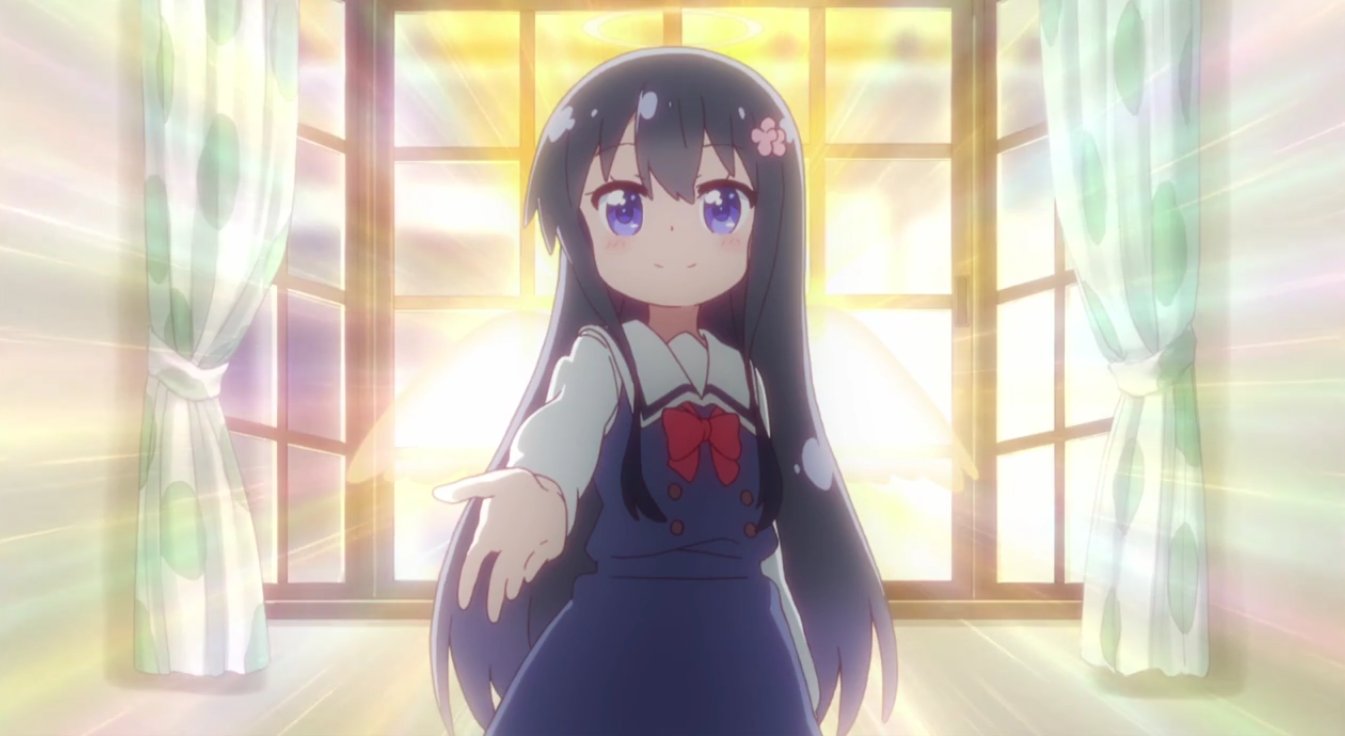 Wataten!: An Angel Flew Down to Me (Wataten) was fun.

That said, let me also add, things are getting a tad frustrating.

For some time now, I feel I haven’t written a slice-of-life review that was informative, unique, or insightful. Recently, these sorts of posts have been following a set pattern: 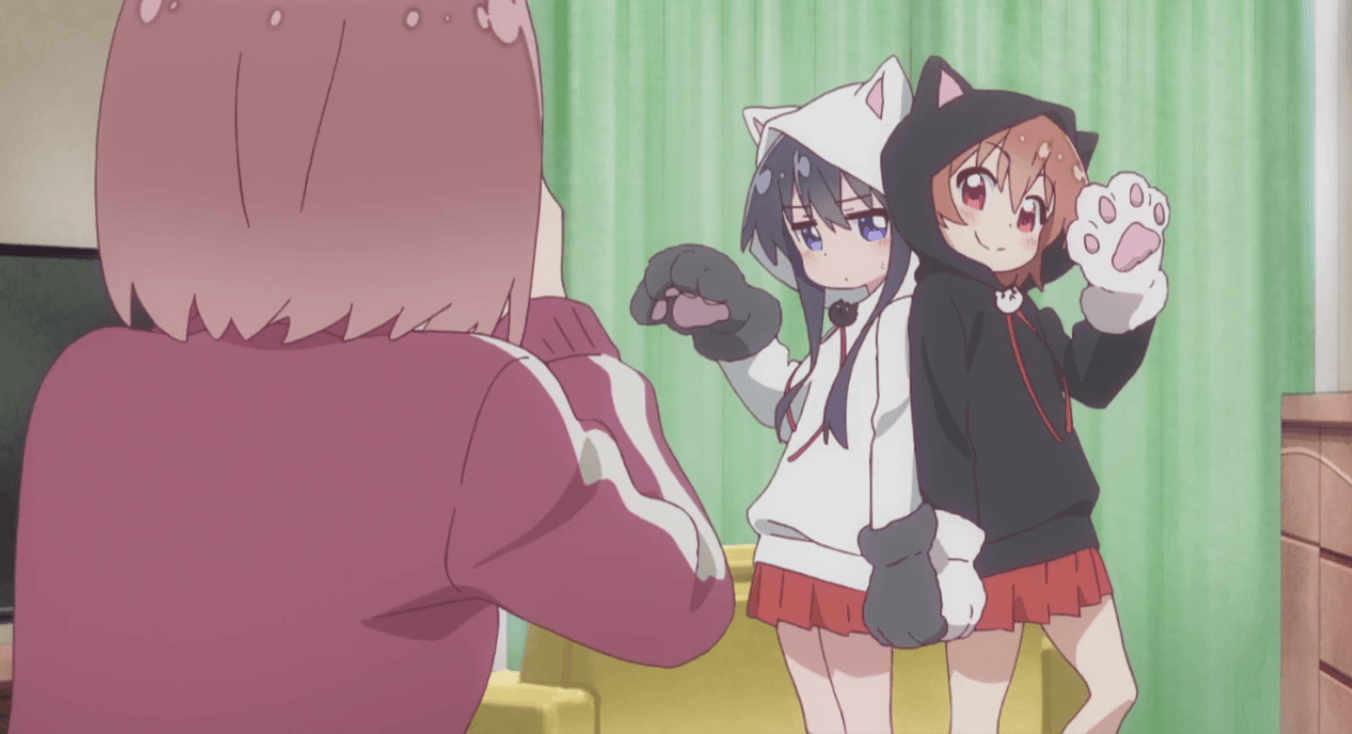 Some of you might read that and think, “Naturally. Anime is oversaturated with slice-of-life stories. At this point, if you’ve seen one, you’ve seen them all.”

I can neither entirely reject such a notion nor deny that I do find comfort in the slice-of-life genre. Plus, I am not going to sit here and claim Wataten broke the streak of stagnation. This was no game-changer, and you can expect much of the same type of praise I have given to similar shows in the past. However, there is – for me, at least – comfort in knowing this series had a firm grasp on the basics.

And stemming from a solid foundation, although Wataten may not have had the WOW factor I have been searching for, this show did have three outstanding elements in the forms of Hana Shirosaki, Hinata Hoshino, and their friend, Noa Himesaka (voiced by Akari Kito). In essence, these three girls were the result of what happens when characters are given actual personalities instead of one-note traits. 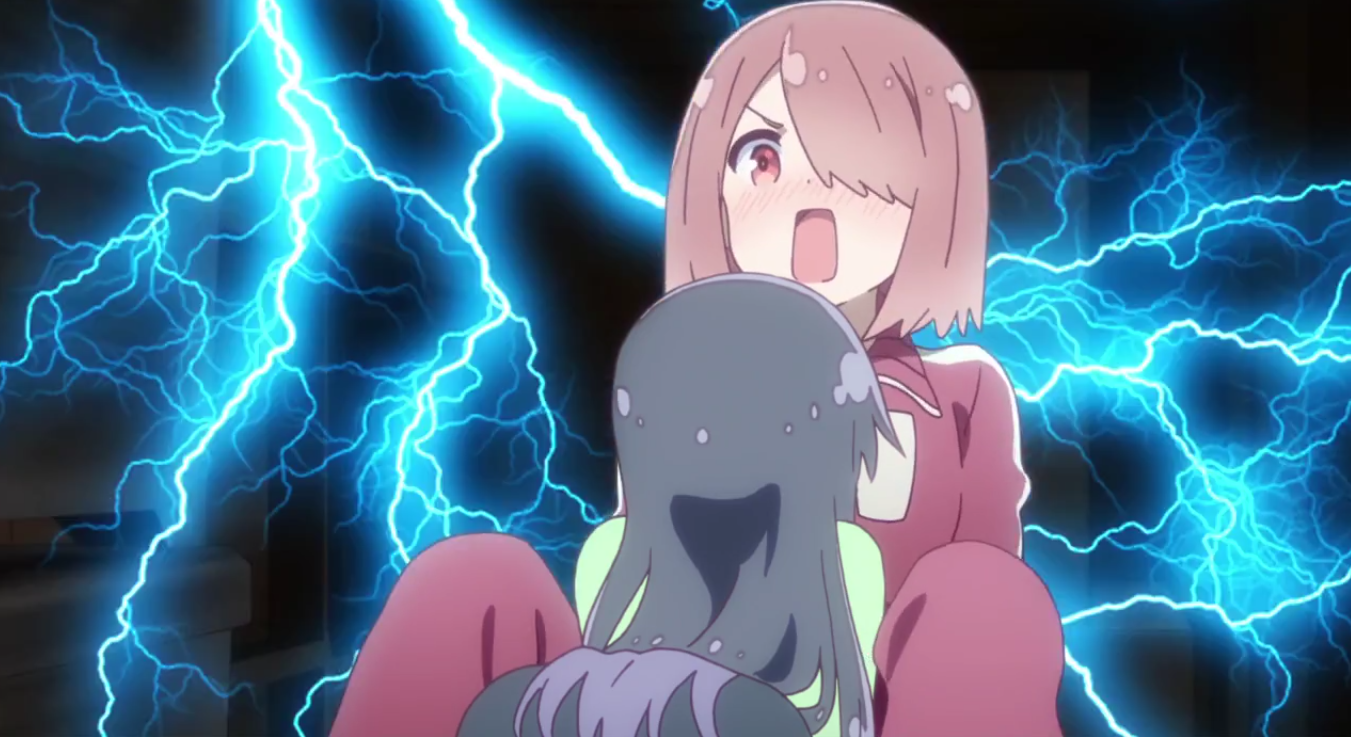 For Hana, Hinata, and Noa, they each had characteristics that served as the basis for who they were. Hana was cold, Hinata was energetic, and Noa was a diva. In other slice-of-life shows, even in ones I have liked and recommended, that would have been the extent of who they were. As such, it would have meant the trio always needed to be together so that two could compensate for something one might have been lacking in.

Hana, Hinata, and Noa were different; they were more. They had their own personas. None of them stayed entrenched in their primary traits. There were times when level-headed Hana could be a ditz. Happy-go-lucky Hinata was sometimes the voice of reason. Noa, in her vanity, made efforts to look out for the people she cared about. 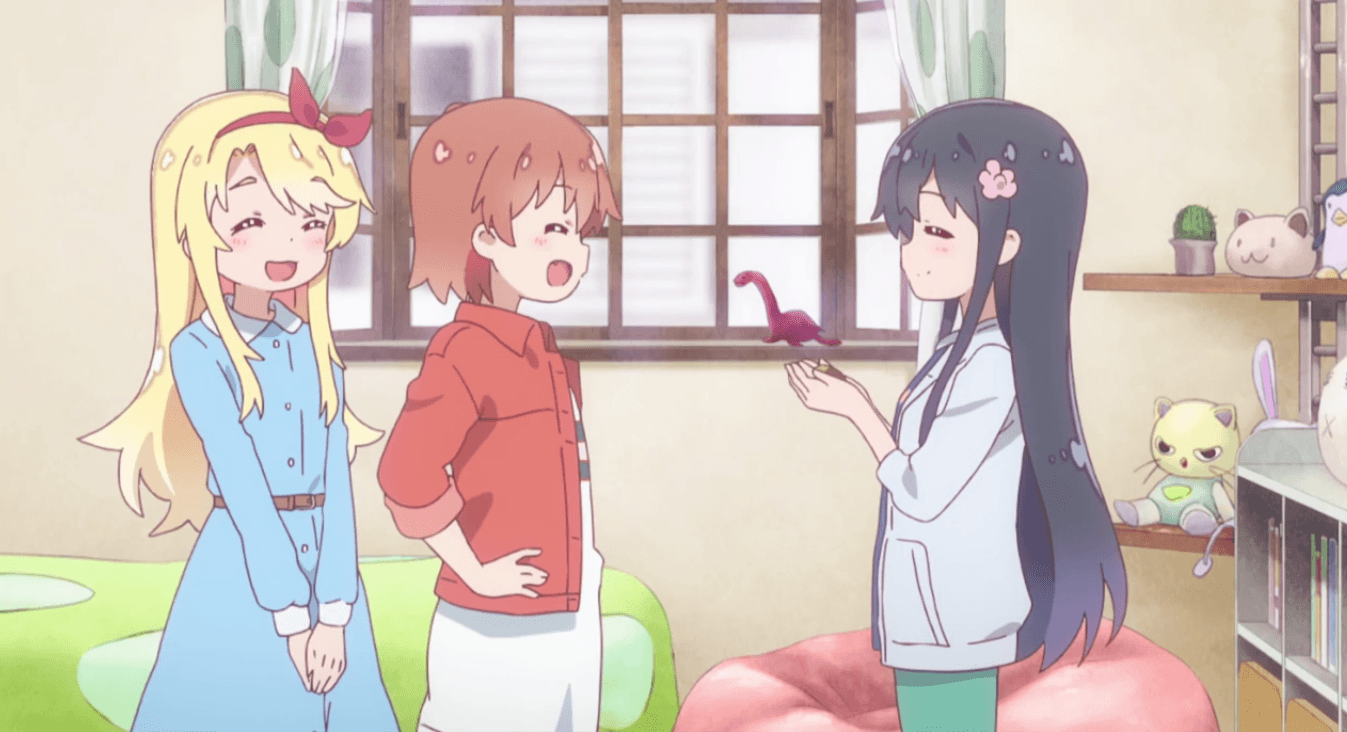 With three defined and individual characters, and not simply three parts of a whole, Wataten had far more variety than many of the more recent slice-of-life anime I have covered. For example, Hana would go off to do her own thing, and this show was still funny. Scenes consisted of just Hinata and Noa, and this series remained entertaining. Any combination of the trio was enough to hold everything together.

Related  Rakuten Viki Streaming Service Has Your Next Binge: J-Dramas

What I’m trying to get at is, Hana, Hinata, and Noa were what made Wataten, Wataten. They weren’t characters in this show; they were this show. Accordingly, jokes were more hilarious, sweet moments were more heartwarming, and everything was much better than the standard. 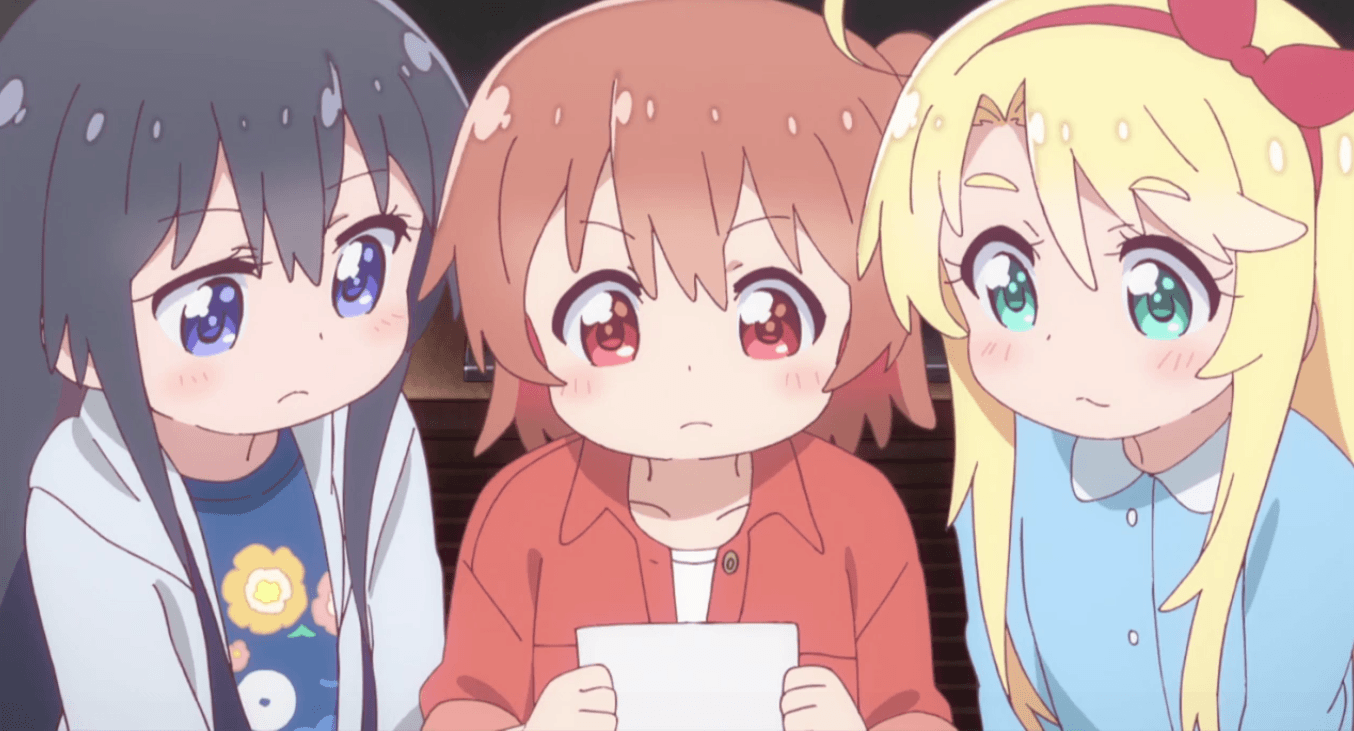 There were aspects of Wataten that never sat right. This series was sort of like choosing to carry either a pound of bricks or a pound of feathers. If you only look at the surface and don’t think about what is going on, then it would appear as though the two options couldn’t be any more different when they are the same.

In the case of Wataten, Miyako Hoshino happened to be a cute college student on the outside. However, if you were to replace her with a creepy thirty-something shut-in, then pretty much her entire behavior seen throughout this series would have been far less “adorable.”

For starters, what was the story behind Miyako’s crippling shyness? Any reason as to why she could hardly walk down the street without falling into a panic attack would have been better than what this show did – nothing. The way Miyako would try to weasel out of doing any task which required leaving her house came off as lazy and pathetic. And this was the person Hana, Noa, and Hinata – and of the three, Hinata had nearly deified her older sister – were meant to look up to? 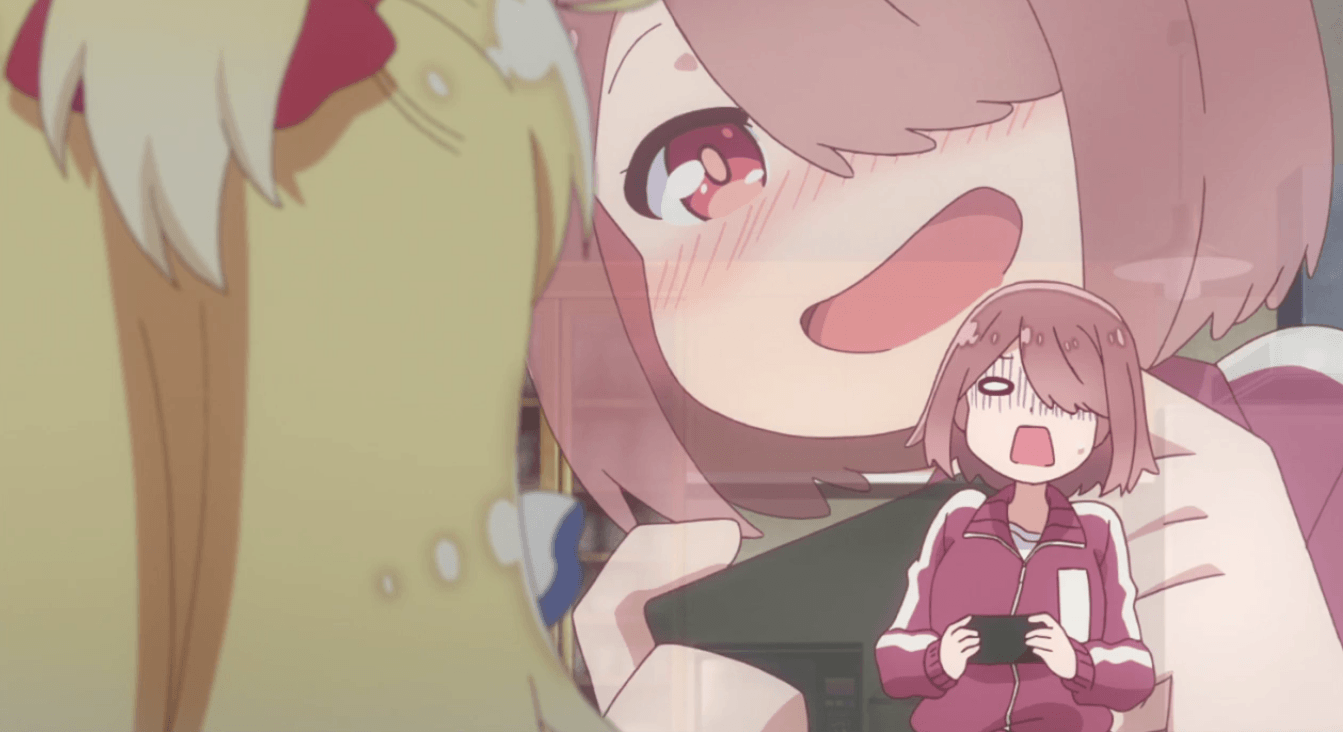 On top of that, Miyako’s obsession with Hana was precisely that: An obsession. Miyako was an adult woman who could barely control her emotions when she was in the presence of a fifth-grader. I have seen this type of character many times before. They are a part of what I like to call, the pervert-trope.

While Miyako only ever wanted to dress Hana up in cute cosplay, how many times was Miyako apprehended because she was mistaken for a shady sleazeball? The answer: More than once.

Related  Our Battle Has Just Begun! Episode 1 Available for Nintendo Switch and Steam

Wataten only managed to balance out Miyako’s grey-area personality by introducing a character who had spent several years stalking Miyako. That was…better? I’m kind of at a loss here.

All that notwithstanding, I will admit, Wataten did get a laugh out of me with Miyako. But I don’t want double standards to be a thing in my reviews. Miyako didn’t do this series any favors. 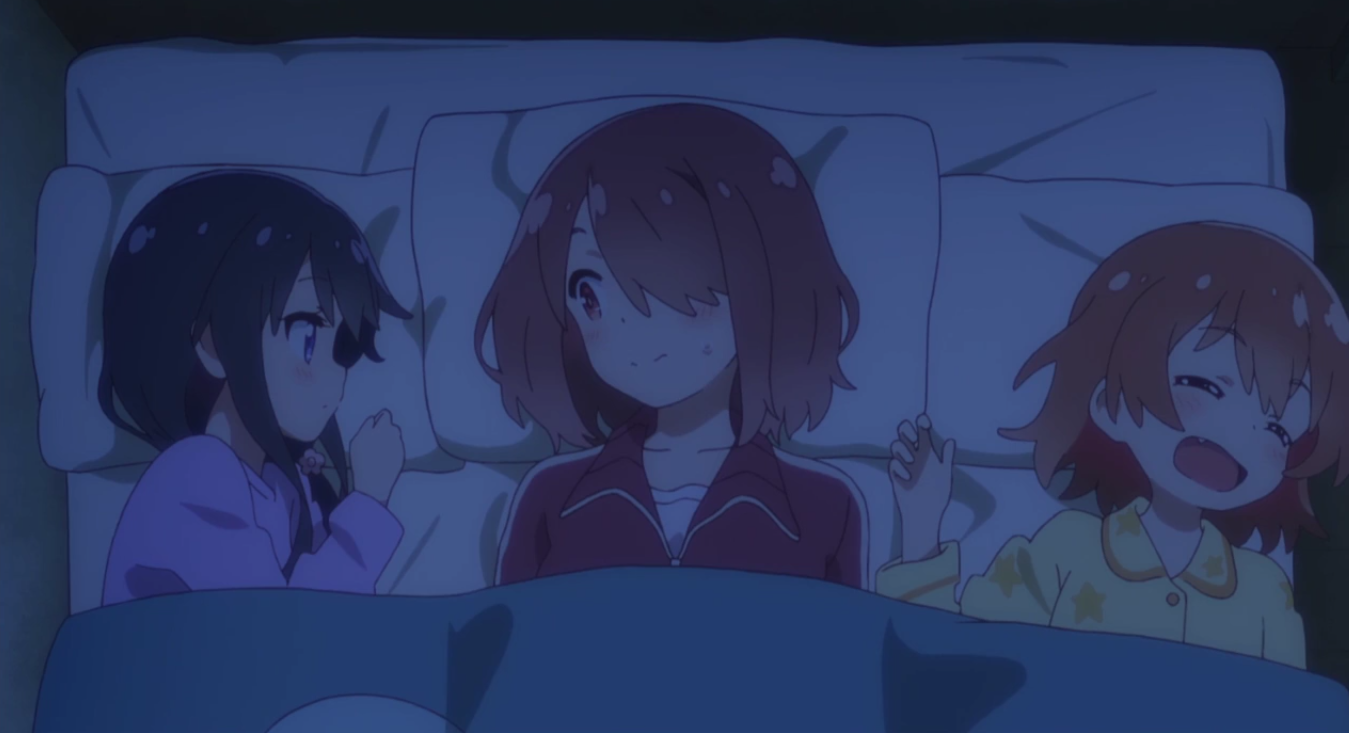 For a slice-of-life anime, this series did do many good things.

There were interesting characters. The jokes were funny. There was a charm to this show. Overall, I would say this was an above-average entry for its genre.

That doesn’t mean this series was free of misguided elements. Trust me; there were plenty of those to go around and then some.

In the end, though, I cannot deny I enjoyed my time with this show. Thus, for my fellow slice-of-life fans out there, Wataten!: An Angel Flew Down to Me has earned a recommendation.

But these are just my thoughts. What are yours? Have you seen this show? What would be your advice concerning Wataten!: An Angel Flew Down to Me? Leave a comment down below because I would love to hear what you have to say.